- The songs of Scotland, Vol. 1 : a collection of one hundred and ninety songs 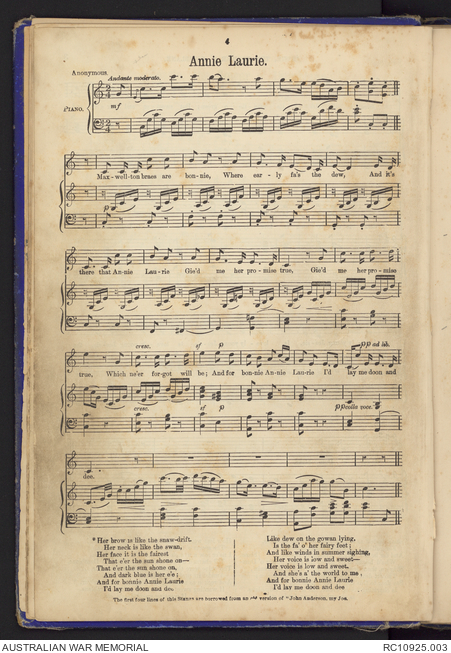 Sheet music for the song titled 'Annie Laurie'. There were various modifications to the lyrics over the years, but this version of the song is featured in the book titled 'The Songs of Scotland Volume 1', which was printed in circa early 1900s and edited by Brown and Pittman. The footnote in the book states that the second verse of the song is actually from an early version of 'John Anderson My Joe'. The lyrics of this song focus on the beauty of Annie Laurie and the promise that she made at Maxwellton.

There is still debate over when and by whom the song was originally composed. Variations have been attributed to William Douglas, Allan Cunningham and Lady John Scott. The provenance of the origins of the Scottish poem/song 'Annie Laurie' is not able to be verified through archival documents. However, it is popularly believed that the song was based upon a poem written in the late 17th Century or early 18th Century by William Douglas about his unsuccessful romance with a Scottish teen called Annie Laurie. Another alternate opinion is that the words were written by the Scottish poet and author, Allan Cunningham - as the first known written version appeared in 1868 on page 108 of 'Four books of choice old Scottish ballads 1823-1844'.

It is reported that in 1890, Lady John Scott (nee Ann Spottiswoode) wrote to the editor of Dumfries Standard and claimed that she composed the tune, and wrote the ‘modern words’ for the song 'Annie Laurie'.

The song titled 'Annie Laurie' received its first mention in Australian newspapers on Monday 25 June 1849 in relation to an upcoming performance of the song by Doctors McGregor and Meymott at the Prince of Wales, Melbourne. The song retained its fame and was enormously popular in Australia during the First World War with numerous mentions of the song being performed at school concerts, social events and war related community gatherings. This was especially true of fundraising events organised for the war effort. One of the earliest mentions was a performance by Miss D Morrison at the Palace Theatre, Cairns on Sunday 30 August 1914, at a concert that raised about 30 pounds for the Patriotic Fund. A similar event was held by the Bach Society in Adelaide on Wednesday 2 September 1914, when the song was performed by Miss Grace Medlyn at a concert where half the proceeds were donated to the Red Cross. The song was also popular with children, with Eileen Burke performing the song at a children's dance organised to raise funds for the Red Cross at Warwick, Queensland in September 1914. The song was also performed in a concert by students of Mr Lampe at Golden Point State School, Ballarat, on 10 September 1914.

The song was also performed at patriotic fundraising events and events especially held in the honour of locals who enlisted in the AIF. At one such farewell concert, Annie Laurie was performed as an encore by Mr J Callaway at the Cobden Public Hall on Tuesday, 8 September 1914, to farewell Major Cyril Wilberforce St John Clarke who served with the 4th Light Horse Regiment. A sum of approximately 8 pounds was collected during the evening for the Patriotic Fund. John Stanley McBain, of Frankford, was another to be farewelled at a patriotic concert on Friday, 4 September 1914, that raised 14 pounds. McBain served with the 5th Divisional Signal Company. The farewell held for Mr Edward Campbell Begbie, at Pyree School of Arts on Wednesday, 13 January 1915, featured a performance of the song by Miss L Ryan. During the speeches that occurred afterwards, it was mentioned that Begbie, who served with the Australian Veterinary Hospital, gave a moving speech recognising the suffering of the mothers, sisters and other relatives who were left behind by those who volunteered. At another farewell held at the Caledonian Hotel, Wyrallah, New South Wales, on Saturday 30 January 1915, the song was performed by Miss Conroy, in honour of Sergeant Joe Pestell.

One of the happiest performances of this song during the First World War occurred at York, Western Australia, when it was performed by a quartet at the wedding of Private Sydney Percy Vernon Harrison and Miss Jessie Campbell MacLachlan, on Wednesday, 1 August 1917. Harrison left Australia on 29 July 1918 and served with the Army Medical Corps and returned to Australia after the war.

'Annie Laurie' was also a popular song with Australian soldiers and appeared in several performances given by members of the Australian Imperial Force. One of the earliest published accounts of a performance by Australian soldiers was written by a member of the audience at an impromptu concert, described as the "usual singsong", in a tent at the Liverpool training camp during January 1915. Although the name of the performer is not provided, the 'never to be forgotten' strains of 'Annie Laurie' opened the concert, with the singer described as a 'creditable tenor' who 'certainly made the most of it'. Another early performance of this song was given by the 4/30th Battalion Infantry Mouth Organ Band during a concert aboard HMAT Orsova (A67) on the 25 March 1915 - whilst the ship was still at sea. Sale of the hardcopies of the programmes from this concert was donated to Marine Charities. The song was also performed by staff (‘Glee Party’) of No. 2 Australian General Hospital on the 5 April 1917 at Nord Pas de Calais, Boulogne in France. Whilst another performance of the song was done by Private Maclean at the No. 11 Convalescent Depot located at Buchy in France, on 30 May 1917. The lyrics also featured in a booklet titled "'Butler's Snowball" Songbook' which was intended to raise money for the Trench Comforts Fund and was connected with Lieutenant Colonel Charles Philip Butler. Inside the front cover, it is quoted 'For use at Camp Fire concerts arranged by Butler's 500 enroute to France via South Australia'. Butler later became commanding officer of the 43rd Battalion.

Of most interest, is the attention that this song received in Australian newspapers in connection with efforts to establish a song to become synonymous with the First World War. In all articles discussing this topic that appeared in Australian newspapers, the song 'Annie Laurie' always made an appearance. Annie Laurie was popular during the Crimean War, in both the trenches and with civilians, an old Scottish song that had been popularised in time to 'provide each brave British soldier with a satisfactory embodiment in song of his best girl at home.' The success of the contemporary 'It’s a long way to Tipperary' was attributed to the presence of her first cousin and hopeful songwriters were advised that if they want to write a marching song for Australian troops, then, 'Don’t forget the girl'. The sentiment was immortalised in a poem titled 'The Song of the Camp' by Bayard Taylor, which was published in several Australian newspapers during the First World War, and the event that led to the penning of this poem was described by AM in the Weekly Scotsman and reproduced in The Telegraph (Brisbane), on Wednesday 6 January 1915. The event occurred at Sebastopol, when a request was made for a song and a corporal of the 2nd Battalion Rifle Brigade began to sing 'Annie Laurie' with the chorus taken up by the audience so that hundreds of voices performed in both 'exact time and harmony'. AM wrote that 'the heart of each singer was evidently far away over the sea', and this sentiment is echoed in Taylor’s poem, that although, 'Each heart recall’d a different name', they all sang 'Annie Laurie'.

It also seemed that 'Annie Laurie' was a popular song on both sides of the battlefield. One letter written by an anonymous soldier published in The Evening News (Sydney) on 23 February 1915, recounted they had heard the Germans singing 'The Watch on the Rhine', many times. He continues his account to say that some men claimed they heard a phonograph behind German lines, playing the distinct strains of 'Annie Laurie'.

The song 'Annie Laurie' continued its popularity in Australia after the First World War with many honourable mentions at welcome home concerts and concerts to entertain the soldiers. Driver E Mitton, who served with the 48th Battalion, was afforded a social event when he returned to Mount Gambier on 11 October 1918, where the song was performed by Miss Myrtle Beckman. A similar event was held to honour the return of Private W White at Candelo on Friday 6 December1918, where the song was performed as a duet by Sylvia and Dorothy Alcock. The Anzacs on Furlough Entertainment Committee organised a programme that featured a performance of the song by Lena Hammond which was observed to bring a smile to one veteran officer who had seen many campaigns. Possibly the biggest performance of this song during this period was given by Dame Nellie Melba at Melbourne Town to welcome home returned soldiers during the afternoon of Thursday 19 December 1918.