[Sheet music] The Battle Eve : Duet for Tenor and Bass 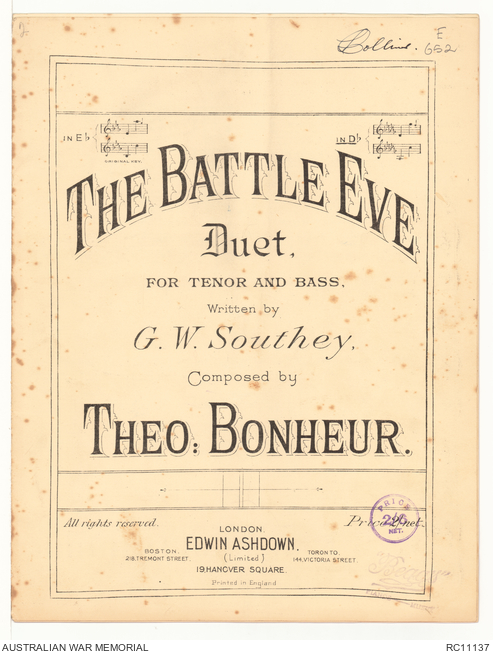 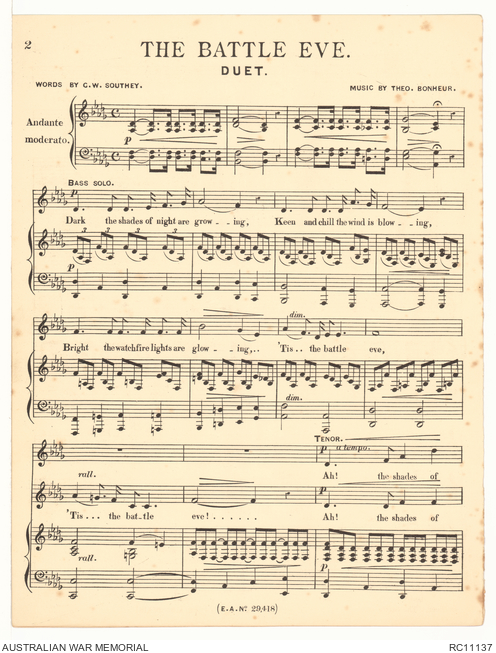 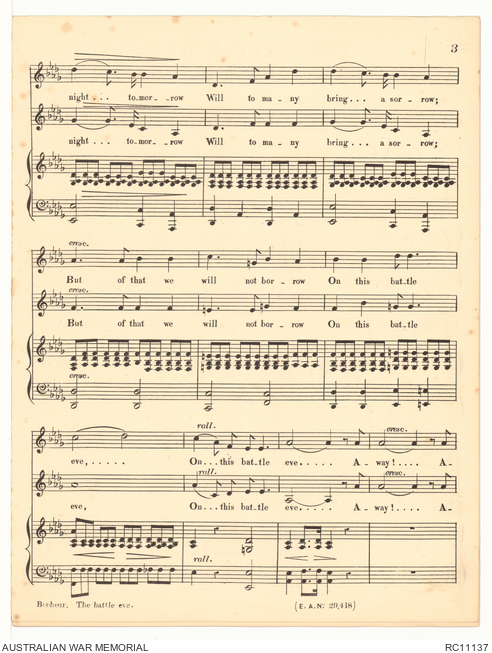 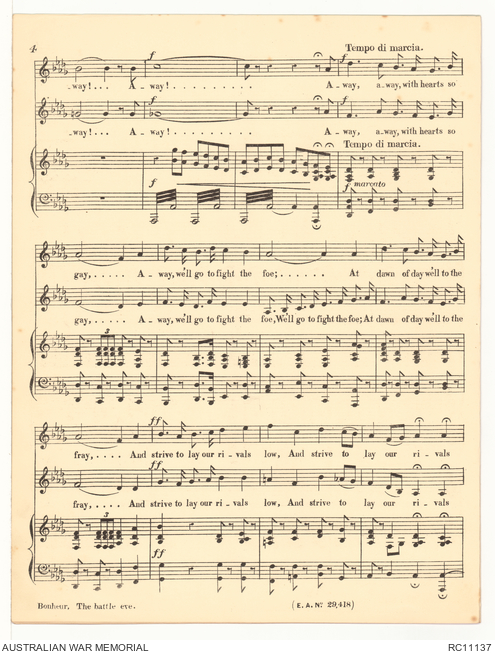 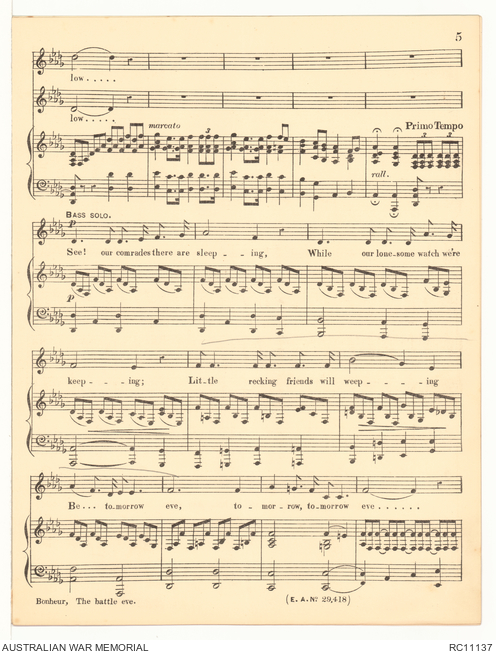 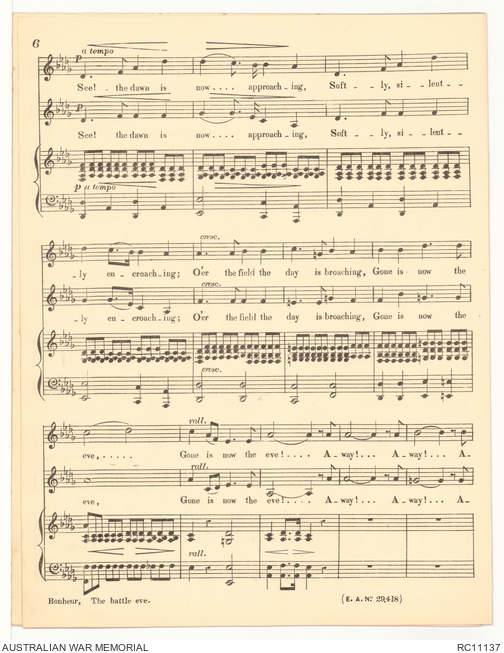 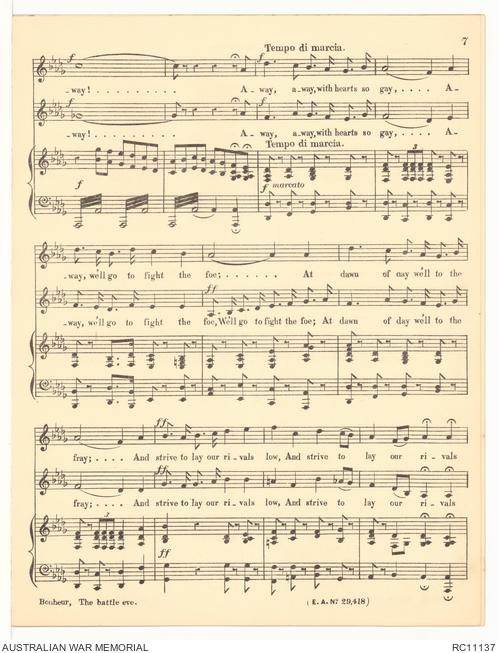 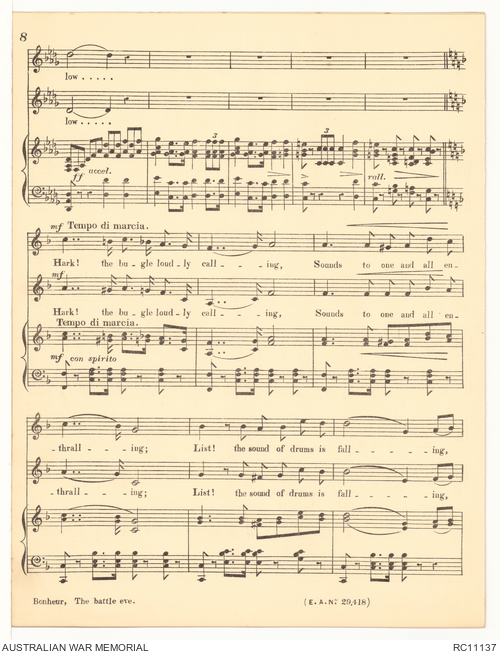 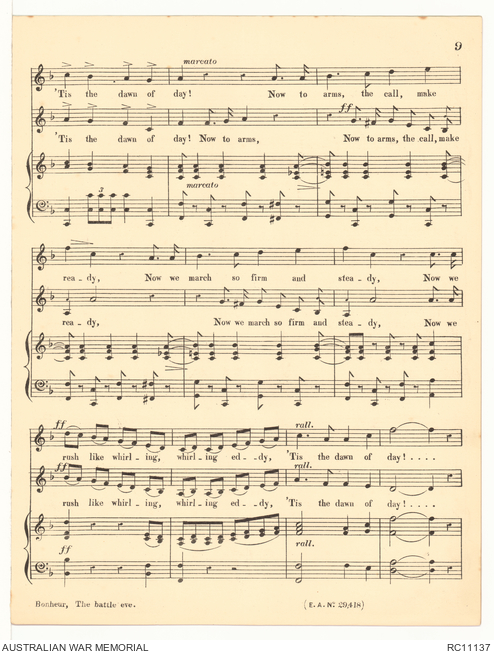 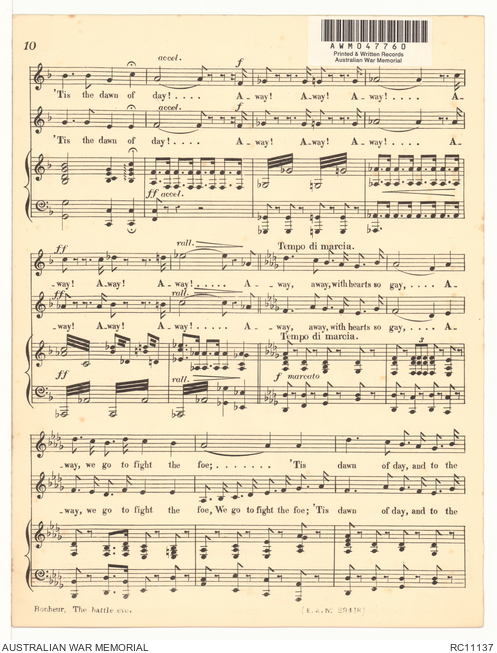 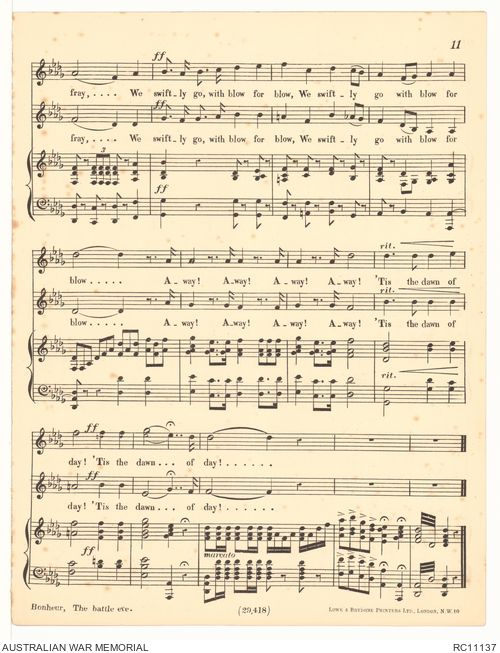 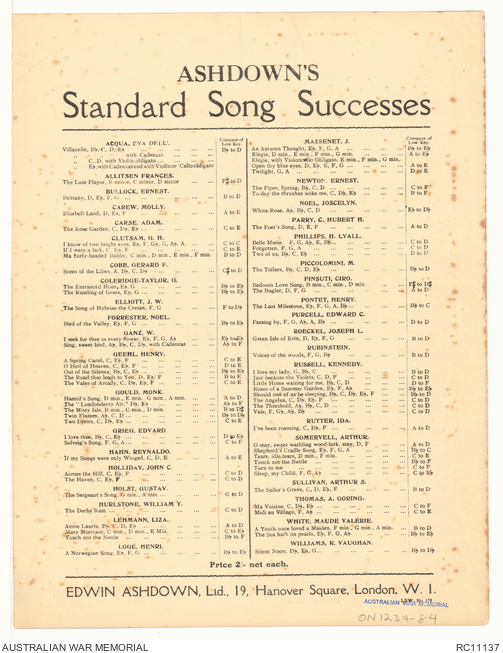 Sheet music for the duet titled 'The Battle Eve' composed by Theo Bonheur with lyrics written by G W Southey. The song has been written for performances by bass and tenor voices. The front cover of this copy of the sheet music for this song shows that it was published by the British publishing firm, Edwin Ashwon Limited, London, and was sold for 2/-. The back cover of this copy features a list of songs that were available for purchase and regarded as Ashdown's successful standards. These include titles by composers such as Arthur Sullivan and Gustav Holst.

The piece appears to have been composed in the early 1890s with the first recorded performance at the Athenaeum in Melbourne in May 1893.

Gautier Leonard Southey was a French composer and appears to have been the writer of the lyrics for this song. He composed a piano piece titled 'Le Secret' as well as waltzes like 'The Fairy Wand Waltz' which was written during 1893.

The song titled ‘The Battle Eve’ was very popular during the First World War period with many performances at many concerts related to the war effort in Australia. This included patriotic concerts held across Australia during 1914. The first of these was a patriotic concert held at the School of Arts, South Grafton, New South Wales, on Tuesday 1 September 1914. Miss Eva Beatson performed the song with proceeds from the evening totalling 52 pounds. Another patriotic concert was held at the Shire Hall in Mildura, Victoria on Tuesday 1 September 1914 where the song was performed as a duet by Mr W G Pardy and Mr Colin Campbell. Their rendition received a call for an encore, so the last two verses were repeated again. Another was held at the Albany Town Hall, Western Australia on Wednesday 2 September 1914 to raise money for the fund providing comforts to the troops. The song was again performed as a duet , with the performers identified as Mr F Thomas and Mr A Young. ‘The Battle Eve’ was also performed as a duet by the singers identified only as Whitehead and McCullagh, at a patriotic concert at Mackay, Queensland, on Thursday, 10 September 1914. The Mackay newspaper, The Daily Mercury, gave the following report of the programme: ‘In the midst of bloody battles music has frequently revived drooping courage, strengthened faint and weary hearts, awakened hopes, and turned the scale of battle. It is fitting that music, which is such an aid to military success, should also be enlisted in the praiseworthy effort of swelling the active service funds…Patriotic music always stirs the blood and quickens the pulse…and the sentiments expressed in the various songs seemed to accord well with the feelings of those present, who received the contributions with warm-hearted applause’.

Concerts to raise money for the patriotic fund continued throughout 1914 and into later years of the First World War. Hugh McMahon performed this song as a duet to raise money for the patriotic fund with Mr C B Rushton at the Princess Hall in Claremont, Western Australia on Tuesday 22 September 1914. McMahon was the bandmaster of the Perth City Band and was dubbed the ‘Emperor of the Cornet’. He received an encore for his solo cornet solo of the song titled ‘Mother Machree’ during this same concert. One of the final events held to raise money for the Patriotic Fund during 1914 occurred at Yuluma, New South Wales in early October where the song was performed by Mr Gall and Mr Pooley. Another concert, organised to raise money for the Patriotic Fund, was organised at the YMCA Hall, Blackboy, Western Austraila on Tuesday 13 February 1917 with all of the performers being men who had enlisted for active service and included Private Bennett, Private Permain, Sergeant John, Gunner Leslie, Private East, Corporal Ford, Sergeant Mowday and Private Grieve. Private Grieve and Private Bennett performed 'The Battle Eve' as a duet during the evening.

This song was also popular at fundraising events for the war effort, particularly between 1915 and 1917. One of these events was held at Rokewood Mechanics' Hall on Friday 28 May 1915 to raise money for the Belgian Relief Fund where 'The Battle Eve' was performed as a duet by Reverend M McQueen and Mr F Johns. A total of 20 pounds was collected as a result of the evening which also included an auction. A total of 23 pounds were also raised during a concert to raise money for the Broadwater branch of the Red Cross Society in New South Wales. The vocal duet 'The Battle Eve' was performed during this concert by Mr Blair and Mr Murray on Wednesday 9 March 1916. The employees of the Myer department store at Bendigo, Victoria, established a Red Cross Branch. Working bees, reported to have been attended by 85 people, were held on Monday nights to produce comforts for the soldiers. To provide funds for the materials required to continue these endeavours, a concert was held at the Masonic Hall, Bendigo, on Wednesday 17 May 1916. During the evening, Mr E H Gollett and Mr J Brown performed the duet 'The Battle Eve'. Norman Myer, the nephew of Sidney Myer who was the Director of the Myer Emporium at the time, enlisted in the Australian Imperial Force and served during the First World War with the Divisional Ammunition Column.

This song was also popular at events held to farewell those who had enlisted to serve with the Australian Imperial Force (AIF). Captain Archie McLaurin was the officer in charge of the Rutherglen Troop of the Australian Light Horse at the time of the outbreak of the First World War and was one of the first to enlist in the AIF. His application to go with the first contingent was rejected but he was one of the officers who prepared the second contingent for sailing at the Broadmeadows camp in Victoria. McLaurin was from Rutherglen and a farewell gathering was held in the Rutherglen Town Hall on Friday 11 December 1914. Mr Cahir and Mr Withers performed the duet ‘The Battle Eve’ during the musical programme presented at the event. Mr Ross Thomas and Mr R Scott performed the duet ‘The Battle Eve’ at a public event to farewell men from Bathurst who were going to the Front on the evening of Tuesday 11 May 1915. This song was also performed during the farewell for Chaplain James Crookston, who was the Reverend at St Andrew's Church in Bendigo, Victoria. The song was performed by Mr Griffiths and Mr McWhirter. Crookston embarked at Sydney aboard SS Makarini on 5 April 1916, and was posted to serve with the 2nd Australian Division as the Senior Chaplain for the Presbyterian denomination.

Similarly, the song was also popular at welcome home events for returned service personnel. One of these was the welcome home event organised for Private Arthur George 'Artie' Jack, who served with the 22nd Battalion. A reception was given for Jack at the Lake Moodemere State School, Victoria, on Friday 19 April 1918 with reports stating that it was 'one of the happiest and most enthusiastic ever held at Lake Moodemere.' During the evening, 'The Battle Eve' was performed as a duet by Mr Withers and Mr Sullivan.

This was also a very popular song with Australian troops on active service with many performances of this song given on troopships by soldiers on their way to the front and returning home after the war. Jack Vincent and Reginald Arthur Lewin performed this song while travelling to the front at a concert held aboard HMAT Shropshire, on 3 April 1915. Mr A V Soul and Private James Patrick Carroll sand this song as a duet aboard HMAT Wiltshire at an afternoon concert on 14 February 1918. Patrick Joseph Walton and James Rice performed this song at a concert aboard HMAT Argyllshire on 12 August 1919, while they were returning to Australia.

The song was also very popular with concert parties organised by Australian servicemen during the war. The Cooee's Concert Party, performed a series of concert parties in France during Ocotber 1918. This song was performed by Private George Alexander Stevenson and Private Charles Stanley Trewavis during one of these concerts held on the afternoon of 24 October 1918. George Everest Kendrickis another who is believed to have performed this concert together with Ben Hall during a concert by the Australian Flying Corps Concert Party at Minchinhampton Aerodrome, England, on Saturday 22 March 1919. It was also popular with British service personnel and featured in a concert held at Tidworth by the Southern Command Depot Concert Party, 'The Merrions', to raise money for the widow of Lieutenant F A Richardson, DCM, who served with the East Yorkshire Regiment. The concert was held on Sunday 19 May 1918 with this song performed by Corporal Roberts and Private Dams.