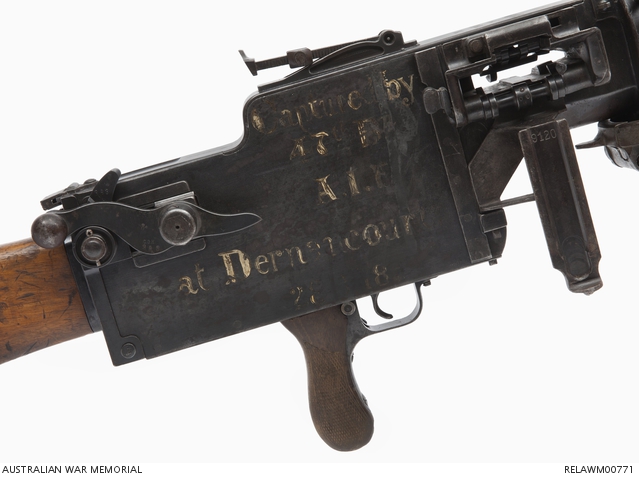 The MG 08/15 Maxim machine gun is a short recoil operated, water cooled, fully automatic, belt-fed weapon. The operating system uses a two-part toggle lock connected by a hinge which is located between the breech block and a barrel extension. The entire barrel extension and breech block recoil inside the receiver against the tension of a spring located under the separate cover outside of the left receiver wall. The cocking handle is located on the rear axis of the toggle lock and serves as both an unlocking member and a breech block accelerator. The feed system use non-disintegrating belts made from cloth or tarpaulin with metallic alignment struts. Ammunition feed is from the right side. The MG08/15 is supported by a bipod. The top breech cover is stamped with the serial number, M.G.08/15 GWF SPANDAU 1917. In yellow paint on the right side is 'Captured by 47 BN A.I.F. at Dernancourt 28.3.18.' The breech block is stamped 4306, butt 4898, feed mechanism 4005 and ammunition box bracket 9120. This weapon is complete with all parts including a bipod and top water jacket condenser hose clip.

This machine gun was captured by Sgt Stanley Robert McDougall after a German attack on the 47th Battalion AIF, at Dernancourt on the 28th March 1918. For this action, Sgt McDougall was awarded the Victoria Cross.