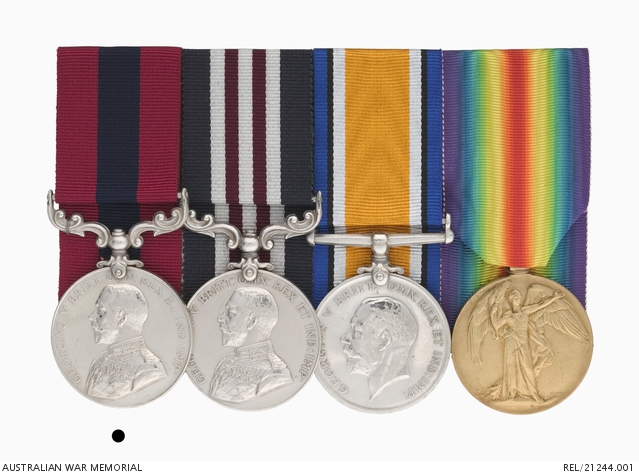 Earl Richardson, a native of St George, Queensland, enlisted in the AIF in November 1915, aged 32. He received the service number 21098, and became a gunner with the 35th Battery of 9 Field Artillery Brigade, sailing from Sydney aboard the transport A8 ‘Argyllshire’ in May 1916. Richardson later transferred to the 45th Battery, part of 12 Field Artillery Brigade, with whom he served for the remainder of the war. By 1918, he had reached the rank of sergeant, and was recommended for the award of the Meritorious Service Medal. Instead, he received the Military Medal for his gallantry during the major German attacks of March-April, and the Allied offensive in August. Later in the same year, he was awarded the Distinguished Conduct Medal for his leadership and courage in resisting a German counter-attack. Earl Richardson returned to Australia in mid-1919, where he married and resumed sheep farming in the St George area. The recommendation for the DCM reads as follows: 'On the morning of the 17th October 1918, during the attack on the River SELLE the 45th Battery came into action near ST. SOUPLET. Throughout the day they constantly and accurately shelled. During the afternoon the enemy was observed to be forming up for counter attack. The 45th Battery immediately opened fire and were then themselves subjected to a concentrated shelling. Casualties occurred in every gun crew; Sergeant RICHARDSON took charge of the situation and, realising that a rapid rate of fire should be maintained, rearranged gun crews and by his personal gallantry and energy managed to maintain four guns in action. Again on the morning of the 18th inst. when the 45th Battery was firing in support of an attack by the 30th American Division, Sgt. RICHARDSON's services, under heavy fire where casualties kept occurring, were invaluable. After giving assistance to other gun crews he himself with one gunner kept his gun in action until the end of the operation. His splendid courage and untiring sense of duty enabled the maximum of fire to be obtained under most adverse circumstances.' A note on the original recommendation reads as follows: 'Recommended for Meritorious Service Medal in connection with 1919 New Year's Gazette.' This apparently refers to the September 1918 MSM recommendation which was upgraded to an MM.