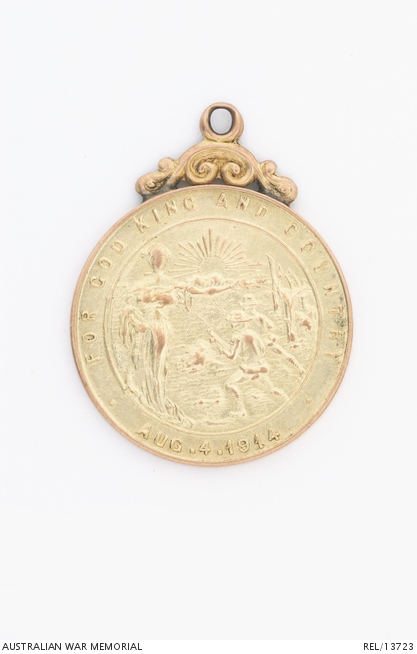 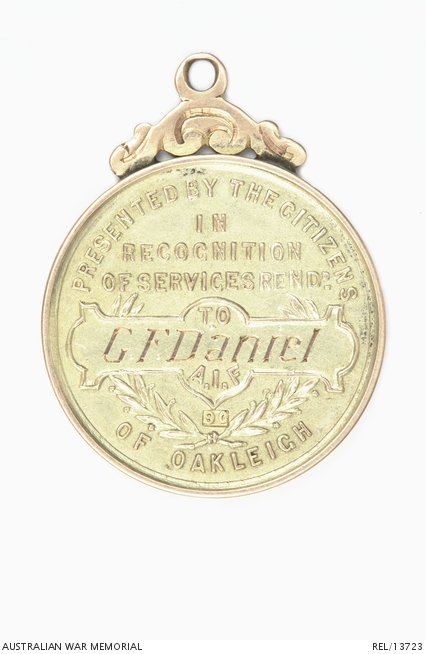 9 carat gold watch fob presented to Lance Corporal G.F Daniel on his return to Australia from the First World War.
Obverse features a central design of two diggers charging across a plain, Nike (Greek goddess of victory) holding a laurel wreath, the rising sun in the background. Surrounding this design are the words "FOR GOD, KING AND COUNTRY . AUG . 4 . 1914".
Reverse is engraved with the inscription 'PRESENTED BY THE CITIZENS 0F OAKLEIGH IN RECOGNITION OF SERVICES RENDd'. Underneath is a panel, with "G.F. Daniel" engraved between the words TO and A.I.F.

Born in Ballarat, western Victoria on 16 December 1870, Giles Felix Daniel moved to Oakleigh, Victoria aged 15. A member of the Victorian permanent forces, he served as a corporal (regimental number 8) with the First Victorian Mounted Infantry Company, part of the first Victorian Contingent to the war in South Africa in 1899. This unit was one of the first Australian formations to see action during the Boer War. It was largely drawn from serving members of the Victorian forces who initially formed part of the First Australian Regiment, and later the Second Victorian Mounted Rifles. Demoted to private following a Court Martial on 19 November 1900, Daniel returned to Australia in December of the same year. During the First World War, he was again one of the first to enlist, joining the AIF on 19 August 1914, and becoming Lance Corporal number 32 with the First Divisional Signals Company. He served with this unit during the Gallipoli campaign and until his return to Australia on 11 April 1916. Aged 76 when he died on 10 April 1946, Giles Daniel is buried at Springvale Cemetery, Victoria.