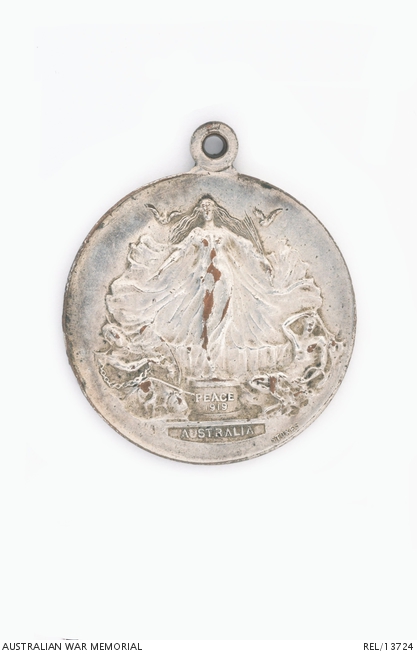 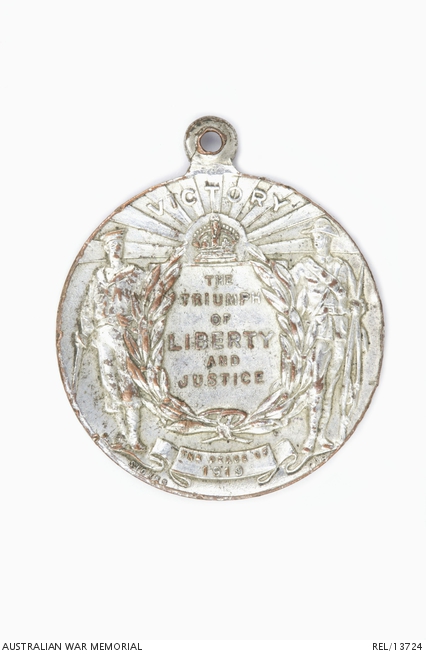 Circular medalet with a plain edge and integral suspension loop. The obverse features a symbolic female figure of Peace, holding a sword and standing on a plinth marked 'PEACE 1919'. Behind her flies a dove, and at her left and right feet are two figures freed from their shackles. The reverse features a central panel surrounded by laurel leaves, surmounted by the King's Crown with the word 'VICTORY' over the rays of the rising sun. A sailor and a digger stand at ease on either side of the panel on which is cast 'THE / TRIUMPH / OF / LIBERTY / AND / JUSTICE'. Below the leaves is a very small panel with the words 'THE PEACE OF 1919' and the manufacturer's name.

Designed by C Douglas Richardson, 'The Peace of 1919' medalet was issued by the Defence Department to school children throughout Australia to commemorate the signing of the Versailles Peace Treaty in 1919. The medals were originally suspended from a narrow piece of red, white and blue striped cotton ribbon. This medalet is associated with one of the children of Lance Corporal Giles Daniel, 1st AIF. Born in Ballarat, western Victoria on 16 December 1870, Giles Felix Daniel moved to Oakleigh, Victoria aged 15. A member of the Victorian permanent forces, he served as a corporal (regimental number 8) with the First Victorian Mounted Infantry Company, part of the first Victorian Contingent to the war in South Africa in 1899. This unit was one of the first Australian formations to see action during the Boer War. It was largely drawn from serving members of the Victorian forces. Demoted to private following a Court Martial on 19 November 1900, Daniel returned to Australia in December of the same year. During the First World War, he was again one of the first to enlist, joining the AIF on 19 August 1914, and becoming Lance Corporal number 32 with the First Divisional Signals Company. He served with this unit during the Gallipoli campaign and until his return to Australia on 11 April 1916.