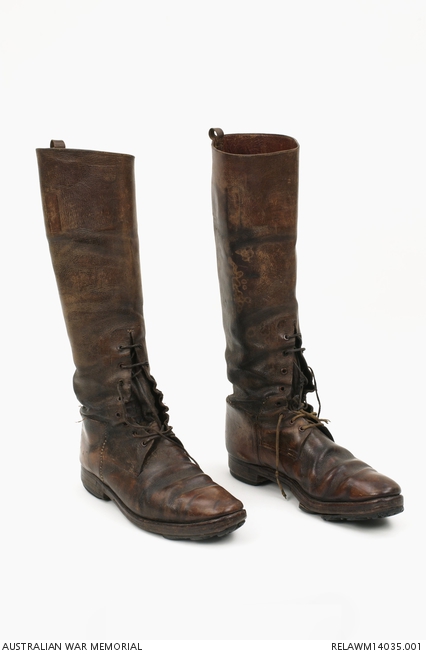 Pair of private purchase brown leather knee or field boots with leather soles. The top of each boot is fitted with an external leather loop and two white internal cloth loops for pulling the boot on. There are nine pairs of metal lace eyelets and the soles have been fitted with rubber cleats bearing the legend: 'Phillips Military Sole, Size A Special Quality Stout RD no 644802 and 646025' and 'Phillips Military Heel 3 Stout Special Quality Patent RD no 645522'. These have been nailed to the soles. Both boots have been equipped with leather laces, while those on the proper left boot have been repaired with part of a string lace.

Knee boots worn by Brigadier General CBB White during the First World War, possibly in the field. White was born at St Arnaud, Victoria, in 1876, but spent his early life in Queensland. He joined the Militia in 1896 and in 1899 successfully sat an examination to join the permanent forces, becoming a Lieutenant in the Queensland Regiment of Royal Australian Artillery. He served with the 1st Commonwealth Horse during the Boer War, and after his return to Australia received his first staff appointment, as temporary captain and aide-de-camp to Major General Hutton, commander of the Australian Military Forces. Nominated by Hutton, he attended the British Army Staff College, Camberley, in 1906, and graduated with good results. After several years in England, attached to the British War Office, Brudenell White was recalled to Australia as a major, to become director of military operations at Army Headquarters. At the outbreak of war in 1914 he was selected by Major General Bridges to be chief of staff for the new Australian Imperial Force, and took part in the landing at Gallipoli in April 1915. After the death of Bridges in May, he became chief of staff to the new commander, Lieutenant General Birdwood. Promoted brigadier general in October, White was largely responsible for planning the successful evacuation of Anzac in December. Serving on the Western Front for the remainder of the war, he exerted great influence in his role as staff officer to Birdwood. He was suggested as a suitable leader for the Australian Corps when it was formed in 1918, but remained with Birdwood, becoming senior staff officer to the 5th Army. Disappointed with cuts made to the Australian military after the war, he retired as Chief of the General Staff in 1923, to take up civil appointments. In March 1940, after the outbreak of the Second World War, Brudenell White was recalled as CGS, but was killed in an air crash near Canberra on 13 August.