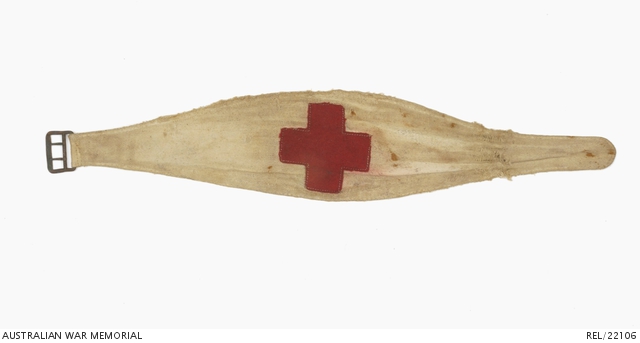 White cotton armband with a wool flannel red cross sewn in the centre. The armband tapers from a wide centre to the ends. One end has a metal buckle with two claws. The name 'MAJOR HAZELTON A.R.' is written in blue ink on the back.

Worn by NX35134 Major Alan Richard Hazelton of C Company, 2/10 Field Ambulance, Australian Army Medical Corps. Hazelton was born in Sydney in November 1915 and enlisted in the Medical Corps on 25 July 1940. He was taken prisoner of war in Singapore in February 1942 and was held in camps along the Burma-Thai railway where he was the Senior Medical Officer for 'D Force' and at Nakom Pathom Base Camp in Thailand. He returned to Australia after the war.