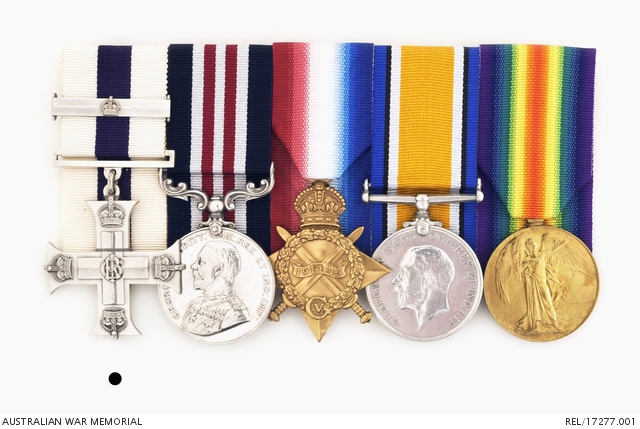 He was awarded the Military Medal as a sergeant for his bravery near Bois Grenier, France on 2 June 1916. The recommendation for the award reads: 'A proficient N.C.O. who displayed great coolness when under fire. Recently when front and support lines were under heavy enemy fire he voluntarily went forward to gather information as to the situation (2/6/16)...'

Hammond was wounded in the leg at Pozieres on 29 July, leaving him with an enduring limp, the same day that he was commissioned a second lieutenant. He incurred a second more serious wound on 5 November at Flers when his elbow was shattered, rendering his left arm permanently useless, which had to be supported in a sling. In January 1917 he was promoted to lieutenant.

For his actions as an Intelligence Officer near Westhoek on 20 September 1917 he was awarded the Military Cross (MC). Despite having only one functioning arm and the added handicap of a walking stick, he managed to single-handedly capture 20 German prisoners and gather important information. The recommendation for the MC reads: 'For conspicuous bravery and devotion to duty in the attack on 20/9/17 at WESTHOEK. Lieut. HAMMOND went forward with the Advance Brigade party as Intelligence Officer. He secured much valuable matter. Although only having the use of one arm, he captured 20 prisoners by himself. His example to the men was wonderful. He was fearless in the extreme, and cheered everyone on. He volunteered for any dangerous work and made a number of reconnaisances of the front line, securing much useful information'.

The recommendation for the bar reads: 'For consistent gallantry and excellent work during the operations South of MORLANCOURT near ALBERT, on night 10/11th June 1918. Just prior to the attack he moved about among his men, and by his cheerful manner inspired confidence. When the barrage opened, he jumped out of the trench, formed his men up, and cleverly led them across NO MANS LAND to the objective. Being the first to jump into the enemy trench, he pointed his revolver at the Germans there, with the result that 20 surrendered to him. He quickly consolidated his line, and personally put out covering parties, setting a fine example of coolness and courage to all. He was subsequently wounded when returning from a visit to one of his out-posts, and has since died.'