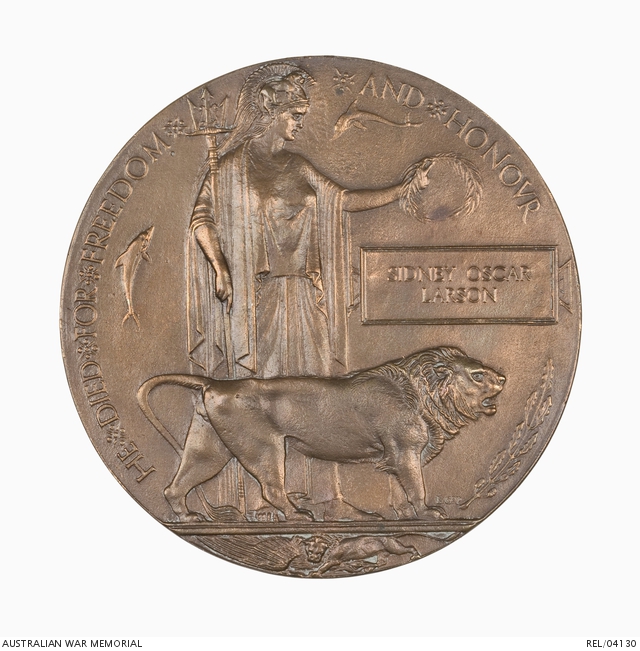 Bronze next of kin plaque, showing on the obverse, Britannia holding a laurel wreath, the British lion, dolphins, a spray of oak leaves and the words 'HE DIED FOR FREEDOM AND HONOUR' around the edge. Beneath the main figures, the British lion defeats the German eagle. The initials 'ECP', for the designer Edward Carter Preston appear above the lion's right forepaw. A raised rectangle above the lion's head bears the name 'SIDNEY OSCAR LARSON' .

Sidney Oscar Larson was born at Dulwich Hill, NSW in 1893. He was working as an orchardist when he enlisted in the AIF at Yanco, NSW on 31 July 1916, aged 22. Larson was allocated the service number 6789 and after undergoing initial training at the Cootamundra and Liverpool Camps, embarked from Sydney on 17 November as a private with the 22nd Reinforcements to the 8th Infantry Battalion, aboard SS Napier.
Larson arrived at Devonport, England on 29 January 1917 and undertook further training in England before moving to Etaples in France in April before joining his battalion on 10 May.

Early in the morning of 4 October 1917, the battalion waited in front line trenches and old shell holes for the signal to advance in an attack on Broodseinde Ridge in Belgium, planned to begin at 6 am. It was raining and many of the men sheltering in the shell holes lay with their waterproof capes drawn over their heads. At 5.27 am the Germans, who had received intelligence of the impending attack, launched an artillery and mortar barrage on the waiting troops. A seventh of the men became casualties before 6 am when the tremendous British opening barrage finally began at the planned time. About 200 officers and men from the 8th Battalion were killed or wounded. Larson was among those killed. Witnesses later said he had been blown to pieces as he waited in a shell hole for the order to attack.

Larson was buried south east of Zonnebeke. However, his remains could not be located after the war for reburial in a military cemetery so his name was recorded on the Menin Gate Memorial at Ypres.

Larson's brother, Eric William Larson, who served with 13th Battalion, had earlier died of wounds received at Flers on 9 February 1917. This commemorative plaque was sent to Larson's father, John, in 1922.