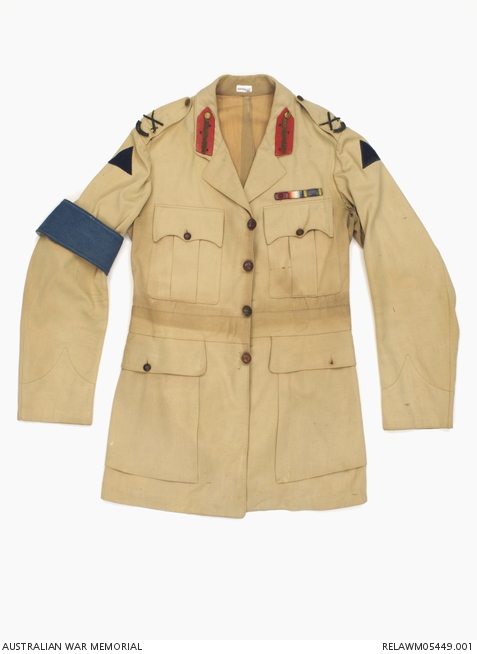 Custom made, officer's private purchase lightweight wool twill service dress tunic with oxidised brass general officer's sword and baton rank insignia on the shoulder straps. The tunic has a pair of box pleated patch pockets on the breast with triple pointed flaps and a large expanding pocket over each hip with a rectangular flap. The sleeves have pointed cuffs. There are scarlet general officer's gold bullion embroidered gorget patches secured with gilded brass general officer's buttons on each side of the collar. Above the left breast pocket is a ribbon bar for the Distinguished Service Order with a rosette device indicating a bar to the award, 1914-15 Star, and Order of the Nile 3rd class. The brown leather buttons have an impressed finish to imitate plaited leather. The third button on the front has been replaced with an oxidised brass general service button. Both sleeve bear the triangular blue colour patch of 4 Light Horse Brigade on the upper shoulder, while the right sleeve bears a plain blue wool twill armband, lined with khaki cotton drill, for a brigade commander. The jacket is unlined except for linen interlining behind the front buttons and corresponding buttonholes.

This jacket was worn by Brigadier General William Grant, AIF during his service in Palestine with the light horse. Born in 1870, Grant was commissioned in the Queensland Mounted Infantry in 1901 but did not serve in the Boer War. By 1911 he had reached the rank of lieutenant colonel and was in command of 14 Light Horse Regiment (Queensland Mounted Infantry). In March 1915 he was appointed to command 11 Light Horse Regiment with the AIF but the unit was disbanded in Egypt in August and Grant transferred to 9 Light Horse Regiment on Gallipoli. He took over command of this regiment when its commanding officer was killed at Hill 60. When the AIF was reorganised in 1916 the 11th Regiment was reformed, again with Grant in command. He fought in the Sinai campaign and was awarded the Distinguished Service Order (DSO) in December 1916. Grant was promoted to Brigadier General after the Second Battle of Gaza in 1917 and given command of 4 Light Horse Brigade in September 1917. On 31 October 1917 he led his brigade in the attack on Beersheba in an successful effort to break the Turkish defences and seize the wells in the town. Although given the order to do so by General Chauvel, the decision to use the brigade in a mounted cavalry style charge was Grant's alone. He received an immediate award of a bar to his DSO for 'dash and determination' the following morning, which was personally presented by General Allenby. Grant had also been made a Companion of the Order of St Michael and St George in 1917, appointed to the Order of the Nile 3rd class in 1918, and made a Companion of the Order of the Bath for skill in command of the brigade in 1918, especially at Semakh. He was also mentioned in despatches four time. Grant remained active in the militia after the war and retired in 1928. He died in 1939.