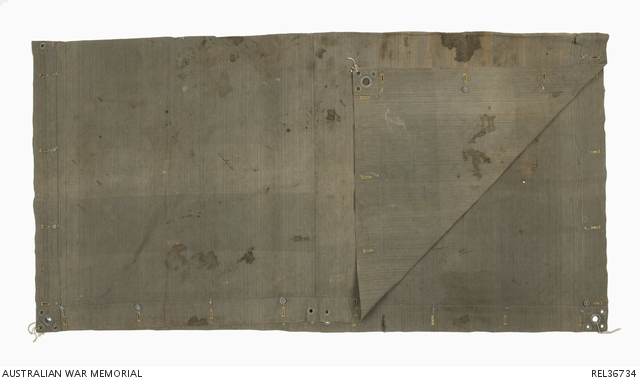 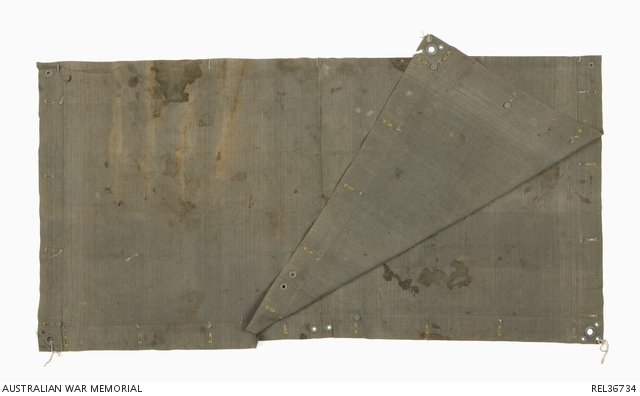 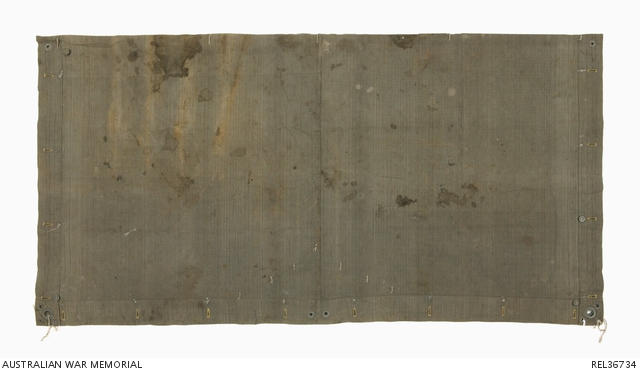 German Model 1911 field grey zeltbahn, approximately square in shape, fitted with a series of eight buttonholes reinforced with yellow thread and eight grey painted dropped-centre steel buttons down each perimeter, and on both sides. Each corner is also fitted with one large and three small grey painted steel eyes. There is a line of five cotton loops attached across the centre of the zeltbahn and a half-circle of seven loops adjacent to one edge. A maker's stamp appears at one edge, but only the date is legible. A number of the buttons are missing, and the zeltbahn appears to have been pierced by either shrapnel or a bullet, resulting in a series or tears and dried bloodstains. These line up when the zeltbahn is correctly folded in the position in which it would have been carried on the soldier's body. There are a series of five or six rust stains across the upper centre which would correspond to the stored tent poles and pegs, now missing.

Captured German zeltbahn or combination ground sheet/tent half. The zeltbahn was a standard piece of German equipment developed in 1892 and updated in a field grey colour in 1911; two or four sheets could be buttoned together to form a tent. It could alternatively be used as a rain cape by passing a cord through the semi-circle of loops to form a neck, while a belt could be passed through the central loops. This 1916 dated example bears evidence of the original wearer suffering a bullet or shrapnel wound, and is related to the service of Lieutenant Roy Daylesford Gelling, 1 Light Horse Regiment and 6 Field Artillery Brigade. A grazier of Liverpool, NSW, born 26 August 1890, Gelling enlisted on 28 May 1915 and was almost immediately selected to attend Officer’s Training School at Liverpool, where he graduated as a Second Lieutenant in November 1915. He embarked from Sydney aboard the RMS Osterley on 15 January 1916 and was taken on strength of 1 Light Horse Regiment at Heliopolis on 1 March 1916; transferred to 2 Divisional Artillery Column ten days later and sailed for France at the end of March. Gelling was transferred to 6 Field Artillery Brigade (6 FAB) on 18 July 1916 and remained with this unit for the remainder of his service. Promoted to Lieutenant on 14 October; and suffered a middle ear infection at the start of January 1917 which necessitated his evacuation to England and ten weeks treatment – he returned to France in late March. While on temporary transfer to 5 FAB in June 1917, Gelling contracted pleurisy which affected his health to the degree where he was struck off strength of his unit and was returned to Australia aboard the Osterley on 8 December. His appointment terminated due to medical grounds on 13 March 1918.