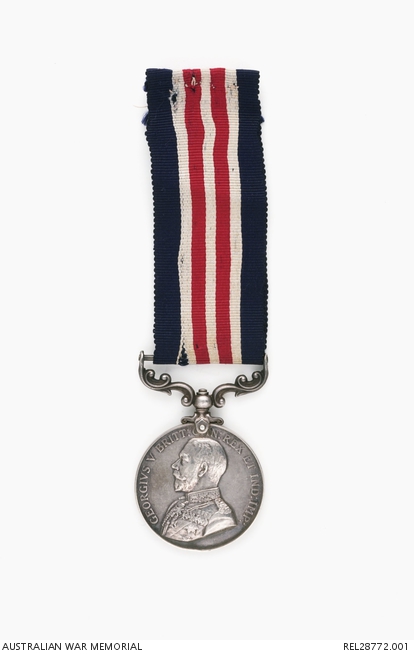 2106 Driver Farquhar Henry Suthern served with 113 Howitzer Battery, 13 Australian Field Artillery Brigade. Suthern was a 25 year old labourer from Berridale, NSW, when he enlisted on 5 September 1915. He served first with the 14th Reinforcements to 6 Light Horse Regiment, sailing for Egypt with this unit aboard the transport HMAT A62 'Wandilla' on 3 February 1916, before transferring to the artillery later in 1916. The recommendation for the award of his Military Medal reads, 'On the morning of 29th October, 1917, east WESTHOEK, drivers of the 113th Battery were engaged in packing ammunition to gun-pits. The party came under very heavy enemy fire on the corduroy road and other ammunition carrying parties turned back. No. 2106, Driver Farquhar Henry SUTHERN, together with two of his comrades, realising the importance of their task, proceeded to carry up their ammunition through the barrage. The action of these men inspired the remainder of the party to follow, with the result that the ammunition which was much required at the battery was duly delivered. This man has always set a high example to his comrades and his conduct on this occasion is deserving of special recognition.' Suthern visited Irish relatives after the war, and married there, before returning to Australia after June 1919.