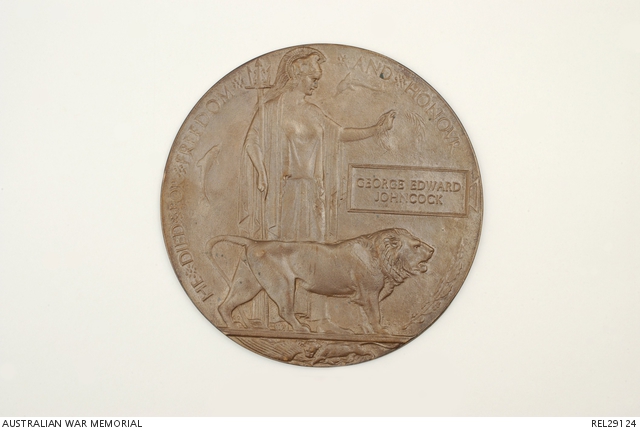 Bronze next of kin plaque, showing on the obverse, Britannia holding a laurel wreath, the British lion, dolphins, a spray of oak leaves and the words 'HE DIED FOR FREEDOM AND HONOUR' around the edge. Beneath the main figures, the British lion defeats the German eagle. The initials 'ECP', for the designer Edward Carter Preston appear above the lion's right forepaw. A raised rectangle above the lion's head bears the name 'GEORGE EDWARD JOHNCOCK'.

Born in Greenwich, London, England in 1893 George Edward Johncock enlisted in the AIF from Bangalow, New South Wales, where he was employed as a farm hand, on 14 September 1915. After training in Queensland he was posted a private, service number 4327, to the 13th Reinforcments to the 9th Battalion. He left Brisbane for overseas service on 3 January 1916, aboard HMAT A55 Kyarra.

In Egypt in March 1916 Johncock transferred to the 47th Battalion. The unit left for France in June and took part in its first major battle at Pozieres in August, during which Johncock was treated for shell shock. He was promoted lance corporal in February 1917, Corporal in July and sergeant in November. Johncock received a bullet wound to the hand on 5 April 1918 at Dernancourt, during an action for which he was awarded the Military Medal 'for conspicuous bravery and devotion to duty'. He was evacuated to England for treatment and did not return to France until June, when he joined the 49th Battalion. He was killed near Bray on 13 August 1918 and is buried at Cote 80 French National Cemetery at Etinehem.

This commemorative plaque was sent to his father, Edward, in London in November 1922.