A unique panoramic view of the old walled city of Jerusalem, taken from the Mount of Olives in ... 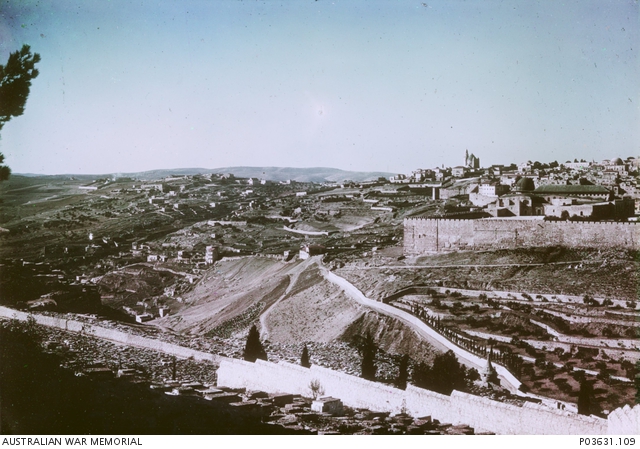 A unique panoramic view of the old walled city of Jerusalem, taken from the Mount of Olives in early 1918. The capture of Jerusalem by the British Army on 9 December 1917 ended the 400-year rule of the Ottoman Turks and was greeted with tremendous excitement by Christians and Jews alike. The Arabs of the city probably viewed the arrival of the British in as much the same way as the occupation by the Turks. General Allenby, the British commander-in-chief, formally entered the city on 11 December 1917. He approached the city from the west, passing small detachments, representing all the troops under his command, drawn up along the Jaffa road, and entered the city on foot through the Jaffa Gate. Captain Hugo Throssell, VC, led the Australian detachment. This digital print combines three individual Paget plates. Hurley did not allow sufficient overlap between the centre and right-hand plates, and so a sliver from another similar image, P03631.103, taken on the same day, has been digitally inserted between the two plates. This image is only available as a digital print. This is the left hand image in a three part panorama. See P03631.166 for the combined image. This image is a colour Paget Plate. The same image is available in black and white and is held at B01718A. The combined image is also available in black and white and is held at B01718P.