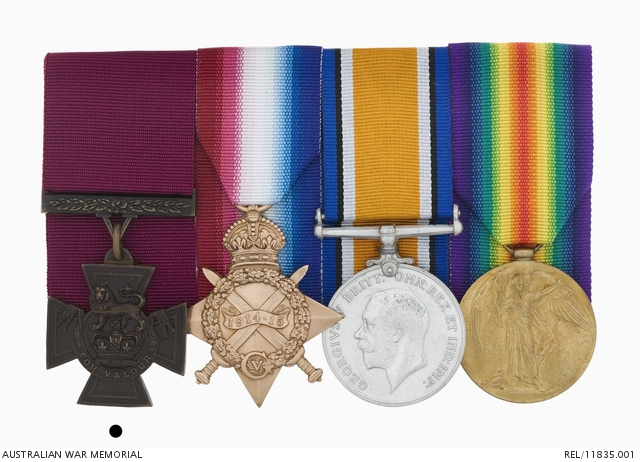 Victoria Cross. Engraved on reverse suspender with recipient's details and on reverse cross with date of award.

Hugo Vivian Hope ‘Jim’ Throssell was born on 26 October 1884 at Northam, Western Australia. Following his schooling he worked on cattle stations until, in 1912, he and his brother Frank Eric ‘Ric’ Throssell took up a 1000-acre wheat property at Cowcowing, north east of Northam. In September 1914, following the outbreak of the First World War, both brothers enlisted and joined the 10th Light Horse Regiment (10LHR). Hugo was made second lieutenant and embarked on HMAT Itonus on 19 February 1915.
Hugo and a detachment of men remained in Egypt during 10LHR’s initial deployment to Gallipoli in May. He finally arrived on the peninsula on 4 August, in time for the disastrous charge at ‘the Nek’, on the 7th. Later that month, 10LHR took part in an assault on Hill 60. The initial surprise attack at around 1 am on 29 August overwhelmed the Turkish trench but counter-attacks soon followed. Before long the Turks began to bomb Throssell’s position. As the counter-attacks intensified the losses of the regiment mounted. Throssell said later that their position was ‘hopelessly outnumbered’ against an enemy that seemed to be unlimited, though he kept encouraging his men to greater efforts. Just after dawn, the Turks launched a final unsuccessful attack before retiring.
When the fighting was over, the extent of Throssell’s wounds became apparent. When he accepted a cigarette, it was noted that ‘the wounds on his shoulders and arms had stiffened, and his hand could not reach his mouth. He wore no jacket, but had badges on the shoulder straps of his shirt. The shirt was full of holes from pieces of bomb, and one of the ‘Australia’s was twisted and broken, and had been driven into his shoulder.’
For his actions during the fighting, Throssell was awarded the Victoria Cross, the only such award to a member of the Light Horse. The recommendation for the award reads: ‘For most conspicuous gallantry and devotion to duty. Although wounded in several places he refused to leave the trench, or obtain assistance, until all danger had passed, when he went and had his wounds dressed, and returned to the firing line until ordered out of action by the Medical Officer. By his personal example he kept up the spirit of his party, which was largely instrumental in saving the situation at a critical period.’
Throssell was evacuated to England for treatment. While convalescing he met the emerging author and columnist Katharine Susannah Prichard, a devout socialist whom he later married. In April 1916, he was invalided back to Australia where he campaigned vigorously for the war effort. In November he returned to active service and re-joined his regiment in the Middle East.
On 19 April 1917 he took part in the Second Battle of Gaza. During the battle he was seriously wounded and his brother Ric was killed. Though Throssell’s wounds healed, the loss of Ric was a shattering blow from which he never fully recovered.
Throssell was promoted to captain on 15 August. After the fall of Jerusalem, he led the ceremonial guard at Jaffa Gate, through which General Edmund Allenby, the British Commander of the Egyptian Expeditionary Force, made his formal entry on 11 December.
Throssell’s health deteriorated. He was in and out of hospital over the following months, and finally returned to Australia on 4 September 1918 and discharged from the AIF. He returned to civilian life in Western Australia and was appointed to the Soldier Settlers’ Board. He later resigned to work a mixed farm at Greenmount with Katherine. The enterprise struggled and the family became mired in debt. Throssell’s wartime experiences continued to haunt him, and he fell into increasing bouts of depression. He attempted to pawn his Victoria Cross, but was offered only a few shillings.
Shortly afterwards he ended his life using his service revolver. His suicide note read: ‘I can’t sleep. I feel my old war head. It’s going phut, and that’s no good for anyone concerned.’ He was survived by Katherine and a son, Ric.