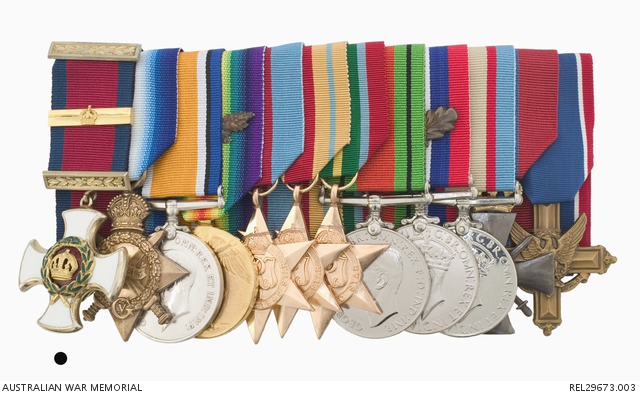 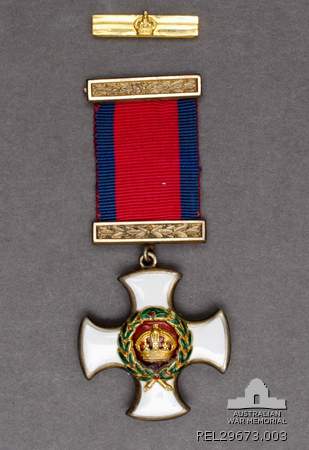 During the First World War George Alan Vasey served with 4 and 22 Field Artillery Brigades, and with 11 Infantry Brigade. Major Vasey was awarded the Distingiushed Service Order in June 1918 for 'conspicuous service' while on the staff this Brigade. In the Second World War, he was posted to 6 Division in the Middle East. In 1941 commanded 19 Infantry Brigade which he led in Greece and Crete, also taking overall command of Australian forces involved in the defence of Crete. After returning to Australia Vasey was promoted major general and gained command of 6 Division, fighting the Japanese in Papua. He was transferred to lead the 7th Division through the fighting at Gona, Sanananda, Nadzab, Lae and the Ramu Valley. In mid 1944 he was evacuated sick. In 1945 he was appointed to command 6 Division, but died in an aircraft crash off Cairns on 5 March. The Bar to his DSO was awarded in 1941. The citation reads 'VX.9 Brig. VASEY George Alan C.B.E. D.S.O. Commanding Aust. Inf. Bde., having already been continuously engaged in the campaign in Greece from Veve to Thermopylae, arrived in Crete with his Brigade on April 26th, took command of the whole of the Australian troops in Crete totalling over 7000 men including some of every unit of 6th Aust. Div. as well as a number of units of 1 Aust. Corps. With few facilities and little more than a Brigade Staff, Brig. Vasey took this force, in hand, sorted it out and organised it, had it fed, clothed and equipped, and placed without delay in tactical positions for the defence of the island. From May 20th till the evacuation on May 29th, Brig. Vasey personally superintended the fighting of the Australians at Georgiopolis and Canea. In the face of daily air bombing and heavy machine-gun fire, he skilfully manoeuvred his troops to meet the changing situation, and in co-operation with Commander N.Z. Brigade, was instrumental in holding together a cohesive force, thus driving back the Germans and ensuring an orderly evacuation.'