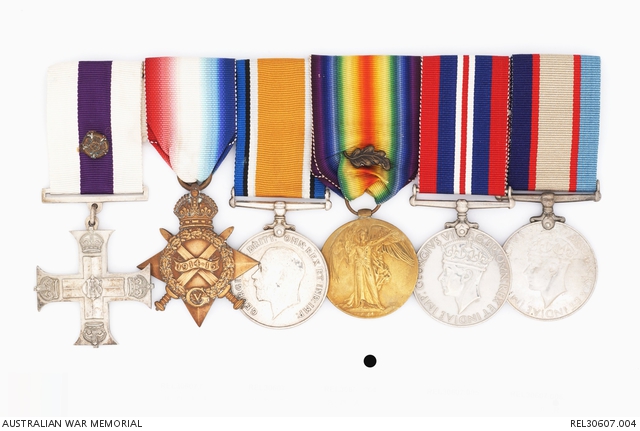 Born in Victoria in 1891, Edward Vivian Smythe served in both world wars. During the First World War he served as an officer with 24 Battalion, AIF, reaching the rank of major. He was awarded a Military Cross (MC) at Warlencourt, France, in 1917, and a bar to his MC at Broodseinde, Belgium, in 1918. He was also mentioned in despatches (MID). The recommendation for his MID reads 'A very plucky young officer who has shown great enterprise in action, and as a patrol leader. His cheery manner in action has had a marked effect on his men'. During the Second World War Smythe served with 2 Garrison Battalion at prisoner of war camps at Cowra, where he was camp commandant of A Camp from 1942-1943, and at Hay from 1943-1945. At both camps he was in charge of Italian POWs. In 1945 he transferred to the military administration in New Guinea and was involved in the repatriation of Japanese, Korean and Formosan POWs. He also conducted local courts martial and investigated local war crimes. He was discharged in Rabaul in 1947 and remained in New Guinea working for the Post and Telegraph Service until his retirement in 1961.