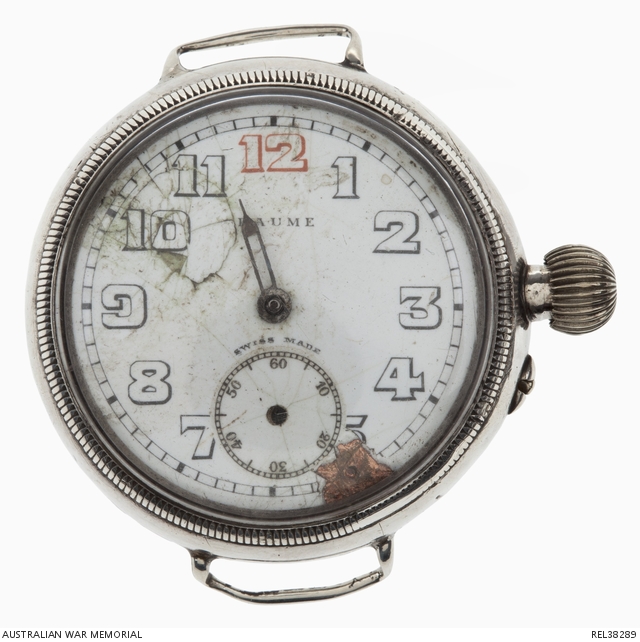 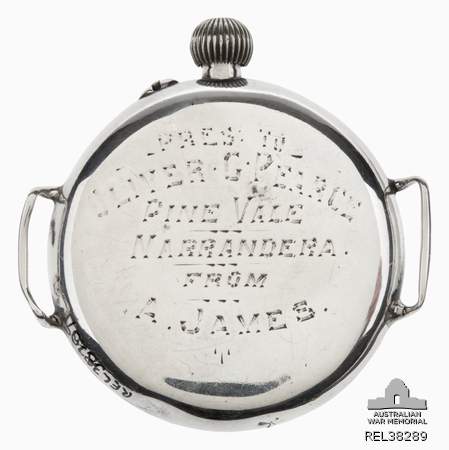 Silver wrist watch without straps. The face is made from white enamel with large black numbers except for the number '12' which is in red. The minute and second hands are missing and there are areas where the enamel is cracked or missing. Engraved on the reverse are the words 'PRES. TO OLIVER.G.PEARCE PINE VALE-NARRANDERA-FROM A.JAMES.'

This wrist watch was given to Private Oliver George Pearce by A. James, a pedlar who travelled the Narrandera district in New South Wales selling household goods. Born in Adelaide, South Australia, in 1916 Pearce was farming with his father, a property called Pine Vale near Narrandera when the First World War began. He enlisted in the Australian Imperial Force, aged 19, on 16 May 1916 from the town of Cootamundra and embarked for service overseas with 3 Reinforcements, Light Trench Mortar Battery on 25 October.

When he arrived in England he was transferred to 33 Battalion and arrived in France on 1 May 1917. He was killed on 13 October that year at Passchendaele during the Third Battle of Ypres. Having received a wound to his head and chest he was among the walking wounded making their way back to the regimental aid post when he was killed instantly by shell fire. His service record notes that he was buried in February 1918, but there is no known grave listed. His name is inscribed on the Menin Gate Memorial in Belgium.