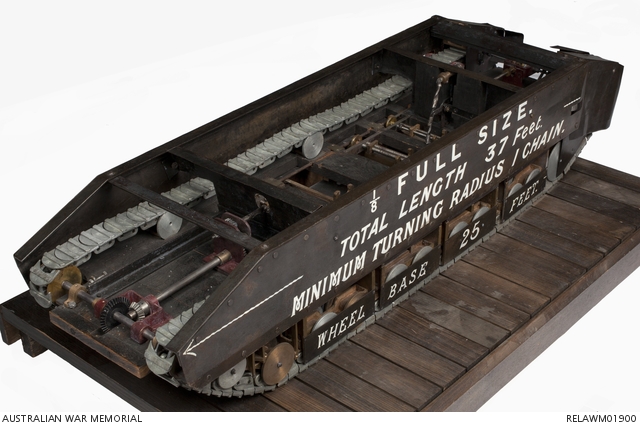 A 1/8 scale model of the lower hull and running gear of a tracked fighting vehicle designed by Lancelot 'Lance' De Mole. A contemporary photograph of the model - J00300 - is also held by the Memorial. The hull of the model is fabricated from steel plate. The vehicle is propelled by two continuous tracks on each side of the hull, running on 8 double bogies, with a drive sprocket on one end and an idler at the other. It was steered by pivoting the front sprocket drive through a small radius. The individual track links could themselves pivot on one another. This has the effect of warping the track towards the direction of travel. The entire upper surface of the model is open, allowing the interior steering mechanism to be visible. The model does not appear to have ever had provision for motorisation.

This model was built in 1917 by the Melbourne firm of Williams and Benwell, to the design of Lancelot de Mole, a South Australian inventor. De Mole had originally submitted a design for an armoured track-laying vehcile to the War Office in 1912, but the design had been rejected. He subsequently submitted improved designs in 1915, together with the offer of his services in any suitable capacity, receiving a reply that, without a working model, they could not use them at that time. When the Australian Inventions Board was appointed he submitted his designs to them, but without success. He then decided that his only chance of helping his country lay in his being able to get a model made, and taking it to England himself. As he had no money, it was also necessary that his health be improved sufficiently to allow him to enlist in the army. He tried in August, 1916, but was again rejected. He finally succeeded in enlisting in September 1917 and sailed for England with the 10th Battalion in October.

Getting 'duty leave' from Sutton Veny camp, he proceeded to London, and had a room at the Munition Inventions Department placed at his disposal. The model went before a committee of experts, but de Mole was not allowed to appear with it. They reported satisfactorily, and recommended that it be sent before a second committee, and that de Mole be re-called from Sutton Veny camp in order to demonstrate the capabilities of his invention. After waiting six weeks in camp, and writing and telegraphing without success he again got leave, and went up to London on March 18 to make inquiries about it. After some trouble he found that the model was in a basement in one of the Government departments and the correspondence in a pigeonhole. It had never reached the second committee stage. Within a week, de Mole was recalled to camp on account of the German Spring Offensive, and was sent together with every other available Australian soldier to fight in France. He fought at Villers Bretonneaux, Merris, and Meteren, and remained in France till after the armistice.

A Royal Commission was established after the War to recognise and reward those whose inventions had contributed to the war effort. Although the Commission found that there was no evidence that de Mole's invention had had any influence on British tank designs, and indeed that the Landships Committee and those who were tasked with producing the first workable tank in 1915 and 1916 were unaware of de Mole's work, the Committee nonetheless awarded him 965 pounds for expenses incurred. He was later appointed CBE. A critical analysis of de Mole's design, and particularly its size, weight, steering and power, was given by Lt H.R. Gates, Royal Engineers, in The West Australian, 15 August 1924 p 11.

The model was acquired by the Australian War Museum, later War Memorial, shortly after the First World War.