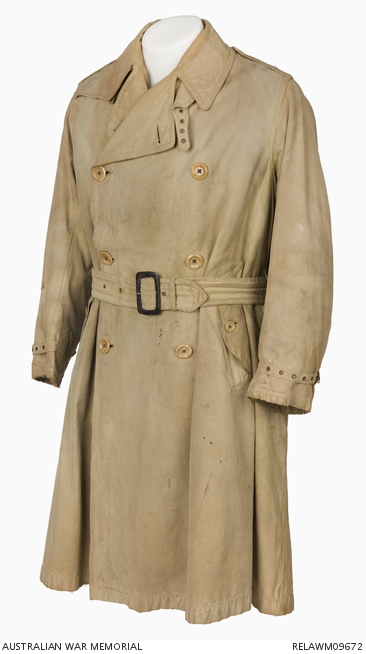 Privately purchased khaki cotton gabardine double-breasted trench coat with fall collar. The collar points are rounded, and there is a tab under the left lapel with four brass eyelets. A brass buckle sits under the corresponding lapel, allowing the collar to be closed in a turned up position in bad weather. The neck is fastened with a large brass hook and eye. The front of the coat has two rows of three large plastic buttons. A vertical buttoned slash pocket sits on either side of the waist. Shoulder straps are secured at the collar end with a plastic button, with slits indicating the position of badges (removed). A triangular buttoned flap covers the right front of the shoulder. The self-fabric belt is held in place with fabric loops on either side of the waist, and the buckle is leather covered metal with a brass prong and six metal eyelets . There are four brass 'D' rings hanging from the belt. A single central back vent with fabric gathered behind extends from the waist to hem.

The coat is fully lined with oil impregnated cotton, and a tartan wool/cotton blend twill. An embroidered makers label reads, 'POROUS HYGIENIC/ AQUATITE REGD LONDON MANCHESTER/ MADE IN ENGLAND'. There are adjustable self fabric tabs to secure the coat around the wrists with eight metal eyelets, and a ferrous and brass buckle.

Charles Edwin Woodrow Bean was born at Bathurst, New South Wales on 18 November 1879, but moved to England with his family when he was ten. Bean was educated in England, concluding with the study of classics and law at Oxford University. In 1904 he returned to Australia, and after working as a lawyer, joined the Sydney Morning Herald as a reporter in 1908.

In September 1914, Bean was selected as the Official War Correspondent, and was given the rank of honorary captain in the AIF. He landed with the infantry at Anzac Cove at 10am on 25 April 1915. Bean stayed on the peninsula for most of the campaign, experiencing the same deplorable conditions as the soldiers. Although he was hit by a bullet on August 6, he insisted on remaining on the peninsula, only finally evacuating on 17 December. This was only a few days before the withdrawal of the rest of the Australian troops.

He travelled to the Western Front with the AIF, continuing to record his personal experiences of war, as well as those of the soldiers. He was involved in all but one of the engagements of the Australian troops on the front lines, giving him a good overview of the action. He would later describe acts on an individual level, as well as from the wider perspective. It was at this time that he began planning for the establishment of a museum to preserve the memory and relics of the Anzacs. After six years of trying, bean was finally allowed access to the war diaries of all British troops, and associated unit. In 1919 Bean also revisited the battlefields of Gallipoli with the Australian Historical Mission, and began the first volume of the 'Official History', which was published in 1921. It took another 21 years for the12 volumes to be completed.Also in 1921, Bean married Ethel Young, and adopted a daughter.

The culmination of his efforts took place on 11 November 1941 with the opening of the Australian War Memorial in Canberra. With the onset of World War II, however, it was soon realised that the AWM would need to include commemoration of other conflicts involving Australian servicemen and women.

Charles Bean can be seen wearing this trenchcoat in the 1919 Lambert portrait of him (ART07545). Although some of the clothing worn by him during his service as a war correspondent was of a standard army pattern, he generally tried to avoid items of army uniform. Instead, he deliberately purchasing khaki or drab coloured clothing, like this trench coat, that was similar to army uniform and would blend with the uniforms of the men around him, while making it clear that he was not part of the military.