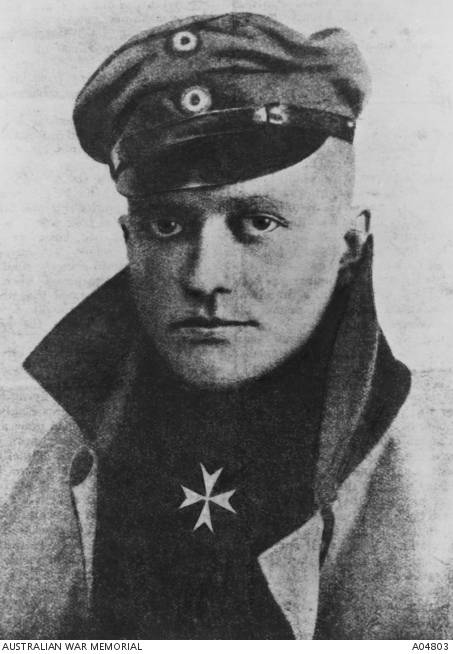 The death of Manfred von Richthofen, or the Red Baron, on 21 April 1918, has been the subject of much interest and controversy. Canadian, Australian and British servicemen have all claimed the right to be accredited with striking the blow that ended the career of Germany's greatest ace pilot, with 80 victories to his credit.

Private Alfred Fowler, with the 40th Australian Battalion, witnessed the Red Baron's death. He recalls delivering a message to a gunner at the 11th Battalion, who opened fire on Richthofen's plane and claims to have seen the bullets pierce the cockpit. Running to the wreckage, Fowler saw bullet wounds in Richthofen's chest, and was convinced he had been killed by the gunners. Despite this, the attending surgeons at Richthofen's autopsy were of the opinion that the angle and nature of the bullet wounds ruled out the possibility that he had been shot from the ground, and that the injuries were due to the efforts of a Canadian pilot, Roy Brown.

After years of conflicting opinions and recollections by witnesses that remain to be resolved, it was stated that the Australian Lewis gunners were most likely responsible for Richthofen's death. This issue continues to be an interesting debate in the history of World War I which, 80 years later, is still shrouded in controversy and confusion.

Within a day of being recovered from its crash site, most of Richthofen’s plane had been souvenired, leaving little more than a frame. Among the items later handed over to the Australian War Records Section (in this case by Lieutenant W. J. Warneford, the Equipment Officer of 3 Squadron, AFC, who had salvaged the plane) was the control column. The photo shows the top control section of the column, which has been twisted to the right, and the left auxilary throttle handle, which has broken off its housing. This damage is likely to have occurred at the moment of impact. Contemporary accounts of the crash specifically state that Richthofen’s hands were so firmly gripped around the handles of his control column that they had to be prised off. 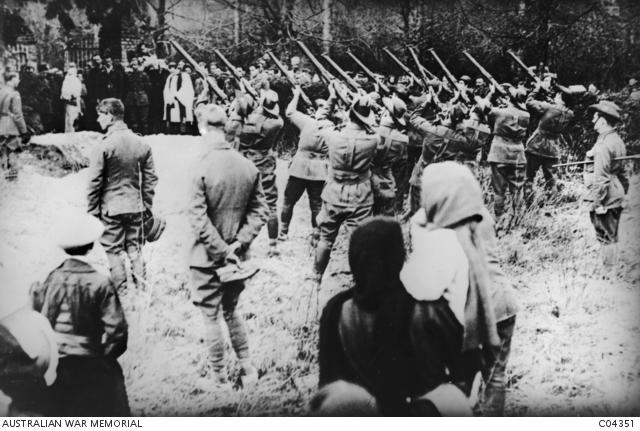 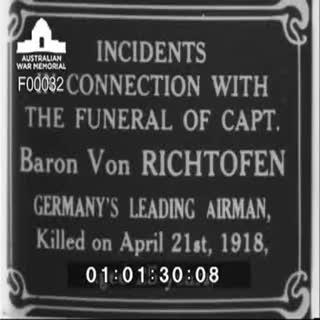 Video of Incidents in connection with the funeral of Captain Baron von Richthofen Germany's leading airman.