Technology, Weaponry and Communications in 1918

As I write, at regular intervals comes the whine and crash of an 8 inch shell bursting a couple of hundred yards away and the patter of the pieces on the roof.
- Letter, Lance Corporal A.H. McKibbin, 1918.

The First World War was said to be the first truly technological war. Many ideas were pioneered over the four years, such as the use of tanks, and new systems of communication. In 1918, the most modern developments of war technology and innovation were in use. However, the rise of technological warfare did not result in fewer deaths or injuries. In fact, some argue that it had quite the opposite effect.

A picture of a man and his rifle, entitled "Oiling his friend", from the diary of Private Albert Golding.

THE SHELL
A shrieking wail goes by
And a distant boom and a glow,
White wreaths of smoke floating up to the sky,
And a crimson stain on the snow.
by "PIP", from the soldier's magazine, Aussie, 8 March 1918.

The rifle and bayonet were almost the infantryman's only weapons at the beginning of the war. By 1918 he had become a specialist trained to use and respond to a variety of arms. The rifle remained the standard weapon of the British armies, but now its use had to complement the deployment of Lewis guns, grenades, rifle-bombs and light mortars, as these new weapons assumed an increasingly important place within the infantryman's armament.

Artillery was the dominant weapon in the battlefield in 1918. Guns fired high explosives, shrapnel, smoke and gas shells. They could provide barrage or harassing fire, bombardments and counter-battery firing; they could also be used against enemy aircraft. The effective use of artillery shifted the advantage from the defender to the attacker. Technological advances in the calibration of guns removed the need to fire adjustment shots before a battle and added the element of surprise.

One kind of light machine-gun, the Lewis gun, was often used by Australian troops. It was designed by Isaac Lewis in 1911, weighed about 12 kilograms, and could fire at a rate of approximately 500 bullets a minute. It provided the fire-power of 50 riflemen and brought a change to basic infantry tactics. Under the covering fire provided by a platoon (about 40 men) with one or two of these guns, rifle and bombing sections could then assault enemy positions. Machine-guns were also used in tanks. 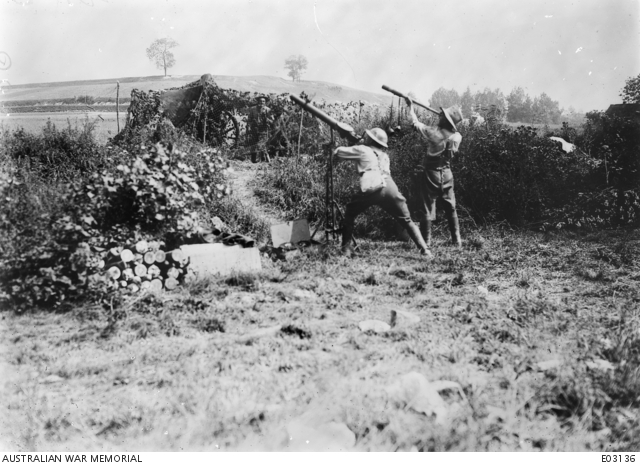 A Lewis Gunner of the 30th Battery of Australian Field Artillery engaging enemy aircraft flying over Mericourt, France, on 23 August, 1918.

In late 1918, the British government produced more munitions, in an effort to end the war more quickly. One of the better improvements was a system called "sound-ranging" for artillery, which could determine the exact position of enemy batteries, and then accurately position guns for that area before a battle. Many of the guns used in the First World War were enormous, such as the German Amiens Gun.

Planes were an important part of the warfare of the First World War, and although the Allied Flying Corps were relatively small, their work during the war led the way for the crucial role planes would play in the Second World War. As well as bombing and firing on enemy positions, and preventing enemy planes from bombing Allied areas, planes were used for moving supplies and for aerial photography during attacks, to map positions.

Other common weapons used in the war were grenades (exploding bombs that were thrown or fired at enemy trenches), various types of gas, trench mortars, and rifles with bayonets for close-range fighting. 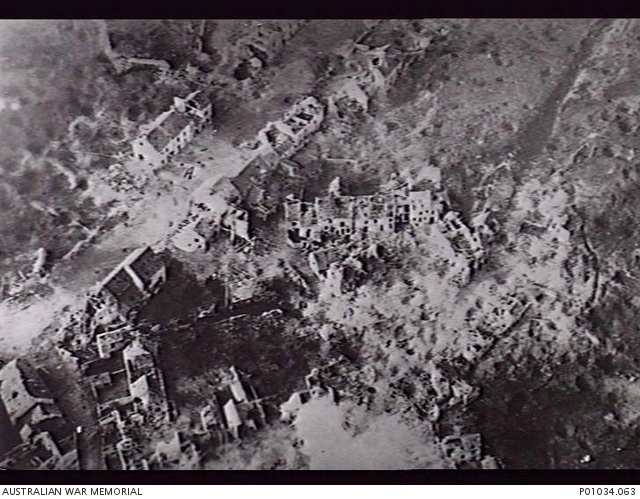 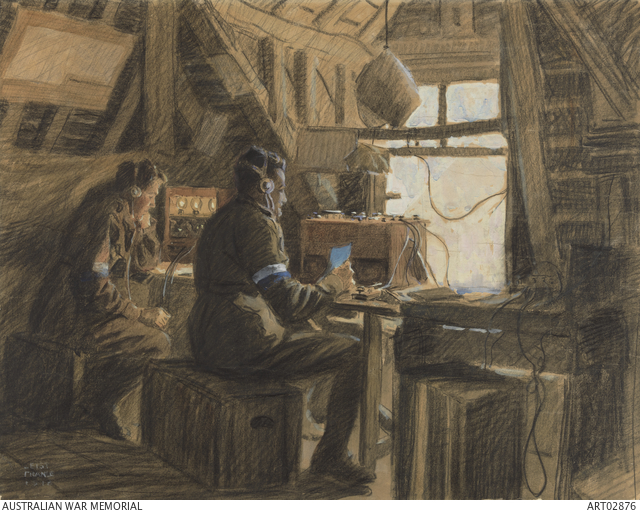 Although communication systems remained quite primitive during the war compared with today's standards, there were significant improvements by 1918. For example, early model Continuous Wave (CW) wireless (radio) sets and "spark" or "loop" sets were a great development on earlier systems of communication. With them, different groups on the battlefield could communicate quickly, without requiring men as messengers. The role of these systems was primarily to transmit messages from relay stations to battalions and brigade headquarters during the fighting. The radio system used by the Royal Air Force, although fairly unsophisticated, allowed aerial views of troop movements to be communicated faster and more effectively. For more on this, read about the battle of Hamel.