A camera on Gallipoli 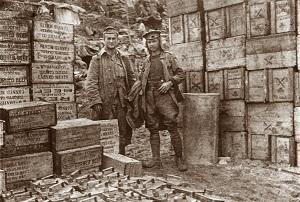 ​​In 1915 soldier and surgeon Sir Charles Ryan captured the Australians’ experience on Gallipoli via a series of candid photographs. Ryan’s sensitivity, his empathy with those on both sides, and his eye for the remarkable – and the remarkable in the everyday – are apparent in his photographic work. These images take us behind the stirring accounts of battle being reported at home to reveal the dry, forbidding landscape, tired troops in the trenches, squalid dug-outs, and the horrendous task of burying the dead. Here, in Ryan’s display of mateship, stoicism and dogged endurance, is the spirit of Anzac.

Beyond the photographs in the exhibition is the story of Charles Ryan’s remarkable life, encompassing his service as a doctor with the Turkish army in 1877–78, his close encounter with Ned Kelly, whom he treated at Glenrowan, his time as a leading Melbourne surgeon, his long service as a senior military officer, and the high civil and military recognition extended to him by his peers.