This company of brave men: the Gallipoli VCs 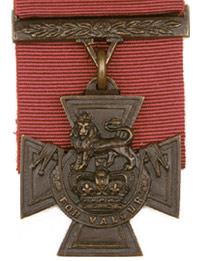 The Victoria Cross is a rare award, given when the nation is at war, facing peril or a great test of national commitment. It recognises individuals who, by their extraordinary deeds of bravery, and sometimes at the sacrifice of their own lives, provide leadership and example to all around them and beyond. The entire nation draws pride and inspiration from these brave men.

The Victoria Cross in Australia

The Victoria Cross is the highest form of recognition that can be bestowed on a soldier for remarkable and unselfish courage in the service of others. There is no greater single honour, award, or accolade.

All ranks of the services are eligible for the Victoria Cross. It is democratic in its nature and its distribution reflects great integrity. It upholds the human virtues of courage, devotion, sacrifice, and compassion.

The award has its origins in the mid-nineteenth century, when Queen Victoria was convinced that a special tribute was needed to recognise acts of outstanding courage. In 1856 the cross bearing her name was instituted.

Despite its elevated status, the Victoria Cross is not made from gold or other precious metal but cast from the bronze of old captured cannons. It is suspended from a plain maroon ribbon (those to the navy originally used blue, but this changed at the end of the First World War). Since the Boer War a number of awards have been made posthumously.

In 1991 Australia extended its own system of honours and awards. Wishing to maintain the tradition and esteem of the Victoria Cross, however, it made only minimal changes to the highest award by instituting the Victoria Cross for Australia.