Overview of Australian military involvement in the Vietnam War, 1962 - 1975

Australia’s military involvement in the Vietnam War was the longest in duration of any war in the country’s history. It lasted from August 1962 until May 1975. The Australian commitment consisted predominantly of army personnel, but significant numbers of air force and navy personnel and some civilians also took part. According to the Nominal Roll of Australian Vietnam Veterans, almost 60,000 Australians served in Vietnam. 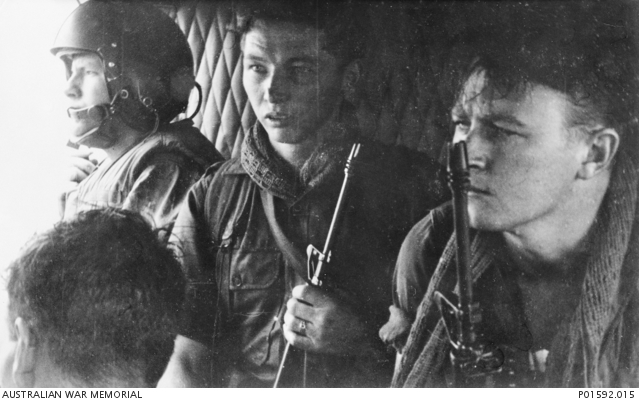 A total of 521 Australians died in the war: Australian Army (496); RAAF (17); RAN (8). These include three Australian servicemen who were declared “missing in action”. These three are in fact believed to have been “killed in action” but have no known graves.

Australia's commitment, although substantial in terms of its military capabilities, was small in comparison with the military contributions of the United States. Over 3 million Americans served in the War and the total number of American personnel in Vietnam reached a peak of over 540,000 in 1968. About 58,000 Americans died in the Vietnam War and over 2,000 were listed as Missing in Action.

In September 1946 the Vietnamese Communist Party leader, Ho Chi Minh, proclaimed Vietnam's independence from French colonial rule, while France proceeded to establish the state of Vietnam, eventually installing the former emperor Bao Dai at its head. The First Indochina War began in late 1946 and lasted until May 1954, when Viet Minh forces defeated the French army at Dien Bien Phu.

In July 1954 the Geneva Accords were signed to conclude the Indochina War and Vietnam was temporarily partitioned, at the 17th parallel, into a Communist-ruled north, backed by the USSR and China, and non-Communist south, supported by the United States. Under the terms of the accords national elections were to be held by July 1956 to decide on the unification of the country. When the elections were stalled, North Vietnamese forces and Communist guerrillas resumed an insurgency war of terror and political indoctrination against the government and people of South Vietnam.

The involvement of Australian forces in Vietnam was a gradual process of escalating commitment which took place over a period of several years against a background of Cold War concerns with regional security and fear of Communist expansion. The cornerstone of Australian defence planning in the early 1960s was 'forward defence', a concept which complemented the United States policy of 'containment' of Communism in south-east Asia and embraced Australia's obligations under the South-East Asia Treaty Organisation (SEATO). 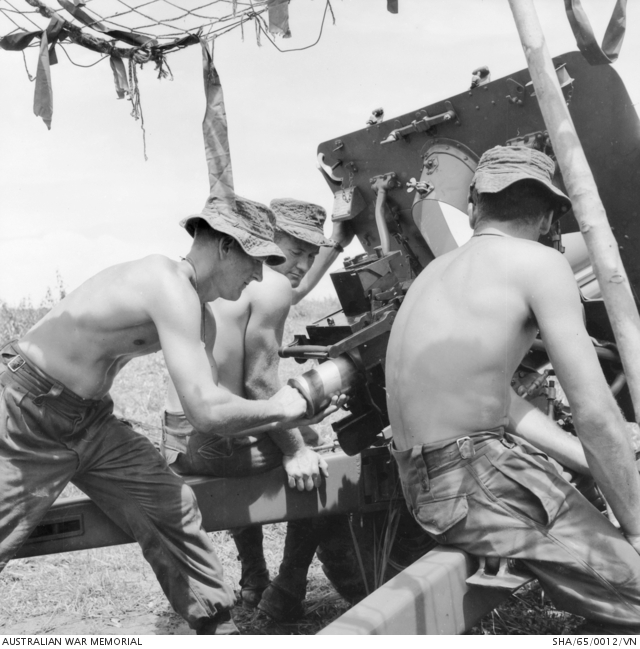 Loading a shell into a 105mm pack howitzer, September 1965

In 1961 and again in 1962 the South Vietnamese government requested general aid from the Australian government to improve security and assist in economic and social development. In August 1962 a small team of thirty Australian Army advisers was sent to Vietnam to operate within the United States military advisory system of over 2,000 advisers already there. They assisted in training army elements of the Republic of Vietnam but were under instructions not to accompany Vietnamese forces on operations. The Australian Army Training Team Vietnam became the most highly decorated Australian unit in the war, receiving all four Victoria Crosses awarded, the Republic of Vietnam Cross of Gallantry with Palm Unit Citation and the United States Army Meritorious Unit Commendation.

By January 1965 the number of Australian advisers had been increased to 100 within a total strength of over 23,000 American advisers, deployed in training centres all over South Vietnam; despite this, the Viet Cong continued to grow in support and strength and the tide of the war was turning against the South.

Following the arrival of the first American combat troops in Vietnam in March 1965, Prime Minister Menzies announced on 29 April the decision to commit an Australian battalion to service there. This unit was established in Vietnam by June 1965 and served under the operational control of the US 173 Airborne Brigade (Separate) as its third battalion. In September 1965 the battalion was expanded to a battalion-group of 1,400 men with supporting elements including artillery, engineers, a reconnaissance flight and logistic support. Based at Bien Hoa, north of Saigon (present day Ho Chi Minh City), the battalion and the expanded battalion-group carried out counter-insurgency operations with combined US forces in the III Corps military area until its return to Australia in June 1966. Between 1965 and 1966 the rapid build-up of American forces in Vietnam to more than 385,000 personnel slowed the Communist advances and stabilised the situation in the country.

In March 1966 the Australian commitment was expanded to an independent task force of two battalions with combat and logistic support. The task force totalled 4,500 men including 500 national servicemen from the first intake under the National Service scheme introduced in November 1964. The task force established its base at Nui Dat in the heart of Phuoc Tuy province (present day Ba Ria-Vung Tau province). Although under the nominal control of the American II Field Force Vietnam, the task force retained a degree of operational independence, enabling it to practise its distinctively Australian approach to counter-insurgency. This it did very effectively. In August 1966, at Long Tan, an overwhelming defeat was inflicted on a massed enemy formation by a single Australian company supported by artillery, APCs and RAAF helicopters. By the end of 1966 the task force was expanding its area of operations and consolidating control over areas of Phuoc Tuy province.

Throughout 1967 and 1968 the task force was steadily increased in size and effectiveness with the addition of a third battalion, tanks and a Civil Affairs Unit. From the beginning of 1969 to mid-1970, a peak force of more than a third of Australia's available combat strength was deployed in Vietnam. It comprised elements from all three services: a three-battalion Army task force with combat and logistic support; an Army advisory team; RAAF helicopters, medium bombers and transport aircraft; and RAN guided-missile destroyers and helicopters. In this period of heaviest commitment more than 8,500 Australian service personnel (over 7,000 of them Army personnel) were deployed in Vietnam.

The escalation of Western military commitment to Vietnam was accompanied by a gradual rise in popular opposition, both in Australia and abroad, to involvement in the War. For the first few years, the Australian commitment in Vietnam was supported by the majority of Australian people. However by the late 1960s that support had been substantially eroded. The apparent reversal of the Tet Offensive in early 1968 and the commencement of formal peace talks in Paris in 1969 provoked worldwide opposition to continuing involvement in the War. Australian opposition reached a peak in the large Moratorium rallies in Australian cities in 1970 and 1971.

In June 1969, as the South Vietnamese armed forces assumed greater defence responsibility, President Nixon announced that the US would begin to withdraw its forces. Following further US withdrawals in April 1970, Prime Minister Gorton announced a reduction of Australian forces by one battalion.

Throughout 1971 and 1972 the reduction of Australia's forces continued under the administration of Prime Minister McMahon. By the end of 1971 the Australian Army presence had been reduced to 2300 personnel. By mid-1972 less than 200 Australian personnel remained and in December 1972 Prime Minister Whitlam announced the withdrawal of the final contingent. On 26 February 1973 Prime Minister Whitlam announced the establishment of diplomatic relations with the Democratic Republic of Vietnam (North) while retaining diplomatic recognition for the Republic of Vietnam (South). The last elements of the Australian Army left Vietnam in June 1973.

After the withdrawal of Australian and US troops the war escalated, with the Soviet-equipped North Vietnamese Army and Viet Cong increasingly winning the upper hand. In April 1975, after a victorious campaign, the North Vietnamese Army entered Saigon and the President of the Republic of Vietnam surrendered unconditionally. The formal announcement of the reunification of the two Vietnams was made in 1976 with the declaration of the Socialist Republic of Vietnam.

There was a conspicuous gap between the 'hawkish' political rhetoric of successive Liberal-Country Party governments and the actual level of Australian military commitment to the Vietnam War. Australia never undertook a commitment to the Vietnam War either comparable with that of its larger ally, the United States, or indeed ever approaching the level requested by the Americans. The rhetoric of Prime Minister Holt's much-quoted slogan, 'All the way with LBJ!', was never matched by reality.

The official estimate of the cost of the War, above the normal cost of maintaining the armed forces in Australia, was $43 million at the time of peak involvement between 1967 and 1970, amounting to a total of $218.4 million from 1962 to March 1972.

Of over 804,000 Australian men who registered for National Service, almost 64,000 (about 8 per cent) were called up. Less than one third of those called up, 15,381 (2 per cent of the total registered) served in Vietnam, where they constituted no more than 50 per cent of each Army unit.