Out in the Cold: Australia's involvement in the Korean War - Maps: the course of the war 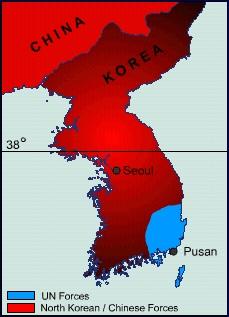 The initial period of the war was a desperate struggle between the two forces, in which UN forces were close to being driven out of Korea. This period ended with the establishment of the Pusan perimeter, a defensive line 230 km long, which protected the main approaches to the strategically vital southern port of Pusan. 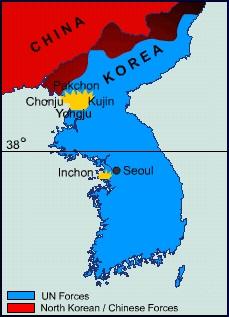 Increasing numbers of US and other UN forces entered the war, resulting in a near victory over the North Koreans. An important landing of UN forces was made at Inchon. After the allies crossed the 38th parallel, China also entered the war. Australian troops saw their first action at Yongju, followed by Broken Bridge (Kujin), Chongju, and Pakchon. 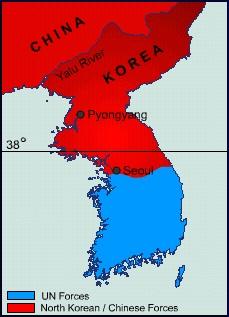 In this phase, over half a million Chinese troops entered the war, launching several offensives that pushed the UN forces almost back to the 38th parallel. In the bitter fighting of the winter of 1950-51, heavy losses were sustained by both sides. After being pushed back from the Yalu River and the Chinese border, the UN Command was forced to abandon first Pyongyang on December 5, and then Seoul on January 4. General Douglas MacArthur, Commander of the UN forces in Korea, was dismissed by US President Harry S. Truman on 11 April. There had been public dispute between the two men, as Truman had countermanded MacArthur's desire to extend the war into China. MacArthur was replaced by General Walton Walker. When Walker was killed in a road accident, General Matthew Ridgeway took his place. 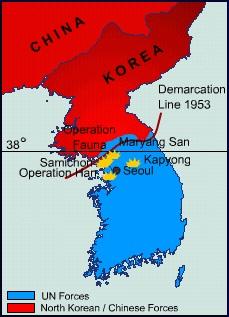 As armistice negotiations began, a stalemate developed on the battlefield, with action consisting mostly of trench warfare. The battle line surged southwards again as the Chinese launched a major offensive on 22 April 1951. It met with stubborn resistance in several sectors, particularly those held by the Gloucestershire Regiment on the Imjin River, north of Seoul. The Canadian and Australian battalions at Kapyong, further west, also checked the advance. By 30 April 1951, the Chinese thrust towards Seoul had been turned back and the battle line again moved northwards. In July 1951, HMAS Murchison engaged North Korean forces on land as part of Operation Han. As the stalemate continued, each side vyed for control of key local features. One of these was Maryang San, captured by 3 RAR in early October. General Mark Clark replaced General Matthew Ridgeway as Commander of the UN forces on 12 May 1952. In December 1952, 1 RAR led Operation Fauna. The battle at The Hook (Samichon) in July 1953 was Australian troops' last action of the war.