Establishment of the Australian War Memorial

As few of those grieving over the loss of their loved ones would get to Gallipoli or the Western Front, Charles Bean conceived the idea of an Australian war memorial. It was to be a place where those who were mourning could visit to commemorate the sacrifice of those who had been killed.

An architectural competition failed to produce a satisfactory individual design. Sydney architects Emil Sodersteen and John Crust were encouraged to submit a joint design, combining Sodersteen’s vision for the building and Crust’s concept of cloisters to house the Roll of Honour. This was accepted in 1927.

The Memorial’s foundation stone was laid on 25 April 1929, but work was curtailed by the onset of the Great Depression. Work on the main structure began in 1936 and was finally completed in 1941 – by which time the nation was embroiled in another war. The Memorial was officially opened on Armistice Day 1941 by Prime Minister John Curtin. The First World War – the war to end all wars – had been for nought.

The inauguration of the Australian War Memorial, Canberra, Anzac Day 1929

Louis McCubbin chose for this work a grand view from the bottom of Mount Ainslie, looking towards what is now Anzac Parade and Parliament House. By using a sweeping perspective, he captured the crowd of people as well as the bush landscape that dominated Canberra in the early years of its development.

The ceremony was broadcast nationwide on radio. First World War veterans acted as a catafalque party, while cadets from the Royal Military College and the Royal Australian Naval College formed the guard of honour. 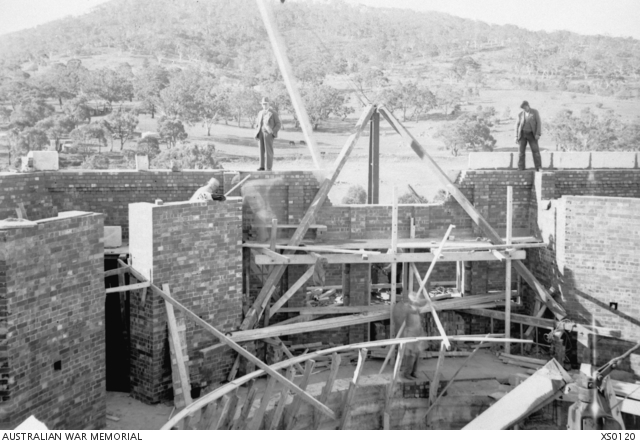 Construction of the Australian War Memorial

Construction of the Australian War Memorial, showing detail of the base of the dome in August 1940, with a government official standing central.