The First World War Galleries are now open after a major redevelopment.

The Joint Standing Committee on Public Works reviewed the project in February 2013 and parliamentary approval for it to proceed was given on 18 March 2013.  You can access a copy of the Memorial’s submission and the Committee’s report here.

Speeches from the official opening

The Galleries were officially opened on 22 February.

Since the opening of the Memorial in 1941, the First World War galleries have undergone several major alterations and many small iterative changes.  Originally comprising the entirety of exhibition space in the Memorial building, they now occupy the prominent west wing of the Memorial’s ground level galleries.

Before the process began, the old First World War galleries.

Despite changes down through the years, the galleries include some of the oldest and relatively unchanged parts of the Memorial building.  Significant heritage value can be found in the form of the architectural spaces; the fabric, fixtures and fittings; and the function and character of the galleries.  A major redevelopment of the galleries presents a significant challenge in retaining and restoring these values while simultaneously acknowledging the changed concept of commemoration and presenting the story of the First World War with veracity, depth and relevance to Australians today.

The design of the First World War galleries has been undertaken by Cunningham Martyn Design.  The exhibition will be staged to suit the restored gallery spaces and the story of the First World War will be returned to a chronological presentation commencing in 1914 and concluding with the immediate and enduring legacies of the conflict. 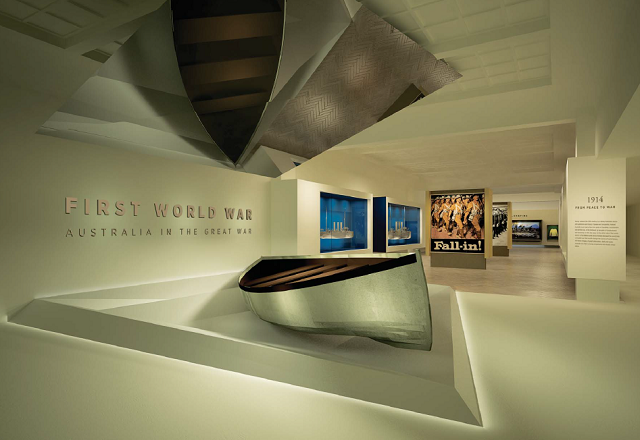 Artist’s impression of the entrance to the new First World War galleries.

The spatial treatment provides open vistas to the length of each of the galleries and a clear separation between the interior fit-out and the c.1940s building allowing the volume of the original gallery spaces to be experienced.  The colour and texture of the exhibition will reference the period to reflect the time and place of the story.

The Memorial holds one of the world’s great collections of material related to the First World War, and the redevelopment of the galleries presents a unique opportunity. Historic items which have been unseen for many years will be returning, together with significant newly-acquired items such as a 4.5” Howitzer and relics from the 2010 excavations at the Pheasant Wood mass grave site. 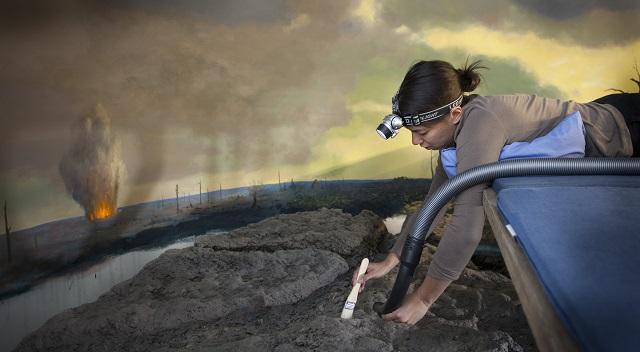 The iconic dioramas will remain an integral part of the galleries.  Some of the Memorial’s original dioramas no longer exist, having been damaged or removed during earlier building renovations when they were considered to be merely exhibition displays rather than works of art.  Today, 13 First World War dioramas are held in the National Collection.  Ten of these dioramas are planned for display in the new exhibition, including two desert campaign dioramas - Semakh and Desert Patrol - which have not been publically displayed since the 1980s.  Desert Patrol depicts a light horse patrol in the Sinai desert and will replace the Romani diorama.  Semakh depicts the events of 25 September 1918 when the 11th Light Horse Regiment attacked the village of Semakh, in Palestine.  Its inclusion in the galleries is of particular importance as recent research into indigenous service has revealed that the 11th Light Horse Regiment had the largest known group of indigenous Australians in one AIF unit. You can read all about the conservation of the dioramas on our blog.

Famous Australian leaders such as Sir John Monash and Sir Harry Chauvel will feature prominently in the story, along with lesser known – but no less important – soldiers, sailors, airmen and nurses. The new galleries will tell the story of Australia’s First World War in a coherent chronological fashion, allowing visitors to understand the progress of events as they occurred.  While the strong focus will be upon the battlefield exploits of the AIF, whose men contributed the vast majority of the nation’s 62,000 dead, other important aspects such as the war on the home front and at sea will not be neglected, and the enduring impacts on the nation is examined.

The project is being undertaken in accordance with the Memorial’s specific delivery strategy for major gallery redevelopments which involves the staging of works in three phases:

Phase 1:  permanent construction to the base of the building to prepare it for the exhibition commenced in June 2013 and is scheduled for completion in February 2014

Phase 2: the second phase of work comprising exhibition-specific infrastructure commenced in November 2013 and is scheduled for completion in August 2014

Phase 3: the third phase of work comprising all items to be installed in the exhibition, such as collection material, has been undertaken concurrently with the first two phases of work and is scheduled to be completed in late 2014

It is planned to open the new galleries to the public in late 2014, prior to an official launch in February 2015.

Dr Brendan Nelson discusses the changes to the galleries

Director of the Australian War Memorial, Dr Brendan Nelson, discusses the changes to the Memorial's First World War galleries in the lead up to the Centenary.

Check out how the gallery redevelopment progressed on Flickr