Participation in the British Commonwealth Occupation Force (BCOF) marked the first time that Australians were involved in the military occupation of a sovereign nation which it had defeated in war. BCOF participation in the Allied occupation of Japan was announced on 31 January 1946, though planning and negotiations had been in progress since the end of the war. The main body of Australian troops arrived in Japan on 21 February.

The entire BCOF force totalled 45,000, from Britain, India, New Zealand, and Australia. About 16,000 Australians served in BCOF, including an infantry contingent of 4,700, base units consisting of 5,300, an air force wing of 2,200, and 130 from the Australian General Hospital. The Royal Australian Navy (RAN) also had a presence in the region as part of the British Pacific Fleet. For two-thirds of the period of occupation the Commonwealth was represented solely by Australians, and throughout its existence BCOF was always commanded by an Australian officer. 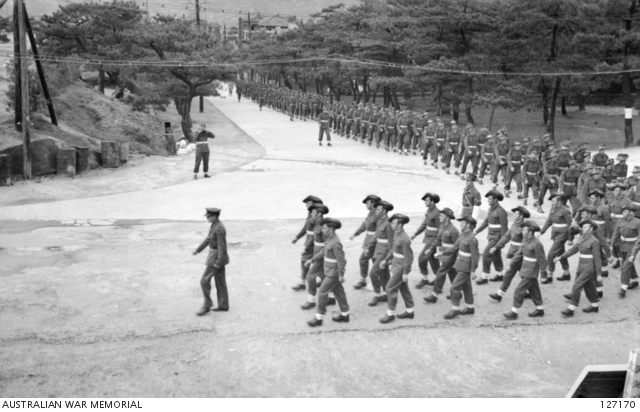 The BCOF area of responsibility was the western prefectures of Shimani, Yamaguchi, Tottori, Okayama, Hiroshima, and Shikoku Island. BCOF headquarters were located at Kure, the army was encamped at Hiro, the RAAF at Iwakuni, and the naval shore establishment at the former Japanese naval base at Kure. At the peak of its involvement the Australian component of BCOF was responsible for over twenty million Japanese citizens and 57,000 square kilometres of country. Adjacent to the area of Australian responsibility were prefectures occupied by the 2 New Zealand EF (Japan), the British and Indian Division (Brindiv), and further away the US 8th Army.

The main Australian occupation component was the 34th Infantry Brigade, which arrived in early 1946 and was made up of the 65th, 66th, and 67th Battalions. The RAN ships that served were HMAS Australia, HMAS Hobart, HMAS Shropshire, and the destroyers HMAS Arunta, Bataan, Culgoa, Murchison, Shoalhaven, Quadrant, and Quiberon. Landing Ships Infantry Manoora, Westralia, and Kanimbla were used for transport. 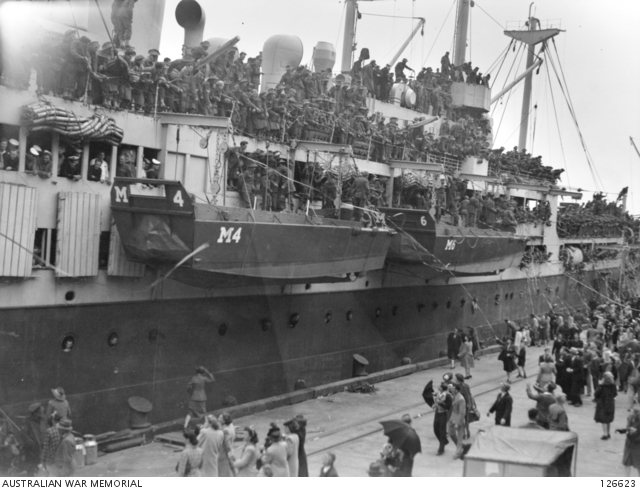 The Royal Australian Air Force (RAAF) component was stationed at Bofu, in Yamaguchi Prefecture. The RAAF squadrons which served were No.'s 76, 77, and 82, all flying Mustangs. The airforce component of BCOF was known as BCAIR. By 1950 only one Australian squadron, No. 77, remained in Japan. 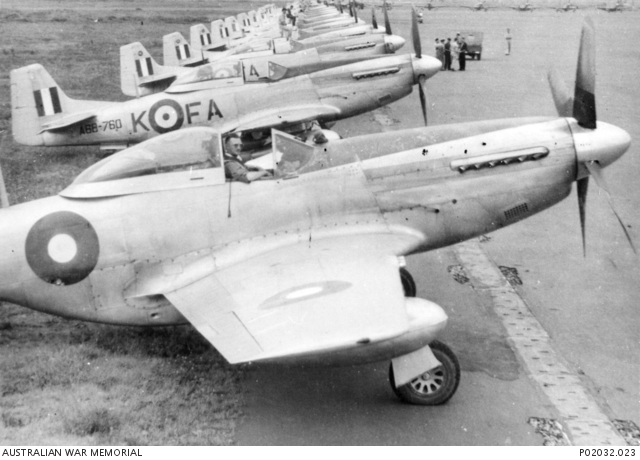 Line-up of Mustang aircraft of No. 82 (Fighter) Squadron, RAAF, BCOF, which participated in a fly-past over Tokyo and were based temporarily at the United States Air Force (USAF) base at Kisarazu, 1947.

By early 1947 BCOF had begun to decline and, by the end of 1948, was composed entirely of Australians. The force was dismantled in 1952, as responsibilities in Japan were handed over to the British Commonwealth Forces Korea. Some personnel stayed on to serve in the Korean War. Members of No. 77 Squadron, for example, had their "going home" celebrations interrupted by the news they were to be sent immediately to Korea. BCOF ceased to exist on 28 April 1952 when the Japanese Peace Treaty came into effect. 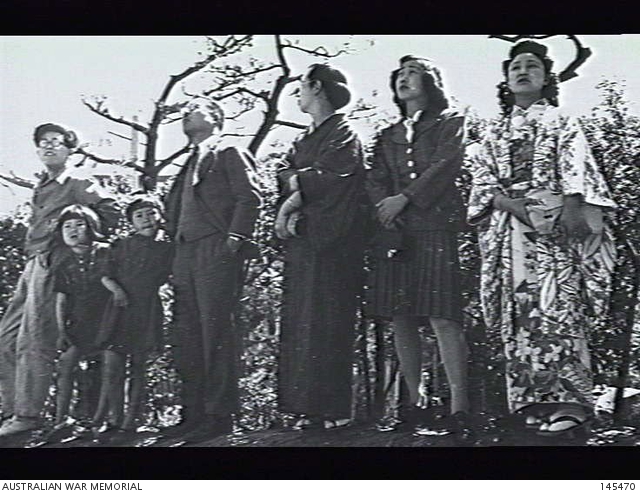 The primary objective of BCOF was to enforce the terms of the unconditional surrender that had ended the war the previous September. The task of exercising military government over Japan was the responsibility of the United States forces. BCOF was required to maintain military control and to supervise the demilitarisation and disposal of the remnants of Japan's war-making capacity. To this end, Australian Army and RAAF personnel were involved in locating and securing military stores and installations. The intelligence sections of the Australian battalions were given targets to investigate by BCOF Headquarters in the form of grid references for dumps of Japanese military equipment. Warlike materials were destroyed and other equipment was either retained by BCOF or returned to the Japanese. The destruction or conversion to civilian use of military equipment was carried out by Japanese civilians under Australian supervision. Regular patrols and road reconnaissances were initiated and carried out in the Australian area of responsibility as part of BCOF's general surveillance duties.

The RAN component of BCOF was responsible for patrolling the Inland Sea, to prevent smuggling and the illegal immigration of Koreans to Japan. It was assisted by the RAAF whose aircraft were also involved in tracking vessels suspected of smuggling or transporting illegal immigrants. RAAF squadrons also flew surveillance patrols over each of the prefectures in the BCOF zone in order to help locate leftover weapons and ordnance.

By the end of 1946 the task of demilitarising Japan required less effort and the role of the occupying forces was changing, with guard duties and training becoming the main focus.

James Wood, The forgotten force: the Australian military contribution to the occupation of Japan 1945–1952, Allen and Unwin, 1998