From soon after its acquisition by Britain during the Napoleonic wars, the southern tip of Africa had been shared between British colonies and independent republics of Dutch–Afrikaner settlers, known as Boers. In order to escape British rule many Boers had moved north and east to settle on new lands which eventually became the Boer republics of the Orange Free State and the Transvaal. The relationship between the British and the Boers was an uneasy one, with Britain extending its control by annexing Natal in 1845, although London did recognise the two republics in two treaties in the 1850s. Throughout the nineteenth century tensions were often high, and in 1880–81 the two sides fought a war in which the Boers inflicted several costly defeats on the British army. Coupled with the advent of a new government in London reluctant to fight the war, this ensured that the Transvaal was able effectively to maintain its independence.

The discovery of gold and diamonds in the Boer republics in the 1880s further intensified the rivalry, particularly as British subjects flooded into the Boer territories in search of wealth. The rights of British subjects in Boer territory, British imperial ambition, and the Boer desire for to stay outside the British Empire all caused more friction, which in 1899 provoked the Boers to attack in order to forestall what they saw as an impending British conquest.

Australians served mostly in mounted units formed in each colony before despatch, or in South Africa itself. The Australian contribution took the form of five waves. The first were the contingents raised by the Australian colonies in response to the outbreak of war in 1899, which often drew heavily on the men in the militia of the colonial forces. The second were the bushmen contingents, which were recruited from more diverse sources and paid for by public subscription or the military philanthropy of wealthy individuals. The third were the imperial bushmen contingents, which were raised in ways similar to the preceding contingents, but paid for by the imperial government in London. Then were then the draft contingents, which were raised by the state governments after Federation on behalf of the new Commonwealth Government, which was as yet unable to do so. Finally, after Federation, and close to the end of the war, the Australian Commonwealth Horse contingents were raised by the new federal government. These contingents fought in both the British counter-offensive of 1900, which resulted in the capture of the Boer capitals, and in the long, weary guerrilla phases of the war which lasted until 1902. Colonial troops were valued for their ability to shoot and ride, and in many ways performed well in the open war on the veldt. There were significant problems, however, with the relatively poor training of Australian officers, with contingents generally arriving without having undergone much training and being sent on campaign immediately. These and other problems faced many of the hastily raised contingents sent from around the empire, however, and were by no means restricted to those from Australia.

The Australians at home initially supported the war, but became disenchanted as the conflict dragged on, especially as the effects on Boer civilians became known. 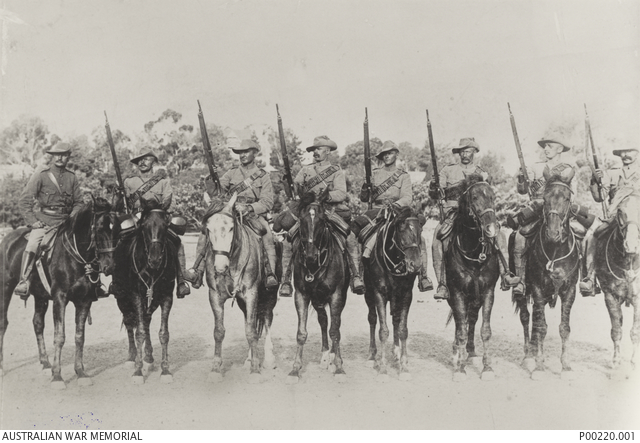 The conflict in South Africa is generally divided into three phases:

The outbreak of war had long been expected in both Britain and Australia. Believing that conflict was imminent, Queensland had offered troops in July, and the same month Britain had requested the participation of New South Wales and Victoria. Each of the colonies ultimately sent between four and six contingents. The first groups arrived in South Africa between November 1899 and March 1900; the second between December 1899 and February 1900; the third between April and May 1900; and the fourth between May and June 1900. The 4th Tasmanian, 6th Queensland, South Australian, and Western Australian contingents did not reach South Africa until March–April 1901. A further three contingents were raised by the new Commonwealth in 1901, but as they did not embark until 1902, most arrived too late for any action. Indeed, some were still at sea when the war ended on 31 May 1902.

The first Australian troops arrived in South Africa in December 1899, too late to become involved in the serious British defeats of “black week” (10–17 December), when 2,300 men were killed or wounded by the Boers in three separate engagements. Five hundred members of the Queensland Mounted Infantry and the NSW Lancers took part in the relief of Kimberley in February 1900, and men of the NSW Mounted Rifles played a minor part in the last major battle of the war, at Paardeberg, in the same month. After a series of defeats in 1900 the Boer armies became fragmented, forming groups of highly mobile commandos which harassed British troop movements and lines of supply. Faced with this type of warfare, the British commanders became increasingly reliant on mounted troops from Britain and the colonies.

Conditions for both soldiers and horses were harsh. Without time to acclimatise to the severe environment and in an army with a greatly over-strained logistic system, the horses fared badly. Many died, not just in battle but of disease, while others succumbed to exhaustion and starvation on the long treks across the veld. Quarantine regulations in Australia ensured that even those which did survive could not return home. In the early stages of the war Australian soldier losses were so high through illness that components of the first and second contingents ceased to exist as viable units after a few months of service. 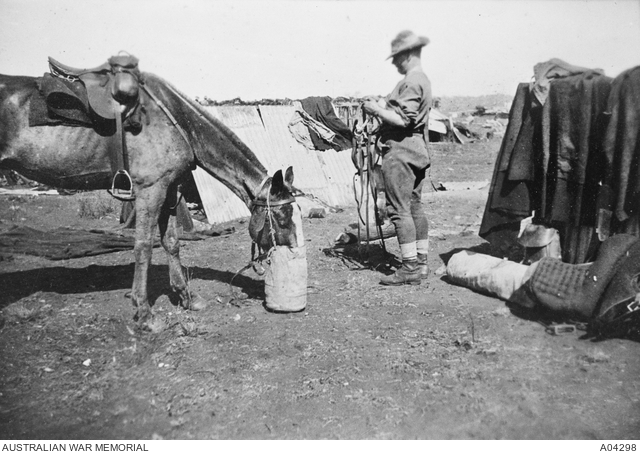 In the second phase of the war, when the British forces captured the major South African towns, over-extended supply lines and inadequate food caused problems. Looting was widespread, and did not stop at the acquisition of bare essentials for men and their horses. Disease and epidemics also took a heavy toll. In early 1900 water contaminated by corpses and human waste infected the army during a period of rest in the captured town of Bloemfontein; 1,000 deaths resulted, mostly from typhoid.

After September 1900, by which time the war had become mainly a guerrilla conflict, Australian troops were deployed in sweeping the countryside and enforcing the British policy of cutting the Boer guerrillas off from the support of their farms and families. This meant the destruction of Boer farms, the confiscation of horses, cattle and wagons, and the rounding up of the inhabitants, usually women and children. These civilian captives were taken to concentration camps where, weakened by malnutrition, thousands died of contagious diseases. By mid-1901 the war for the Australians was characterised by long rides, often at night, followed by an attack on a Boer farmhouse or encampment (laager) at dawn. The skirmishes were often minor, involving small Boer forces quickly overwhelmed by superior numbers. There were occasional fights between the Australians and larger Boer forces, but encounters with Boer commandos were rare.

The experience of the NSW Mounted Rifles in the last five months of 1901 was said to be typical: they trekked almost 3,000 kilometres and were involved in 13 skirmishes for the loss of five dead and 19 wounded. They reported killing 27 Boers, wounding 15 and capturing 196. The men spent long periods in the saddle with few opportunities to bathe or change their clothes; lice were a constant problem. Temperatures on the veld ranged from relentless heat during the day to freezing cold at night.

Members of E Company, 5th Contingent, Victorian Mounted Rifles, in action against the Boers in front of the Pongola Bosch, October 1901.

It is generally thought that about 16,000 Australians fought in the Boer War. This figure includes those who enlisted in an Australian unit, as well as the many raised locally, but it does not allow for double-counting of those who served in two contingents. A small number of Australians are known to have fought on the Boer side. The nature of the conditions under which the war was fought can be deduced from the fact that in the Australian contingents, 282 died in action or from wounds sustained in battle, while 286 died from disease and another 38 died of accident or other unknown causes. Six Australians received the Victoria Cross in South Africa, and many others received other decorations.