The battles for the island of Crete were fought from the second week of May 1941 when the island’s British, Commonwealth, and Greek garrison was attacked by German airbourne troops. The defender’s numerical superiority was eventually overwhelmed by the attacker’s massive advantage in logistic and air support. By the end May, organised resistance had broken down. Germans hunted small groups of Allied soldiers abandoned by inadequate evacuation facilities and desperately trying to evade capture.

German and Italian troops had overrun Greece in less than three weeks in April. As the Axis forces drove the Allies south through the Peloponnese, Allied command realised that Crete must become a target for German invasion. From Crete, Axis naval and air forces would dominate the eastern Mediterranean.

Around ANZAC Day 1941 Allied forces withdrew from Greece. Some were evacuated to Alexandria but most got only as far as Crete and were used to reinforce the garrison. These troops were battle weary and many had left their equipment behind. The stocks of munitions and materiel on the island were inadequate to resupply them. Poorly-armed and with minimal or no air or naval support, the soldiers faced an enemy fresh from victories across Europe. 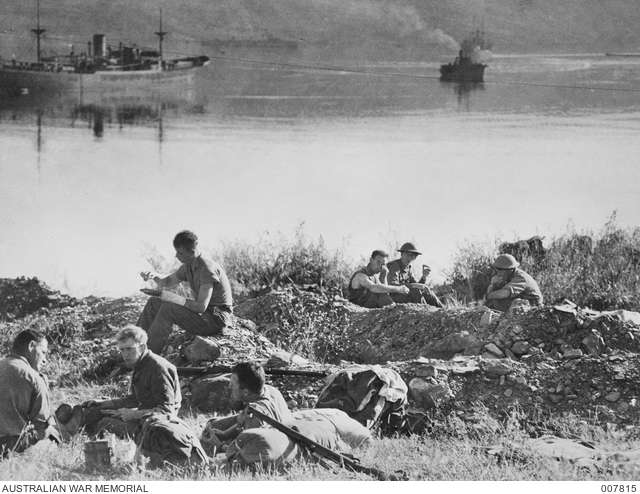 Troops on the shore of Suda Bay awaiting evacuation, April 1941.

One of those evacuated from Greece to Crete was Bernard Freyberg, general commanding the New Zealand Division in the Mediterranean. He expected to stay briefly on the island and then reunite his division in Egypt. Instead, he was given command of the garrison and told to prepare the defence of the island against an expected air and sea invasion.

Freyberg deployed his forces around the three main population centres on the island's north coast. These had airfields or ports that would be vital to an enemy intending to capture Crete. The largest defended area was in the west, stretching from the airfield at Maleme to the ports at Canea and Suda. New Zealanders held this area, with Australian, British, and Greek units in support. In the centre of the north coast British units, with some Australian and Greek forces, held the capital of Heraklion. Between these two forces, four Australian battalions and a field regiment (artillery) held the area from Georgiopolis to Retimo (Rethymnon), supported by three battalion-strength Greek regiments and local police.

Without air support, Freyberg ordered his men to make maximum use of camouflage and to be ready to counter-attack against any attempted landing. By mid-May the German Air Force intensified its bombing and strafing of the island, warning the garrison of imminent attack.

The invasion of Crete began the morning of May 20. Ralph Honner, at the time a company commander with the 2/11th Battalion, described the arrival of the Germans, as seen from his vantage point under the olive trees east of Retimo:

[It was] a spectacle that might have belonged to a war between the planets. Out of the unswerving flying fleet came tumbling lines of little dolls, sprouting silken mushrooms that stayed and steadied them, and lowered them in ordered ranks into our consuming fire. And still they came, till all the fantastic sky before us was filled with futuristic snowflakes floating beneath the low black thundercloud of the processional planes - occasionally flashing into fire as if struck by lightning from the earth.

These "little dolls" – German paratroopers of General Kurt Student’s XI Air Corps – were highly trained and motivated. For ten days they, and the elite mountain troops that were sent to reinforce them, hunted and were hunted by Australian, New Zealand, British, and Greek soldiers, as well as Cretan farmers, townspeople, and police. Fighting was savage and bloody, with little quarter given. Men fought to the death in solitary duels or major engagements; their bodies cluttered the narrow streets of the towns or lay among the olive trees and creek beds of the countryside. Forty years later, Ted Randolf of the 2/7th Field Ambulance remembered: "A sickly, sweet smell drifted through the area getting stronger until one could taste it in the mouth. The smell was of the dead. I can still taste it. Once it is with you, you never forget it!" 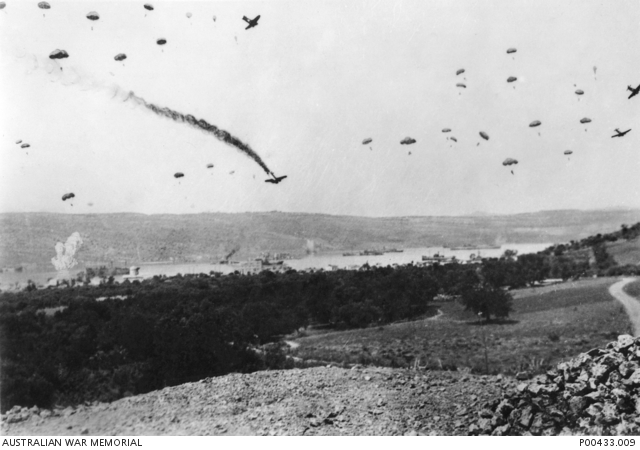 German parachute troops of the XI Air Corps, over Suda Bay during the airborne attack on Crete, May 1941. One of the glider planes is on fire and about to crash, while another has part of its fuselage shot away. Heavy casualties were inflicted on the paratroopers.

The German parachute assault groups targeted the three areas predicted by Freyberg and his commanders. They began landing at the airfield at Maleme at dawn. By mid-afternoon both the airfield at Heraklion and the airstrip at Retimo were under attack.

In the countryside and villages of the Heraklion and Retimo sectors, the Germans were driven from their objectives. The Allies denied the airfields to the enemy but were cut off from each other as they fought bitter battles on their flanks. At Maleme, the Germans captured the airfield and flew in desperately needed reinforcements. Over the next week they drove the Allies east to defensive positions around Suda, capturing the port at Canea on the way.

By 26 May Freyberg reported that his position was hopeless and his men had reached their limit: food and ammunition was in short supply, they had no motor transport, and communications were sporadic at best. The three forces established to defend the sectors around the airfields could not support each other. The German Air Force had unchallenged mastery of the skies and dominated the battlefields during daylight hours. Retreat and evacuation was the garrison’s only option. The troops around Suda began to withdrawal across the island to Sfakia on the south coast. On 29 May the Allies abandoned Heraklion. Successfully evacuated from the ancient port, many lost their lives when the convoy was attacked by air. At Retimo, the West Australians of the 2/11th and the New South Welshmen of the 2/1st Battalions, still fighting to deny the airstrip to the Germans, were cut off. 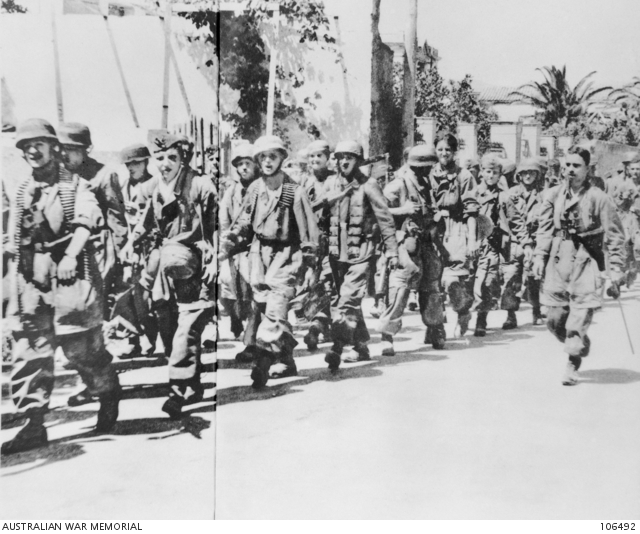 Soldiers march into Canea (Hania) after seven days of severe fighting, 27 May 1941.

From 29 May to 1 June the Royal Navy evacuated around 10,000 Allied soldiers from Sfakia. They did not have the ships to take more and the Victorian 2/7th Battalion, after fighting so gallantly at 42nd Street near Suda, was left behind. Without food or ammunition, they faced capture.

By 30 May Lieutenant Colonel Ian Campbell, commanding officer of the 2/1st Battalion and Retimo Force commander, decided further resistance at Retimo was pointless and ordered his men to surrender. Major Sandover, leading the 2/11th Battalion, offered his men the choice of surrender or escape. Many took the latter option, evading capture for several months living in the mountains with assistance from the local population. Locals helping Allied soldiers risked death if discovered. Between June and September approximately 600 Allied soldiers escaped the island of Crete; almost one in ten of the escapees were from the 2/11th Battalion. Their stories provide a fitting sequel to the journey of Odysseus.

Crete remained occupied by Axis forces to the end of the war.

Unit histories of the New Zealand units that served on Crete were published in the 1950s and 1960s by the War History Branch, New Zealand, as part of the Official history of New Zealand in the Second World War 1939–45

Department of Veterans' Affairs information about memorials on Greece and Crete

More about the Second World War