Three months after the attack on Pearl Harbor, the Japanese occupation of south-east Asia reached its southern limit with the invasion of Timor on 20 February 1942. At the time the island was divided between two colonial powers, the Dutch in the west and the Portuguese in the east. As early as February 1941 Australia had agreed with Dutch and British officials that Allied troops, under Australia's command, would reinforce Timor should Japan enter the war. Thus "Sparrow Force", as the Allied presence on Timor was known, landed on the island five days after the Japanese attack on Pearl Harbor. This was part of a strategy of seeking to defend forward airfields and also involved deploying "Lark Force" at Rabaul and "Gull Force" at Ambon.

Although agreeing to garrison Timor with troops, Allied commanders did not envisage a large-scale Japanese attack on the island. Nor did they have the agreement of the Portuguese to occupy the eastern part of the island; the colonial administration took the "extravagantly optimistic view" that Japanese forces would respect Portuguese neutrality. (Koepang) Kupang, the centre of Dutch rule, was the focus of the Japanese attack. Facing them were troops from the Australian 2/40th Battalion, a squadron of Royal Australian Air Force (RAAF) Hudson bombers, a battery of Australian coast artillery, and 1,000 Dutch troops. Surrounded and short of ammunition, they held out for four days but were forced to surrender on 23 February. A Japanese force had also been sent against Dili, the Portuguese capital, where it faced only limited resistance, but, importantly, forstalled the planned arrival of Portuguese troops between 19 and 20 February. A further 250 men of the Australian 2/2nd Independent Company had been sent to the Portuguese part of the island before the Japanese attack. They did not directly oppose the invasion but acted as a guerrilla force. After the surrender of the main Allied force around Koepang, 140 members of the 2/40th and some Dutch troops were able to avoid the encirclement; some were handed to the Japanese by West Timorese, while the remainder made their way across the island to join the 2/2nd.

Timor's rugged terrain offered ideal conditions for guerrilla warfare, but the early success of these operations was made possible by the support of the Timorese people, who provided food and shelter, ponies for carrying heavy equipment, acted as porters and guides, and helped set up ambushes. Some took up arms themselves and fought alongside the Australians. Many Timorese were executed by the Japanese for providing assistance to the guerrillas. Assistance also came from the Portuguese who, as representatives of a neutral country, had been allowed to maintain order in their colony.

Maintaining a supply line to the Australians on Timor was always difficult. On 27 May 1942 the Royal Australian Navy (RAN) began what was to become a regular run from Darwin to Timor to resupply and reinforce the troops. It was during the landing of the 2/4th Independent Company at Betano on 23 September 1942 that HMAS Voyager went fast aground and was attacked by Japanese aircraft. The vessel had to be destroyed. On 1 December 1942 HMAS Armidale was sunk by Japanese air attacks while attempting to land Dutch troops as part of an operation to relieve the 2/2nd. Vessels of the RAN and the Dutch Navy ran the gauntlet of Japanese bombers throughout the period of Australian operations on Timor.

From July 1942 the Japanese launched a series of operations to destroy the Australians and their Timorese allies. Around this time the 2/2nd received reinforcements from Australia in the form of the 2/4th Independent Company; Australian troops on the island now numbered about 700. The Japanese had also increased the size of their garrison and, recognising the extent to which the Australians depended on the help of the Timorese people, sought to take advantage of divisions among the local inhabitants. Timorese from the Dutch colony were brought over to convince those in the east to break ties with the Australians. Japanese attempts to cause discord between the Timorese and the Portuguese administration also worked to the detriment of the Australians. By October Portuguese control had been largely eliminated, and in November the Japanese ordered the internment of all Portuguese on the island.

During November 1942, the United States Army Air Force (USAAF) and the RAAF offered some respite to the Australians on Timor. Marauder and Beaufighter aircraft became available for attacks on Japanese positions and shipping, supplementing the small number of RAAF Hudsons that had soldiered on since the beginning of the campaign.

As Japanese pressure increased, guerrilla operations became more difficult. The intelligence provided by local people began to dry up and, from the beginning of December 1942, operations were wound down. Early that month the 2/2nd evacuated 190 Dutch troops and 150 Portuguese, who sought refuge in Australia, before leaving the island between 10 and 16 December. After their departure, the position of the 2/4th became untenable and it too was evacuated on the night of 9–10 January 1943, lifted by HMAS Arunta. The "Z" Lancer group, from Special Operations Australia, left Timor on 10 February 1943, picked up by the submarine USS Gudgeon.

After that date Australian commandos from "Z" Special Unit and Australian-trained Timorese continued to land in Timor under the aegis of the Services Reconnaissance Department. Operations were compromised when the Japanese captured the first party and recovered its code books. Using the captured codes the Japanese were able to decieve Australian authorities into believing that the commandos had successfully established themselves. They were also able to arrange for stores to be dropped and successive groups of commandos landed. They were quickly captured and any Timorese suspected of assisting those who tried to avoid capture were punished.

Apart from the activities of "Z" Special Unit, Australian operations in Timor lasted just under a year. Although of little positive strategic value, the operations demonstrated the effectiveness of guerrilla warfare tactics against the Japanese. It was also a matter of morale; even in the face of apparent Japanese ascendancy, Australian troops fought on.

Propaganda leaflets produced by FELO (Far East Liaison Office) and dropped on Portuguese Timor late in the Second World War. They assure the Timorese that Australians are their friends and that Allied forces are coming to recapture the country from the Japanese. 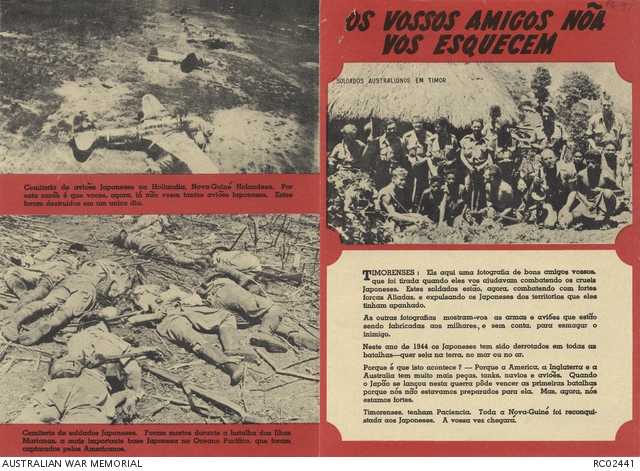 OS VOSSOS AMIGOS NOA VOS ESQUECEM (Your friends do not forget you). A propaganda leaflet produced by FELO (Far East Liaison Office) and dropped on Portuguese Timor late in the Second World War.