Remembering 1942: The end of the Kokoda campaign

On this day in 1942 Australian troops were closing on Kokoda, the village on the northern side of the Owen Stanley Range which gave its name to one of the epic battles of the war in the Pacific. The place was actually retaken a day later, on 2 November, but it is fitting that today we recall and pay tribute to the service and sacrifice of those troops who took part in the bitter fighting that occurred along the whole of the Kokoda Trail.

It was more than three months earlier, on 21-22 July, that a Japanese force landed near Gona on the north coast of Papua, with orders to reconnoitre the feasibility of using a route over the mountains to launch an attack on the major Allied base at Port Moresby, on the south coast. Within a short time this force had been substantially reinforced to mount a full-scale offensive, the intention being to support it with an amphibious landing at the eastern tip of Papua – a plan which gave rise to another major battle around Milne Bay in August-September.

Initially, the Japanese advance inland made rapid progress against light Australian resistance. Opposing the Japanese was "Maroubra Force", comprising the 300-strong Papuan Infantry Battalion and an Australian militia unit, the 39th Battalion. Patrols clashed at Awala on 23 July before the defenders fell back on Kokoda, which itself came under attack five days later. The Australians were forced out during the early hours of the following morning, following the death in action of the 39th's commander, Lieutenant Colonel W. T. Owen. (His name is recorded on panel 68 of the Roll of Honour).

On 8 August Owen's replacement, Major Alan Cameron, returned at the head of 480 men to attempt to retake the place. Outnumbered and short of ammunition, they were again forced to relinquish control after two days of fighting and fell back along the jungle track leading south up into the mountains, to the next native village called Deniki. After beating off several Japanese attempts to eject them from this position too, eventually on 14 August the 39th Battalion and the Papuan Infantry began to fall back again, this time to Isurava.

For nearly two weeks the Japanese did not heavily press the Australians. During this time the 39th Battalion was joined by another militia unit, the 53rd Battalion, and the headquarters of the 30th Brigade under Brigadier Selwyn Porter. On 23 August part of the seasoned AIF 7th Division had also reached the forward area. This was the 21st Brigade led by Brigadier Arnold Potts, and comprised another two battalions (the 2/14th and 2/16th) numbering a little more than 1000 men in total. Command of Maroubra Force now fell to Potts. 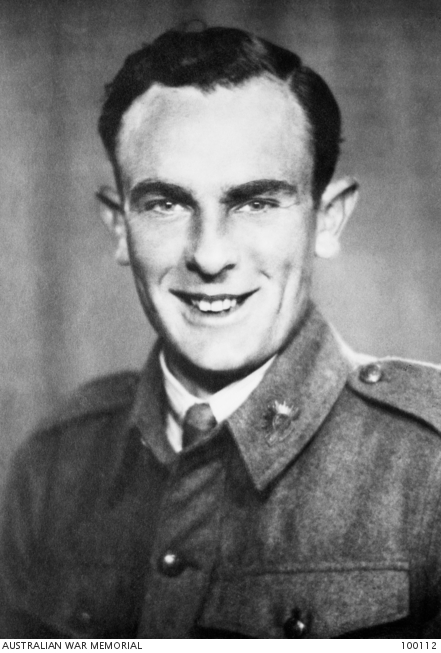 When the Japanese resumed their advance on 26 August – the same day that Japanese marines went ashore at Milne Bay – Potts was forced to mount a desperate and difficult fighting withdrawal aimed at denying ground and causing maximum delay to the enemy. During the fourth consecutive day of fighting at Isurava, Private Bruce Kingsbury led a gallant counter-attack against a breach in the Australian perimeter which earned him the Victoria Cross - the first won on Australian soil (which Papua then was). Sadly, this gallant soldier fell to a sniper's bullet during his charge and his award was a posthumous one. (He, too, is recorded on the Roll of Honour, on panel 38.)

Potts and his men fell back first to Eora Creek on 30 August, then Templeton's Crossing on 2 September, and Efogi three days later. As one writer has described it: "From 31 August to 15 September the Australians, against vastly superior numbers, fought a decisive military game of cat and mouse along the track. Company by company, platoon by platoon, section by section, they defended until their comrades passed through their lines, broke off contact sometimes 20 to 30 metres from the enemy and repeated the procedure again and again down the track."

Throughout this fighting, Australian resistance was increasing in strength and becoming better organised while the Japanese were showing signs of feeling the strain of their own lengthening supply line. Both sides, however, were beginning to suffer the effects of reduced effectiveness caused by exhaustion and sickness entailed by operating over such harsh terrain. Moreover, the Australian build-up, while still relatively modest, proved impossible to sustain via the only supply line stretching over the mountains, which depended on native carriers to manhandle rations and ammunition forward, and to evacuate the sick and wounded to the rear. The commander of 1st Australian Corps at Port Moresby, Lieutenant General Sydney Rowell, accordingly decided to withdraw the tired 39th Battalion on 5 September to relieve the problem.

After another hard-fought stand at Brigade Hill between 8 and 10 September, Potts handed over command to Brigadier Porter, who decided on a further withdrawal to Ioribaiwa. Here the Japanese attacked next day but made little progress. In fact, severe fighting continued around Ioribaiwa for a week. But the Japanese advance was losing impetus, while the Australian defence was gaining in strength through the arrival of more units of the 7th Division. Command of the forward area passed to Brigadier Ken Eather, leading the 25th Brigade, AIF, on 14 September. In addition to its normal battalions (2/25th, 2/31st and 2/33rd), that brigade also had attached the 3rd Battalion and the 2/1st Pioneer Battalion – a total of 2,500 combat troops.

It was to continue his defence from the strongest available ground that Eather chose to withdraw to Imita Ridge on 17 September. Although this was the last effective barrier preventing a march on Port Moresby, the limits of the enemy advance had actually already been reached by this stage. Supply lines had been stretched beyond breaking point, leaving many Japanese troops starving and unsupported, and other events were intervening – principally the reverse suffered by Japanese forces fighting American marines at Guadalacanal in the southern Solomon Islands. As early as 18 September it had become clear to the Japanese commander at Rabaul, Lieutenant General Hyakutake Harukichi, that the gamble he had taken with an overland advance in Papua had failed. By then Guadalcanal was an area of higher priority to which other effort had to be diverted.

After the local Japanese commander, Major General Horii Tomitaro, received orders to establish a primary defensive position around his landing bases on the north coast, he began withdrawing on 24 September. The Australians were able to follow up the retreating Japanese, reversing the path they had been forced to follow during the enemy advance. It was a phase in the fighting which reached its triumphant culmination on 2 November, with the re-occupation of Kokoda.

From there Australian and American forces pressed on northwards to seize Popondetta, which became the main forward base for a long drawn out and costly campaign to eject the Japanese from their coastal strongholds at Buna, Gona and Sanananda. But that, as the saying goes, is another story.

The Kokoda Trail had taken a heavy toll of the men on both sides who were engaged in the fighting. More than 600 Australian lives had been lost, and over a thousand sustained wounds in battle; perhaps as many as three times the number of combat casualties had fallen ill during the campaign. Losses among the Japanese had been equally severe, with somewhere around 75 per cent of the 6,000 troops engaged being accounted for as sick, wounded or killed. By the time the last enemy bastions at the end of the overland route fell on 22 January 1943, the lives of more than 12,500 Japanese would be lost.

Professor David Horner, one of Australia's leading historians of this campaign, has observed that:

It is ironic that many of the reasons for this tragedy are similar to those that caused suffering and death to the Australians (although not on the same scale). Neither side appreciated the debilitating effect of terrain, vegetation, heat, humidity, cold (at higher altitudes) and disease while operating in the Owen Stanley Range.

As we reflect back after an interval of 60 years, it would be easy to overlook both the dimension and importance of these events. It is especially deserving of note that the brunt of the initial fighting fell, on the Australian side, to ill-equipped and poorly-trained young soldiers – many of them 18-year-olds who had never fired a rifle in anger – who were often outnumbered perhaps five-to-one; moreover, their Japanese adversaries, veterans of China, Guam and Rabaul, were equipped with heavy machine-guns, mortars and mountain guns – weapons which the Australians lacked. It is for this reason that the Kokoda Trail is rightly remembered as a high point in Australian history. Along with Milne Bay, the Kokoda campaign remains the most important ever fought by Australians to ensure the direct security of Australia.

The campaign was also notable because so much misunderstanding existed back in Australia at the time about what was actually happening along the Trail. While the Australian defenders were steadily falling back before the advancing Japanese, their's was no abject retreat but a tenacious, uncompromising and measured withdrawal – a fact which General Douglas MacArthur and his senior officers failed to appreciate or acknowledge. Sackings of commanders alleged to have failed to hold or reverse a situation which was much more difficult than armchair strategists could possibly realise, and slurs about men running like rabbits, paid no regard to the true magnitude of the performance and achievement of the troops on the Trail.

These days, however, the name Kokoda strikes a responsive chord with ordinary Australians, and it is recognised and appreciated that the hardy men who fought so bravely during the dark months of 1942 – especially those men whose names appear on the walls behind me here – won a major victory, turning the tide of Japanese successes to that time, and securing the Australian homeland from the threat of sustained or serious attack. We remember them all with respect and pride.