Remembering the battle of Milne Bay 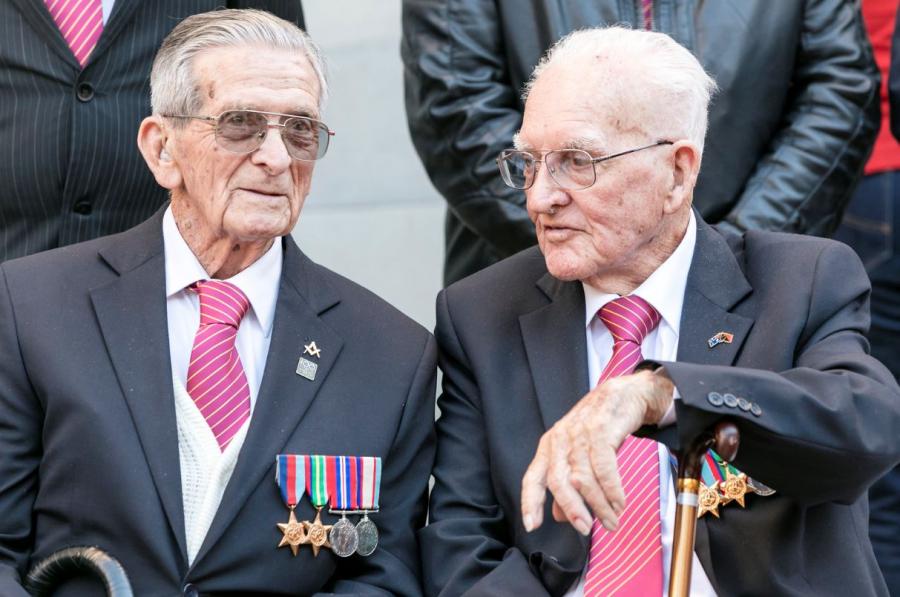 Veterans Ted Bousen and Bill Hansen attended commemorations at the Memorial to mark the 75th anniversary of the battle of Milne Bay.

When Bill Hansen arrived at Milne Bay, less than a week before the Japanese attacked 75 years ago, he thought it was one of the worst places on earth. But it was here that he forged a friendship that would last a lifetime.

“It was absolutely shocking,” the 93-year-old said. “It was wet and muddy, and we had mud above our boots. One bloke we had with us worked for the weather bureau and he reckoned we were getting a foot of rain a day. That’s 300mm, and I never doubted him. No, it wasn’t good at all … but it was sort of the beginning of the end of the war really.”

Located on the south-eastern tip of Papua, and with a sheltered harbour and three airstrips, Milne Bay was a key stepping stone in the Japanese drive to Port Moresby. Late on the night of 25 August 1942, 2,000 Japanese marines landed to capture Milne Bay, which was defended by a force of almost 9,000 Allied troops, including two Australian infantry brigades (the 7th and the 18th), and 75 and 76 Squadrons from the RAAF, both equipped with P-40 fighter bombers. The battle that followed was a turning point in the Pacific war, and was the first time that Allied forces decisively defeated a Japanese offensive on land.

In some of the worst conditions faced by Australians in the Second World War, Milne Bay was fought through incessant rain, ankle-deep mud, and malaria-ridden swamps.

“Someone said if you got malaria, you were as good as dead,” Hansen said. “But I had it six times and I didn’t die.”

Hansen was an 18-year-old shoe salesman from Perth when he joined the army in April 1942, becoming a signalman.

“I was in the signals unit, so we weren’t there to kill the Japs, we were just there to make sure they didn’t kill us,” Hansen said. “I knew some Morse code and I could send and I could receive a little bit, but I knew I wasn’t as good as I should have been. None of us were really. We were working hard, but you know, everything turns out all right in the long run, I suppose.”

It was in the army that he met his life-long friend and future brother-in-law Clive Briggs.

“I met a bloke on the first or second day in the army, and we were together nearly all the time, and he ended up marrying my sister,” Hansen said.

“He got crook, and was sent home, and after he got over his malaria, he went into a convalescence camp at Cottesloe in Perth, which was only about a 10-minute walk away from where I lived. He used to have a good meal with my parents and sit down and write a letter and tell me about it.

“My mum was a damn good cook, and that was the first time I was away from home, so to go from good meals and everything else to bully beef and dog biscuits for weeks and weeks, well, it wasn’t good.”

For 97-year-old Ted Bousen, the memories of Milne Bay remain strong. “Once you start talking about these things, it all comes back,” said Bousen. He was in the building trade when he volunteered in March 1941 in Toowoomba in Queensland. On 28 August 1942, he embarked for service with the 61st Australian Infantry Battalion on the MV Anshun before serving at Milne Bay.

“The boat we were on was a Chinese cattle boat, the Anshun, and it stunk to high heaven,” Bousen said. “Of course, there were hundreds of us on it, and my name started with B, so I was below sea level and that wasn’t a very nice feeling knowing there were submarines around. But we got there, and I’m still here and that’s the main thing.”

He remembers one close call in particular.

“When they sunk the Anshun, we happened to be under a tarpaulin near the wharf,” Bousen said. “In the shelling one of the shells landed in the mud right in front of me, but it was a dud and didn’t explode, so I’m still here, otherwise I wouldn’t have been. And that was just the start of it of course.”

The Memorial has opened a new display in Anzac Hall to commemorate the 75th anniversary of the battle. It features a Japanese Type 95 Ha-Go Light Tank, as well as art, photographs, and artefacts from the Memorial’s collection, many of which have never before been on public display. The display is in addition to the permanent Milne Bay display in Aircraft Hall which features a RAAF P-40 Kittyhawk “Polly” flown during the battle.

One of Australia’s leading historians Emeritus Professor David Horner of the Australian National University will deliver a special War Studies Seminar titled Remembering the 75th anniversary of the battle of Milne Bay on the evening of August 31. Bookings essential.