A nation of memorials 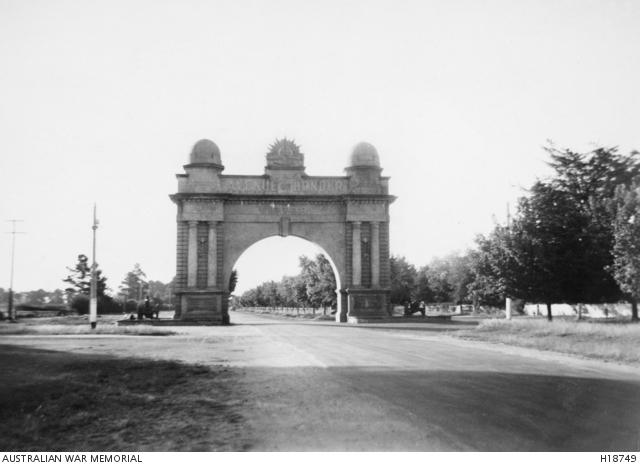 Ballarat's Arch of Victory was built as a grand entrance to the city's Avenue of Honour.

They’ve been described as some of Australia’s most ‘sacred places’ and can be found in cities and towns around the country.

From modest memorial plaques and honour rolls to grand museums and monuments, war memorials were erected to mark Australia’s participation in the First World War and commemorate those who had died.

Described as “the war to end all wars”, the First World War took a toll on communities around the country, leaving behind a legacy that would ripple through the generations.

Barely a family or community was left untouched, and when the war finally ended after the signing of the Armistice on 11 November 1918, communities in nearly every Australian city and town erected memorials to honour their dead and recognise the service and sacrifice of those who had served their country.

These memorials now feature on the Places of Pride website, a National Register of War Memorials which aims to record the locations and images of every publicly accessible memorial in Australia, from cenotaphs, honour boards, and church shrines to memorial halls, pools, bowling clubs and tree-lined remembrance ways. 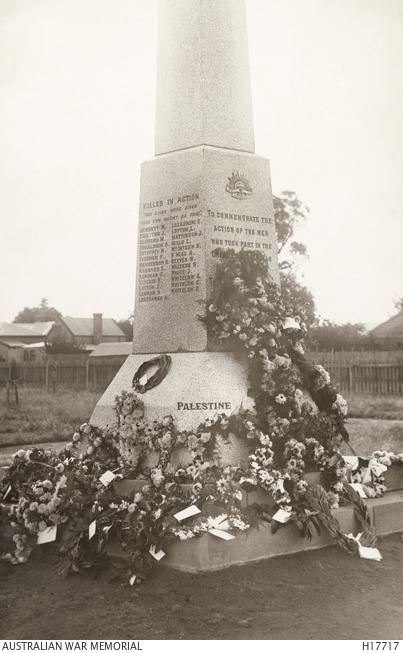 A First World War memorial after an Anzac Day ceremony.

Historian Dr Meleah Hampton said there was a sense of civic pride that Australia had participated in the Great War and been victorious, but there was also a sense of duty to ensure the men and women who served were remembered.

“There are memorials to individuals, where people buy gates or a window in church, and smaller memorials to specific causes, but it’s not until after the return of the soldiers and the conclusion of the war, that really serious thought went into having your own town’s memorial.

“The year 1918 sees a great deal of war weariness. It’s gone on for a really long time, and immediately after the armistice, there’s a great deal of celebration, or at least joy that it’s over, and that it’s been a success, but there’s also great sadness and a long period of returning the boys home.

“The process of returning the combatants home to Australia and New Zealand, Canada, America, and even just from France to England, is straining the entire world’s transport capacity, and there’s is a real rebuilding process.

“Suddenly the men are home, but there’s a few missing … and it’s hard. It’s a hard period for everybody…

“Everybody has lost somebody, and it’s not necessarily a family member. In many cases, of course, it is a family member – a couple of brothers and a cousin, so some families really suffer – but in other cases, it might be that your kids’ school teacher was killed, or the doctor’s son, but you know of someone who has lost someone. Someone is missing from your town.” 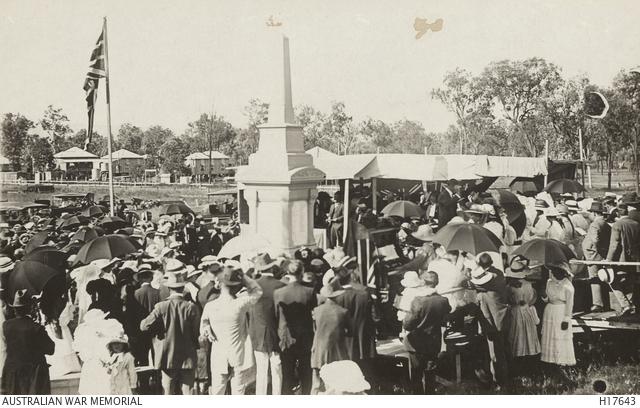 The unveiling of a First World War Memorial in Toogoolawah, Queensland.

For families and communities that had been deeply scarred by war, the memorials were an important way of expressing their grief. For many, they took on special significance, often becoming surrogate graves for soldiers whose bodies were buried in war cemeteries in foreign lands or were missing.

“We come from an Anglo tradition of memorialising people through tombstones or plaques in schools or churches, so it’s not a new thing to want to memorialise an individual or for a family to want to have someone remembered,” Dr Hampton said.

“But when the war is happening, there is another impetus – the other thing that is really pushing people to create these memorials – and that’s the lack of graves…

“An important part of grief in the early 20th century – and in the 100 years before – is to visit the grave. You maintain a grave, you visit it regularly, and you put flowers on it, but all of these men are dying overseas, and parents can never see their graves …

“It’s important enough that the army undertakes a program to send photographs of gravestones home to families, but it is also something that is unfulfilling for the families at home, and memorials, in part, are fulfilling that need for a place of reflection or remembrance.

“For some people it was really vital to find that grave overseas, but for some people, they accept it and take what they are given – a photograph of a grave – but in the worst case scenario, there is never a grave, and it’s just a name on a memorial.” 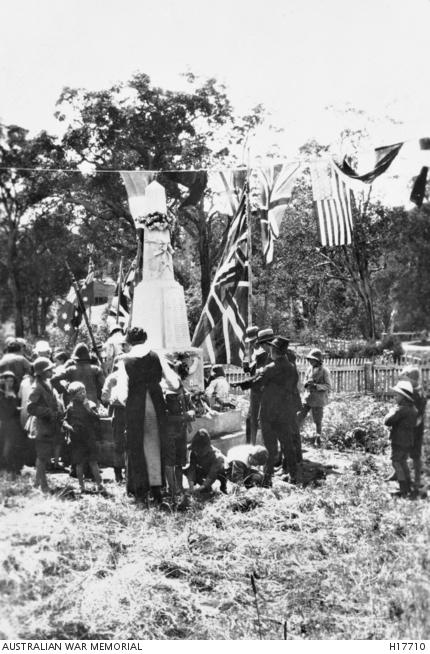 An Armistice Day ceremony in progress at the First World War Memorial in Nannup, Western Australia.

Memorials were soon being erected in prominent civic areas such as town squares, parks and gardens, or central avenues and intersections.

“It’s a grass roots thing,” Dr Hampton said. “Nobody is saying, ‘We must have memorials, please towns build your memorials,’ but there’s a lot of talk of it early on, and it really gains traction in the post-war years ... There is no pot of money to go to, so it’s really the people in the town behind it. You have to fundraise yourself amongst your own constituents, you have to put the money together, and you have to have your own committee to make your own design decisions, and then erect your own memorial.”

Memorials took on a multitude of forms, ranging from cenotaphs and obelisks to statues and pillars. Ornamental structures, such as windows, flagpoles, gates or arches, were also popular, as were memorial buildings, such as halls, schools and pools, and remembrance drives and building projects such as the Great Ocean Road in Victoria.

“There is no standard thing, it can be anything,” Dr Hampton said. “The people of Ballarat, for example, thought, what can we do that would best express our feelings … and that beautiful avenue of trees is what they came up with.” 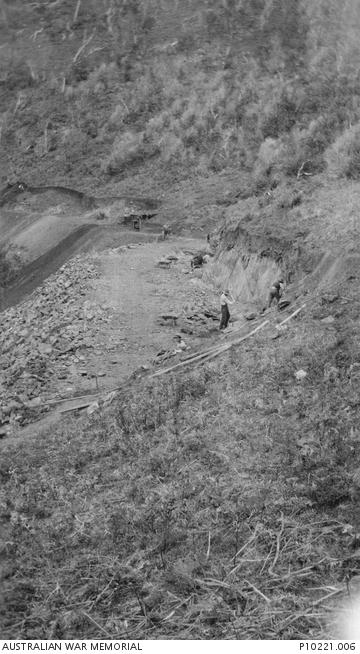 Diggers constructing the Great Ocean Road, which was built as a tribute to soldiers of the First World War. Surveying of the road commenced in August 1918 and construction in 1919. Thousands of veterans were employed for the construction, using picks, shovels and horse-drawn carts. The road was officially opened on 26 November 1932.

More than 90 per cent of local war memorials included a list of names, but the criteria for the inclusion of names often varied. Sometimes only those who were born in or enlisted in the town were included, while others listed those who were living or working in the town when they enlisted, or even those who became associated with the town after their military service.

“The memorials in a lot of respects are not just for the dead, they are to commemorate a town’s contribution to a victory in a ‘great war’,” Dr Hampton said.

“Particularly in the early post war years and the 1920s, there was a strong sense that this was a great victory against a very bad enemy that needed to be defeated, so they are recording their participation in a global conflict with pride...

“Some have really set ideas about who to put on their memorials, so some just have those who died, but lots, if not most, have everyone from the town who participated.”

More than 100 years after the war ended, these memorials continue to be an important focus for Anzac Day and Remembrance Day ceremonies around the country.

“The important thing to remember is that there is a sense of pride behind these memorials, it’s not just sorrow and loss,” Dr Hampton said. “There is civic pride in Orange having something to do in the war, and they are a real voice of what society was and what that town was...” 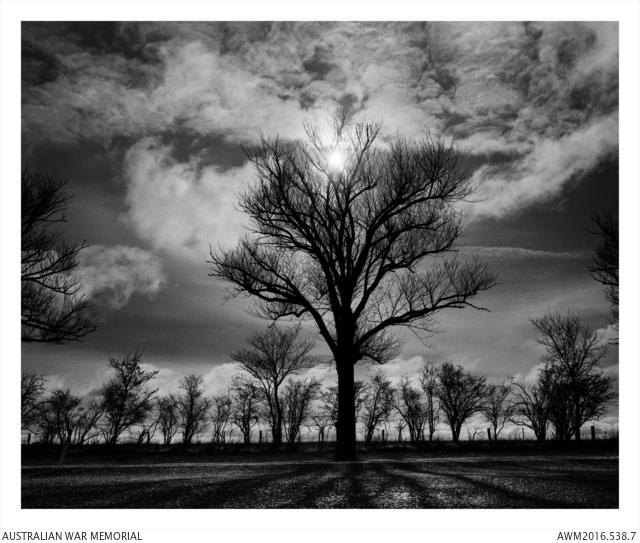 Photograph of the tree planted on the Avenue of Honour in Ballarat in recognition of the service of 2122 Gunner Leonard Joseph Willis, 3rd Field Artillery Brigade. This photograph is from a series of 22 images taken by Trent Parke titled WWI Avenue of Honour. 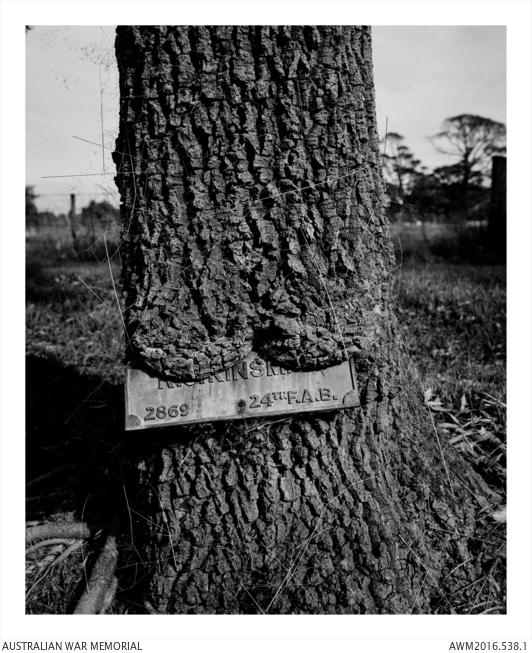 Photograph of the tree planted on the Avenue of Honour in Ballarat in recognition of the service of 34405 Gunner Joseph Roy Kinsman, 24th Field Artillery Brigade. This photograph is from a series of 22 images taken by Trent Parke titled WWI Avenue of Honour.