'Captain, nothing you can say will remove the conviction that I will be killed' 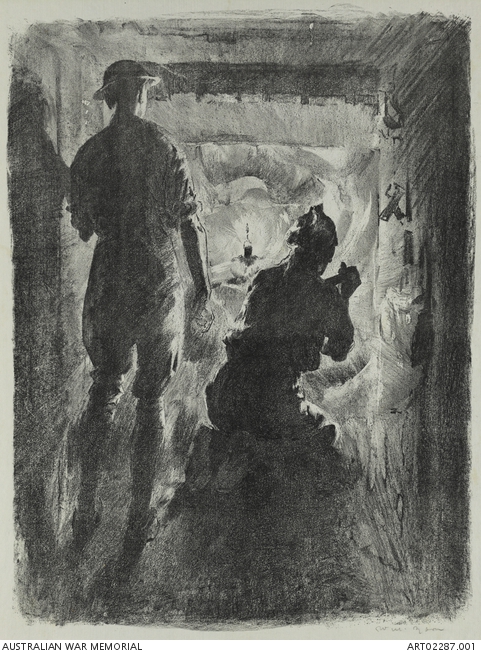 Will Dyson's With the 2nd Australian tunnellers near Nieuport.

Albert Davey had a feeling he was about to die.

The 32-year-old miner from Ballarat, Victoria, had left his wife and child to serve with the 1st Australian Tunnelling Company on the Western Front during the First World War.

The tunnelling company is best known for its work in mid-1917, when its men dug under the German lines at Hill 60 in Belgium and detonated huge mines, blowing the enemy sky-high during the battle of Messines.

Just over a year later the war was almost over; but Corporal Davey couldn’t shake the feeling that he was about to be killed and that he would never see his wife and child again.

On 3 November 1918, his section was moving forward to build a tank bridge in support of a British assault on the Sambre–Oise Canal in northern France.

That morning, Davey went to see his commanding officer, Captain Oliver Holmes Woodward, and told him he was convinced he was going to die.

Woodward dismissed his concerns as foolish and told him not to worry. 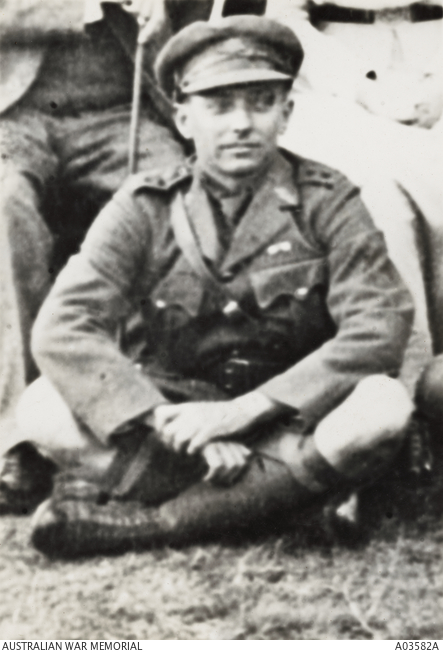 “I had often heard cases cited of men having a premonition of impending disaster and will tell you of a case which actually came to my notice,” Woodward later wrote in his recollections of the war.

“Just prior to leaving our bivouac Camp on Sunday morning … Corporal Davies, one of my best NCOs, came to me and asked whether I would take care of his personal belongings and post them to his wife should anything happen to him.

“I was feeling rather despondent myself and Corporal Davies’ outlook on the future did not help to cheer me up. I spoke firmly to him, told him not to be foolish …

“We all stood that chance, and we had to keep cool and collected.

“He replied, ‘Captain, nothing you can say will remove the conviction that I will be killed. Will you please do me the favour I ask?’

“Merely to ease his mind I consented and took charge of his personal effects.

“Before daylight broke next morning, Corporal Davies had made the supreme sacrifice, and had gone west.

“He was killed by a shell while we were lying out waiting for Zero.

“This incident left me somewhat dazed and greatly impressed.

“In temperament Corporal Davies was of the calm type, he was a soldier who was as fearless as any soldier can truly be in war, had never failed in carrying out his duties in a most efficient manner, and inspired the confidence of his men.

“There could be no suggestion of fear or panic causing him to act as he did in coming to me.” 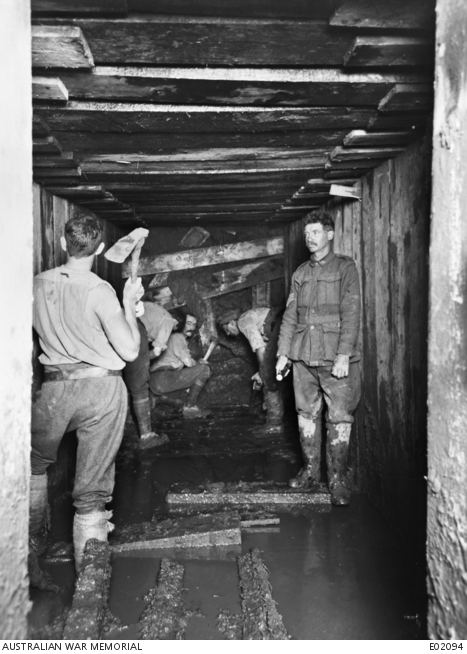 Miners of the 1st Australian Tunnelling Company excavating dug-outs, 25 feet below the surface, in the Ypres sector. 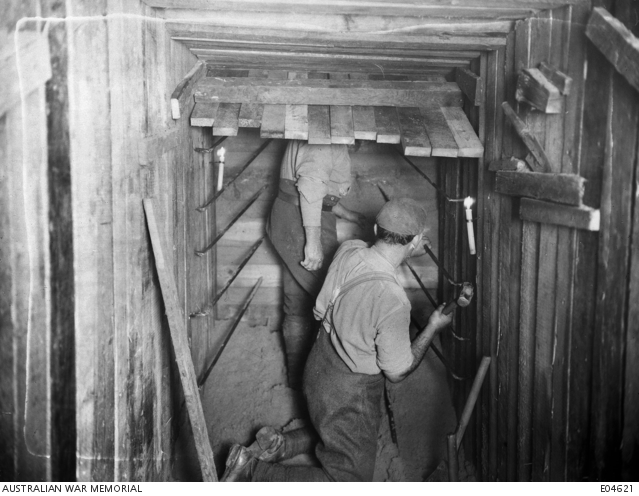 Members of the 2nd Australian Tunnelling Company working by candlelight on a tunnel.

Davey was killed alongside his fellow tunnellers, Arthur Johnson and Charles Barrett, just a week before the end of the war.

The three Australians were buried side-by-side in the military extension of the local cemetery not far away in the village of Le Rejet-de-Beaulieu.

Frederick Knight died of wounds received in the same action on the same day.

The tunnellers are considered to be four of the last Australians to be killed-in-action during the First World War.

“It’s a pretty sad day for the AIF,” Kelly said.

“The infantry are out of the line after the fighting at Montbrehain, and are in rest positions.

“The AIF is just exhausted, but there’s no rest for the tunnellers.” 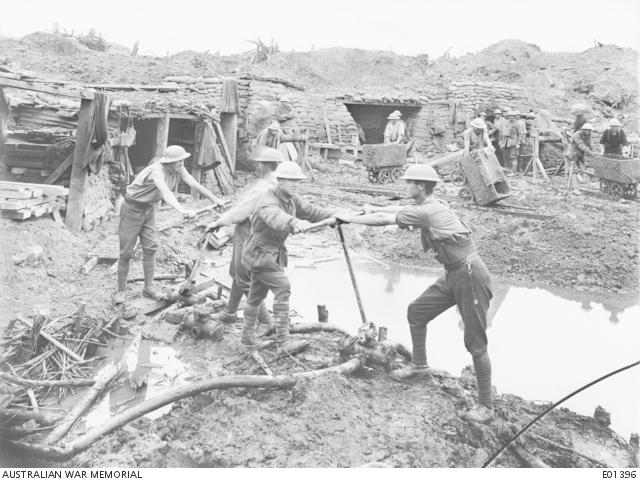 Members of the 1st Australian Tunnelling Company excavating at Hooge in the Ypres Sector. 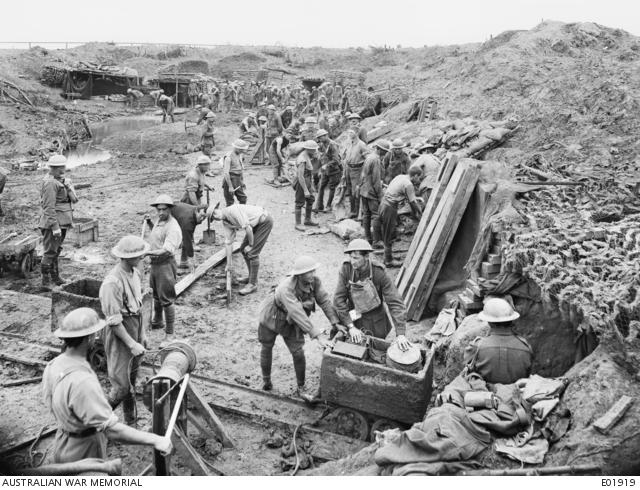 Miners of the 1st Australian Tunnelling Company excavating dugouts for Battle Headquarters at Hooge Crater in the Ypres Sector.

By late 1918, with the armies moving quickly over open country, there was little underground activity on the Western Front and the tunnellers found themselves being used on general engineering, roadworks, bridging and labouring jobs.

“They’re army troops and they go wherever the British need them, so they’re actually still in the front line fighting,” Kelly said.

“They are doing engineer work, unloading heavy steel joists to get equipment across the canal, when they come under shell fire and get struck.

“Davey actually had a premonition about his death, and went to Woodward the day before, but Woodward dismissed it because he thought Davey just had a bit of the wind up.

“Davey must have been thinking to himself, ‘How many more times do we have to go to the well before we finally get knocked?’

“I think he realised his time was up, and sure enough, the very next day he gets hit by shrapnel and is killed.

“To think that these men are still being killed that close to the end of the war is pretty awful.

“His poor wife would have got the telegram just as the war was ending ... and you just think to yourself: Why? Why didn’t he make it home?

“He was so close. It must have been utterly devastating for his family.” 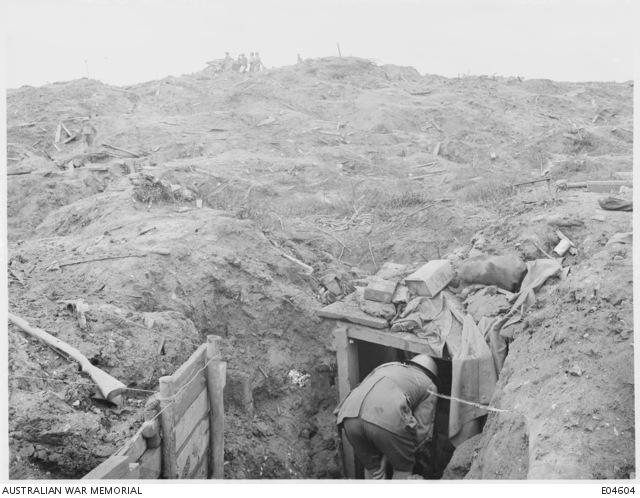 An unidentified soldier entering a tunnel in the famous fighting ground of Hill 60. 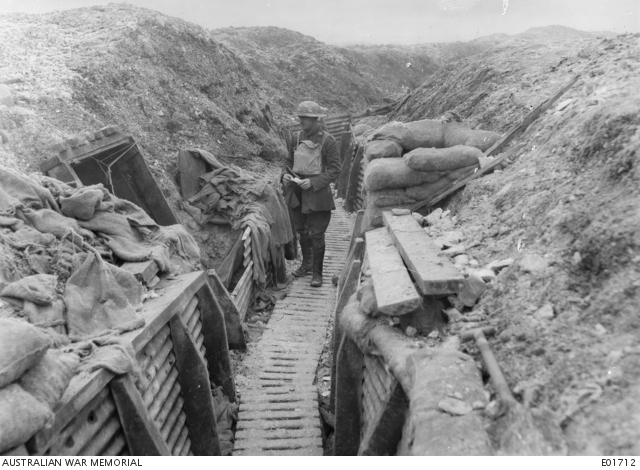 The entrance to Hythe Tunnel in a communication trench known as Hythe Alley at Hill 70 near Loos.

Davey had enlisted in April 1916, and sailed for active service on board the troopship Ulysses, before joining the 1st Australian Tunnelling Company in France.

“Mine warfare on the Western Front was always particularly fraught,” Kelly said.

“You’re tunnelling underneath enemy lines to pack the tunnel with explosives to send them to kingdom come, while they’re trying to do the same thing to you.

“It’s quite a brutal war underground...

“They’re working with candles or lamps, and there’s always the danger of collapse.

“They have to get oxygen hand pumped down, or wear special air tanks, because they are down so far, and the oxygen is so thin.

“They would have a bird down there with them, just like they did back home, because of the carbon monoxide. They’d keep an eye on the bird and if the bird keeled over, then they knew it was time to escape if they could.

“So there was all that to take account of, let alone the fact they were always listening out for the enemy mining towards them at the same time. 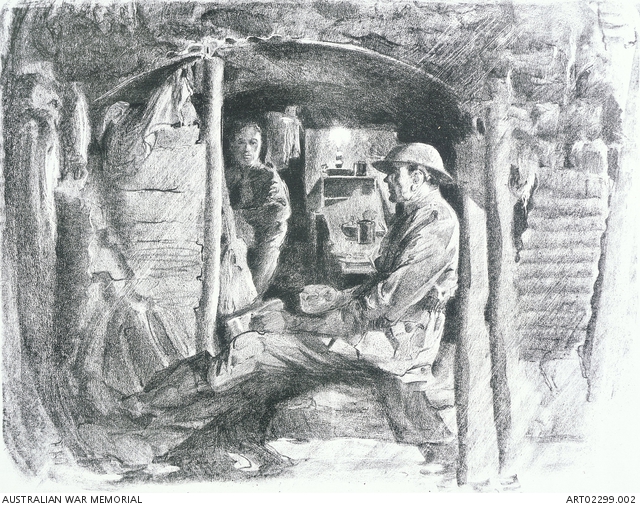 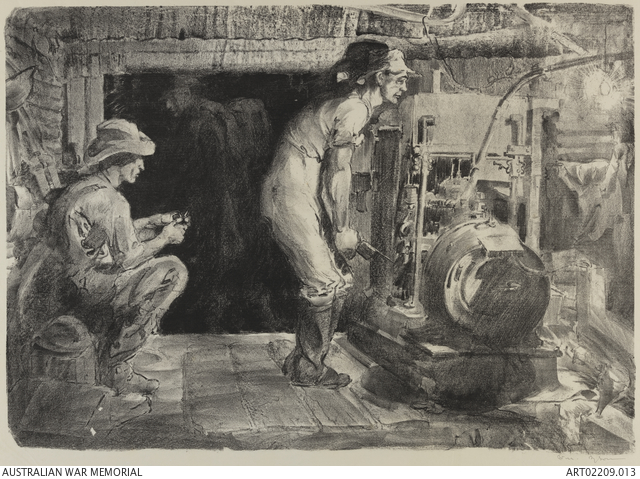 Will Dyson's The Dynamo, Hill 60. Here a dynamo for electricity generation is used to light the tunnel.

“There’s a lot of mining and counter mining all along the Western Front ...

“There were even instances of people breaking into each other’s galleries and there being hand-to-hand fighting and shooting underground.

“Miners always said they were okay if they could hear the enemy in a nearby gallery; it was when things went quiet that they thought, ‘Oh, oh.’ Have they packed it with explosives and it’s about to go off?

“So it wasn’t as simple as running a shaft under your enemy’s trench system; there was so much else to be worried about as well.

“Pushing the galleries forward ... they’d have them reinforced with wood, shoring up the walls to stop them caving in.

“They’d have hoses down there as well, pumping water out so that they wouldn’t flood. So there was plenty of nature to contend with, let alone the enemy…

“It was quite a stressful war underground; I wouldn’t wish it on anyone.

“It’s frightening enough when you’ve got tonnes of rock over your head... that’s a particular stress on its own, let alone being under the guns, upstairs in the trenches. 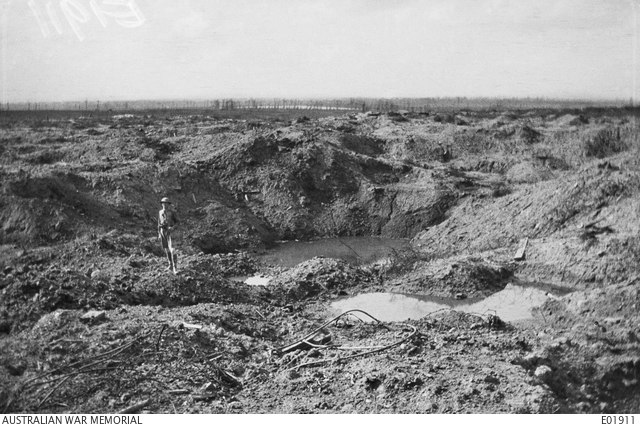 Looking from an old crater on the north side of Hill 60 over the shell pitted ground towards Zillebeke Lake. 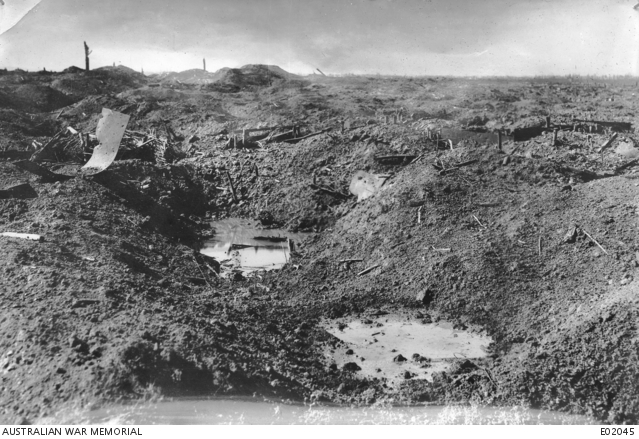 View of the shell strafed surface of Hill 60 in Belgium.

“Davey is involved in the mining under Hill 60, and he’s with Captain Woodward when the British mines go off at Messines in June 1917.

“That hole in the ground is still there, over 100 years later, and you can see why the German front line there was annihilated – because there was nothing left.

“For Davey to go through all that, only to be killed a week before the end of the war, it’s utterly devastating.

“There are so many stories of men like Davey who have a premonition of their own ending, and yet…

“They need to get the job done, and they don’t want to let their mates down, so they do it anyway... despite knowing that they are probably going to die. It’s a testament to their courage…

“It takes a special sort of human to be able to do something like that.” 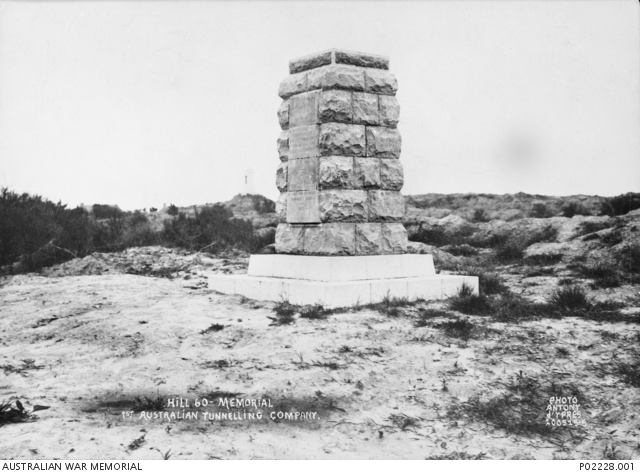 Ypres, Belgium. c1923. A monument erected at Hill 60 to commemorate men of the 1st Tunnelling Company.