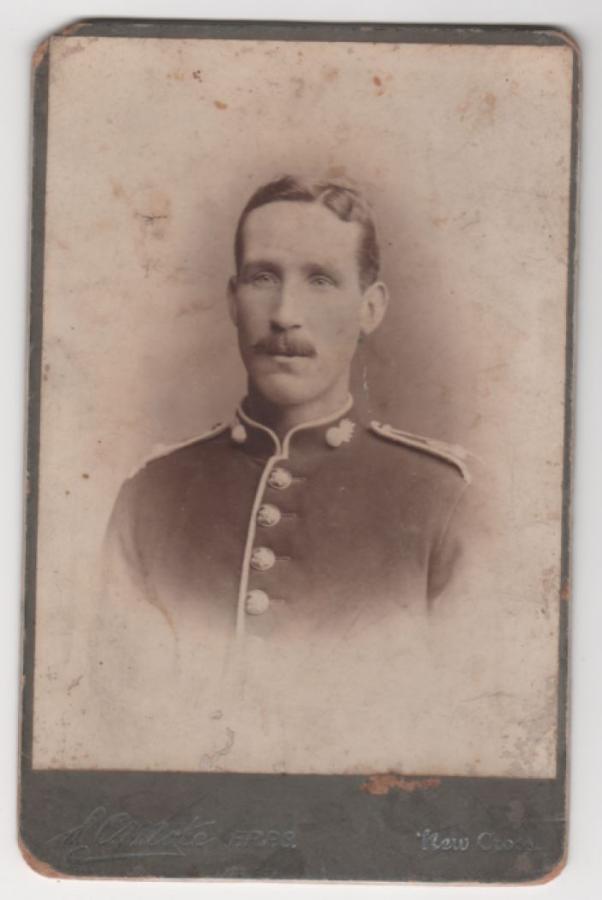 Albert Ernest Manley had been on the Western Front just over a month when he died during the freezing winter of 1917, leaving behind his wife and infant daughter.

His older brother Alfred had been wounded in France in 1916 and his younger brother Frederick had been captured by the Germans in 1915.

The three brothers had served in the British Army before the war and were living in Sydney when the First World War broke out in 1914.

They were from a large family in England with a proud military history.  Their father John had served in the Royal Marines, as had their eldest brother, John.

Albert Ernest was the third son and seventh of 10 children born to John and Catherine Manley in Devonshire, England, in 1881. He was known by his middle name of Ernest and served with the Grenadier Guards for 12 years.

Ernest’s older brother, Alfred, was the fifth child and second son. Born in 1876, he served in the Grenadier Guards for 12 years, including in Egypt with Lord Kitchener in 1898 during the Anglo-Egyptian conquest of Sudan, and in South Africa in 1902 during the second Boer War.

Their brother, Frederick Walter, was the ninth child and youngest son. He was born in 1885 and served in the Royal Fusiliers for eight years. He was transferred to the Royal Field Artillery and was sent to India in December 1904, where he spent the next six years.

The oldest of the three brothers, Alfred emigrated to Australia in 1911 with his wife Sarah and their daughter, Ivy Hilda. Ernest and his wife Eleanor emigrated a few years later with Frederick, who had transferred to the reserves to be able to do so.

When they arrived in Sydney in 1913, they stayed with Alfred and his family at the United Dental Hospital in Surry Hills where Alfred was the caretaker.

By the time the First World War broke out in 1914, Ernest was living in Leichhardt, where he worked for the Leichhardt Municipal Council. 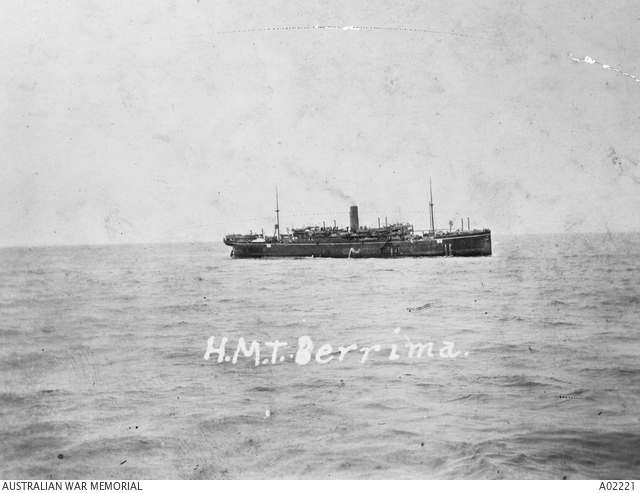 Determined to do his bit, Ernest joined the Australian Naval and Military Expeditionary Force on 11 August 1914.

The Australian Naval and Military Expeditionary Force was the first military unit raised for overseas service in 1914.

It consisted of about 1,000 soldiers and 500 sailors who were tasked with capturing German protectorates in New Guinea.

The force was hurriedly put together, and Ernest embarked from Sydney aboard HMAT Berrima on 19 August 1914, just over a week after enlisting.

The Australian troops took part in the seizure of key towns and German radio stations in New Guinea, Ernest taking part in the successful capture of the town of Rabaul.

By March 1915, Ernest had contracted malaria, which prevented him from joining the main Australian Imperial Force until September 1916. He served at a camp, guarding German prisoners, until he was finally able to depart for the war in Europe. He left behind his wife Eleanor, and his infant daughter, Mary, born in April 1916. 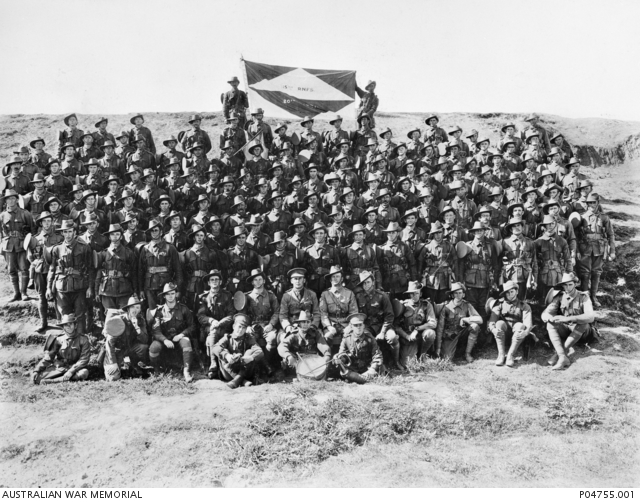 Ernest arrived in northern France in December 1916. He served with the 20th Infantry Battalion, which was occupying the Dernancourt sector of the Western Front in the Somme region.

On the night of 5 February 1917, while the battalion was in the process of moving to a position behind the front line, a German aircraft dropped a bomb into a hut in which a group of soldiers were taking refuge.

Ernest suffered a compound fracture to the skull and was rushed to the 5th Australian Field Ambulance. He did not recover from his wounds and died on 7 February 1917. He had been on the Western Front for just over a month.

Just six days after his death, his brother Alfred set sail back home for Australia.  Alfred had enlisted in July 1915, and was wounded in France in August 1916, sustaining a serious gunshot wound to his spine.

Their brother Frederick, an Imperial Reservist, had been called up at the start of the war, returning to England in October 1914 to fight with the British. He was reported missing in the field on 23 April 1915 and spent the rest of the war as a German prisoner of war. He was repatriated back to Australia in 1919 and died in 1953.

Ernest was buried at the Dernancourt Communal Cemetery Extension.

Learning of his death, his grieving widow, Eleanor, described him in the local newspaper: “My dear husband Pte A. E. Manley. A soldier and a man.”

Their grandson, Ronald Ernest Trevillion, was named after the grandfather he had never known. Ron says: “Each Anzac Day, Nan would sit in her lounge room, with a glass of sherry, and watch as the 20th Battalion passed by. But as the numbers dwindled, she found it too difficult to watch.’’

Today, Ernest’s name is on the Roll of Honour at the Australian War Memorial in Canberra. 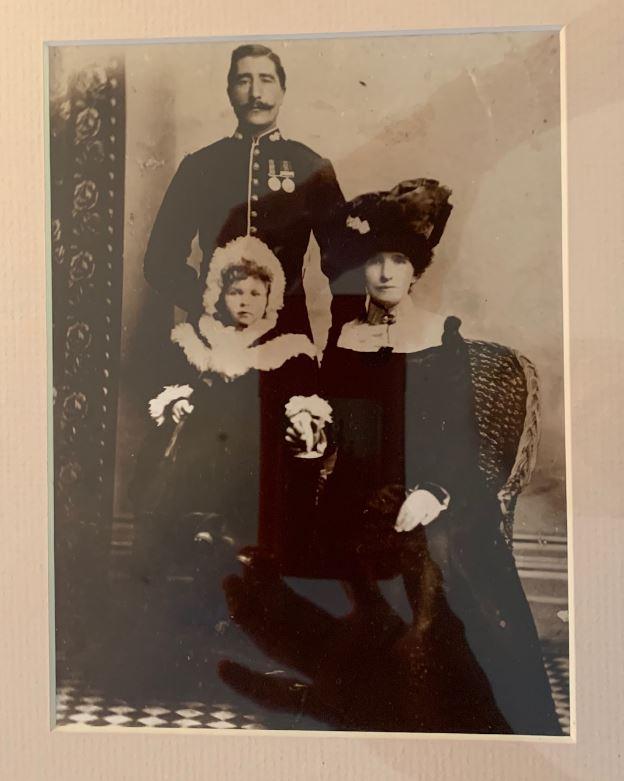 For Winsome Byrne, the ceremony was especially poignant. Her grandfather was Ernest’s older brother Alfred.

“The ceremony was just lovely,” she said at the time.

“The Last Post Ceremony is one of the things I like to go to whenever I visit the Memorial.

“I always find it very moving, the fact it’s dedicated to one individual soldier.

“Usually you don’t know them, but you listen to their stories, and I always come away, my face laced in tears.

“It’s just such a lovely tribute to the people who died.

“Ernest had really only just put his feet on the ground in France when he died in 1917.

“He’d joined the Grenadier Guards when he was only about 18, and then he signed up here in Australia to fight with the Australians in New Guinea and then France.

“He went to have Christmas dinner with his family in England, and then he died a few weeks later.”

Winsome’s grandfather, Alfred, returned from the war, but was never the same again. He died in 1932.

“I never knew him,” Winsome said.

“He died before I was born, and my mother didn’t talk about the war. I didn’t even know that two of his brothers had come to Australia.

“I always thought my mother’s parents were the only Manleys who came.

“It was only later on, I discovered Ernest had come to Australia. And then I did some more digging, and I found out Frederick had come out at the same time.

“I had no idea, and nobody in the family seemed to have any idea either.

“Then I learnt about Frederick, and the list just goes on and on…

“I was absolutely fascinated. I wanted to learn more and I wanted to know why I didn’t know anything about them.

“My grandmother had died when I was only nine, but I couldn’t understand why my mother had never mentioned them.

“She did say once that three members of her family had died in war and she didn’t want her son – my brother – to go to war or sign up during the Second World War, but that was all she ever said.

“I still haven’t found out who the other two were who died or even how far back she was talking.

“So it’s been a bit of mystery, piecing it all together.”

Winsome travelled to the Somme battlefields in 2016 and visited Ernest’s grave in Dernancourt.

“You can’t imagine what it was like and what they went through,” she said.

“It was absolutely hideous, and going there, and walking over the duckboards, and along the reconstructions of the trenches, it’s very moving.

“I know sometimes people think it is glorifying war, but I don’t think it is, I think it is commemorating sacrifice and paying tribute to those people who died.”

The Memorial’s galleries and exhibitions are temporarily closed, but the Memorial is still telling stories about our nation’s servicemen and servicewomen and the Australian experience of war.

Research a family member, explore interactive digital experiences, listen to podcasts, and watch videos about the amazing objects that make up the National Collection at the Memorial.