'She's everything I needed her to be' 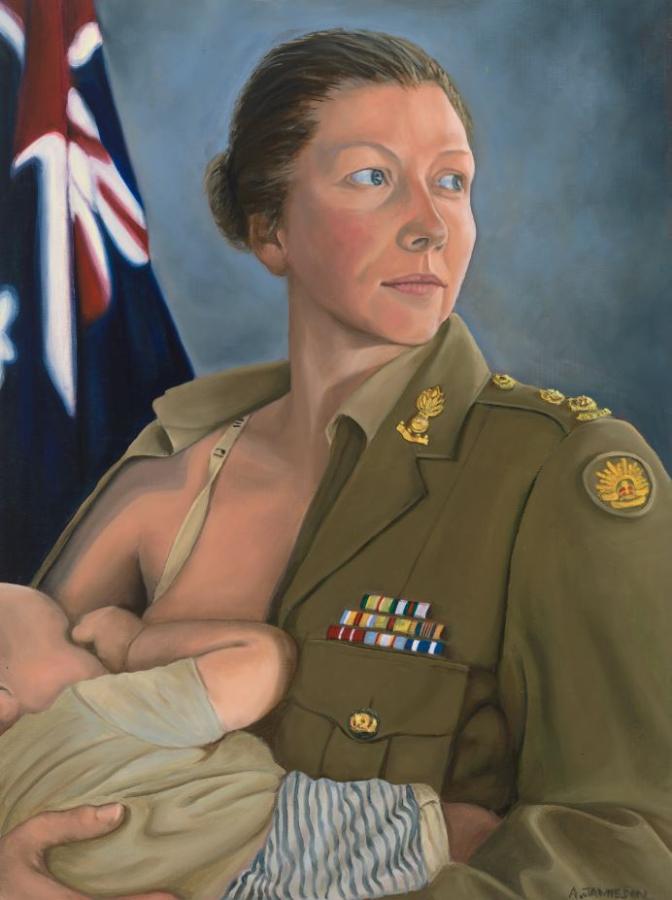 As a child growing up in the Netherlands, she was inspired by the art and architecture around her.

As a young army officer in Australia and Afghanistan, she would draw scenes of military life – a picture of a friend’s webbing as they waited for a transport, a drawing of her colleague's boots as they studied together, and a sketch of soldier’s son from a photograph that he carried with him on deployment.

But it is one of Jamieson’s paintings that has since captured the public imagination.

The retired Australian Army major and mother of three won the Australian War Memorial’s 2022 Napier Waller Art Prize for her work The Promotion, which features a servicewoman breastfeeding her baby in uniform.

The work captured the hearts of judges and public alike, winning the $5,000 People’s Choice award with a record number of votes.

It is the first time in the prize’s history an artwork has won both prizes.

“Allowing her out into the world and allowing people to see her has been a little bit terrifying.

“But I’ve been blown away by the entire ride.

“The way she’s been received has been better than I could have ever dreamed.

“It’s just been shared so widely … America, Canada, New Zealand … and the response has been so overwhelmingly positive that there is no bigger compliment I think for her. 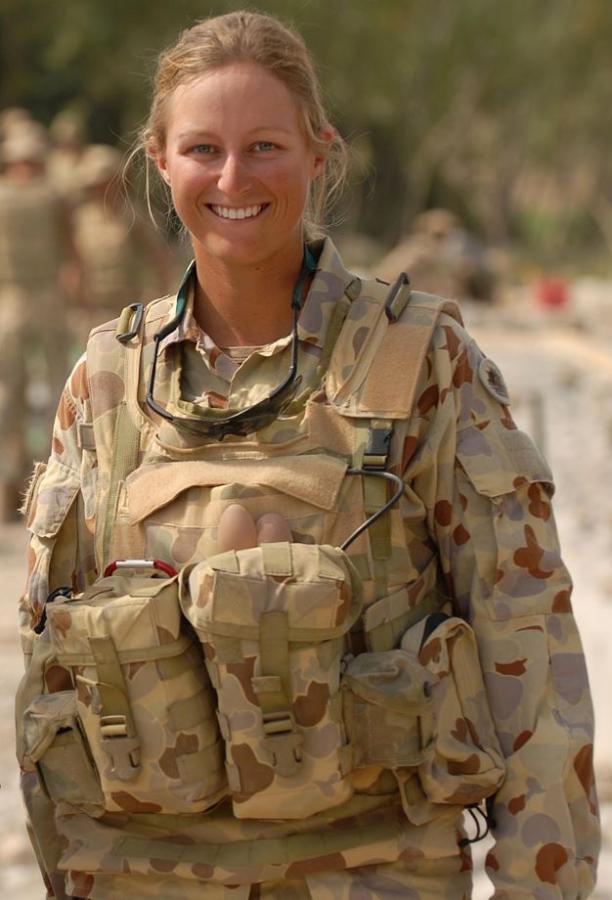 A former army engineer, Jamieson took inspiration from her own experiences while creating the work.

“The mother in me could never make peace with the officer I wanted to be,” she wrote in her artist’s statement.

“While pregnant with our first child I planned my return from maternity leave blind to the person I would become when promoted to mother.

“I've always admired the leaders I've served with – they give so much of themselves for their people.

“When our second and third children arrived, it was evident I couldn't be both the officer I wanted to be and the mother I needed to be.

“I had incredible support from my husband and army but it didn't change my capacity to give of myself. Nor did watching friends manage the conflict with grace and determination. My choice was difficult but obvious and, in the end, empowering.

“But she is not me. She is the woman whose career came first.

“She has dedicated herself to her soldiers and her service and achieved so much. Yet now, as a new mother, she has returned from maternity leave changed in ways she never imagined; this promotion might be her greatest challenge yet.

“I dedicate her to the mothers that serve; to their sacrifices and conflicted hearts and to the families who support them.” 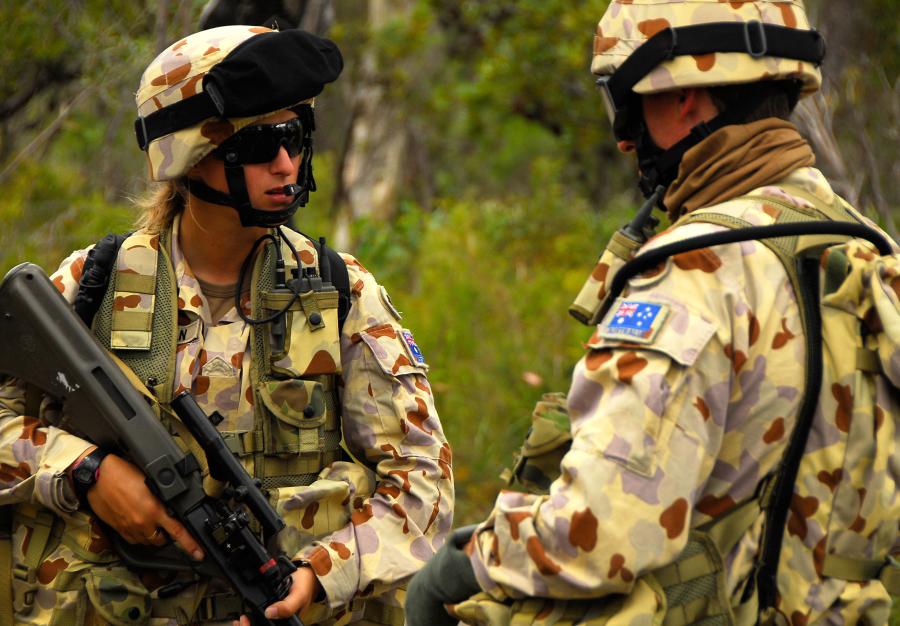 Jamieson was born in Sydney, and raised in the Netherlands. She grew up in Schiedam, near Rotterdam, until the age of 12.

It was there, that she also discovered a passion for engineering, inspired by the city’s magnificent old windmills, drawbridges and canals.

“I’ve always drawn, but I suppose at school I was torn between my creative side and my technical side,” Jamieson said.

“And that goes back to when I was growing up in Holland.

“Even as a small child, I was fascinated by the aqueducts and the dyke system, the floodgates and the architecture.

“It just blew me away, and once I realised I had a bit of a knack for maths and science, it seemed a natural path.

“So I ended up choosing engineering and the army.”

She deployed to Afghanistan in 2008 as a troop commander in charge of a team of construction engineers during Operation Slipper, as part of Reconstruction Task Force 4.

The taskforce was responsible for building a series of patrol bases in Uruzgan Province as well as an all-weather river crossing. They battled the heat and dust as well as rocket attacks while they worked to improve the local infrastructure. 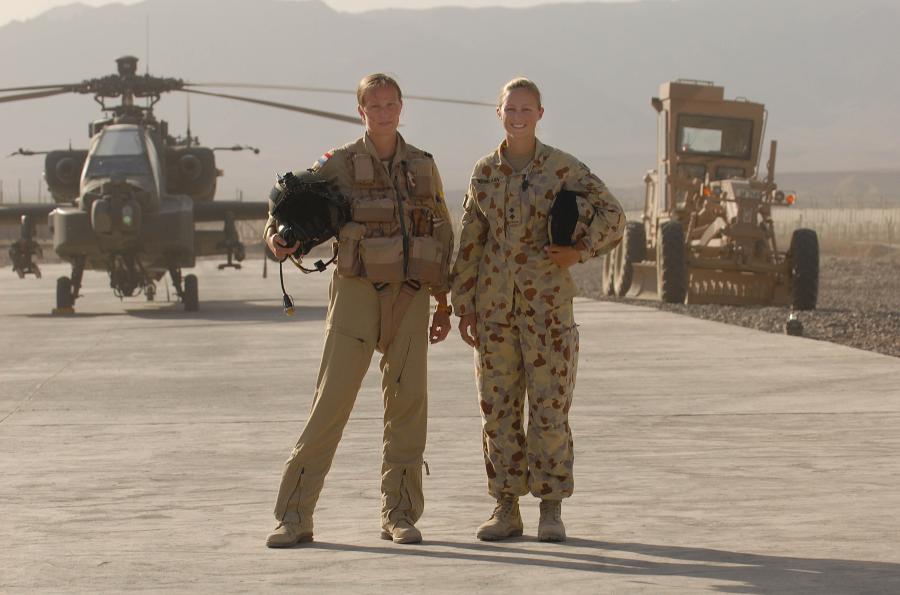 “I’m just in awe of my soldiers,” Jamieson said.

“They had been working so hard for so many hours trying to build the bones of the patrol base to basically create some safe walls for them to work within ... and they were exhausted, but there was no question that they would stop. They were going to keep going and give it everything they had.

“I remember one time, a rocket had just gone overhead, and we were down in a rock riverbed building the fords.

“We were concreting across a causeway to create an all-weather crossing, and doing it all by hand.

“There were no concrete trucks or anything, and we had these four old cement mixers that were literally held together with zip ties because we’d bought them from somewhere at the local market …

“We had plumbers and mechanics fitting old bits to them to try and glue them back together when a line would burst, and so I think the team using them was as big as the team holding them together …

“We’d lost one because it had fallen apart, and the other two or three were only just working when the rockets came overhead.

“The procedure then was to lock down, and so everyone went to their vehicles – helmets on, armour on …

“I remember being in the vehicle with my sergeant, and he just stopped, and he said, ‘Oh my God, the cement mixer is still running.’

“If that load had hardened in there, we would have lost another one, so we had a bit of a Chariots of Fire kind of moment.

“And it all happened in slow motion. He opened the door, and said ‘Cover me’, then ran out to this cement mixer, threw the handle so that it was emptying out the concrete, ran back again, got in the car, and closed the door.

“It’s funny thinking about it now, but at the time, it saved our job, and it allowed us to achieve what we had to do.

“I still look back with fond memories at the things we were able to achieve.” 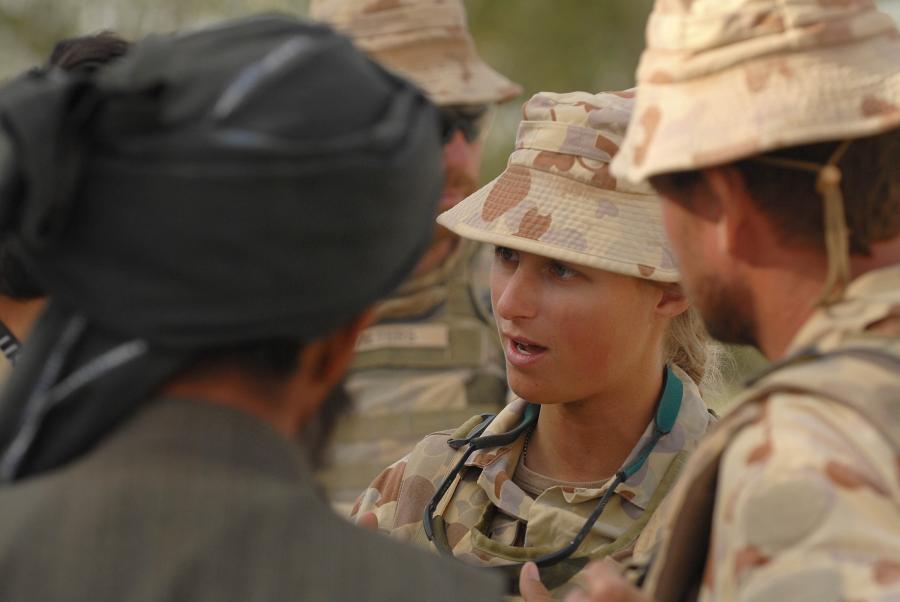 She met her husband in Afghanistan and retired from full-time service in March 2021 to focus on her family and her art.

“I’ve always drawn in the quiet moments in Army,” she said.

“And then, in 2015, when I was on maternity leave with my second child, I decided to pick up a paintbrush and do some painting, more as a hobby on the side.

“And then it just went from there.

“My sister-in-law has forwarded the link for me to enter this prize for the last three years and I finally decided that as I was retiring from full-time service that I should enter.

“As I was deciding what to paint, I thought about what was I still holding onto from my service – What story did I want to tell? What did I want people to know?

“It was my constant companion for ten years, that feeling of being torn, that conflict of, I’m here … but I also need to be somewhere else … the feeling like that I wasn’t achieving what I wanted to in either role. 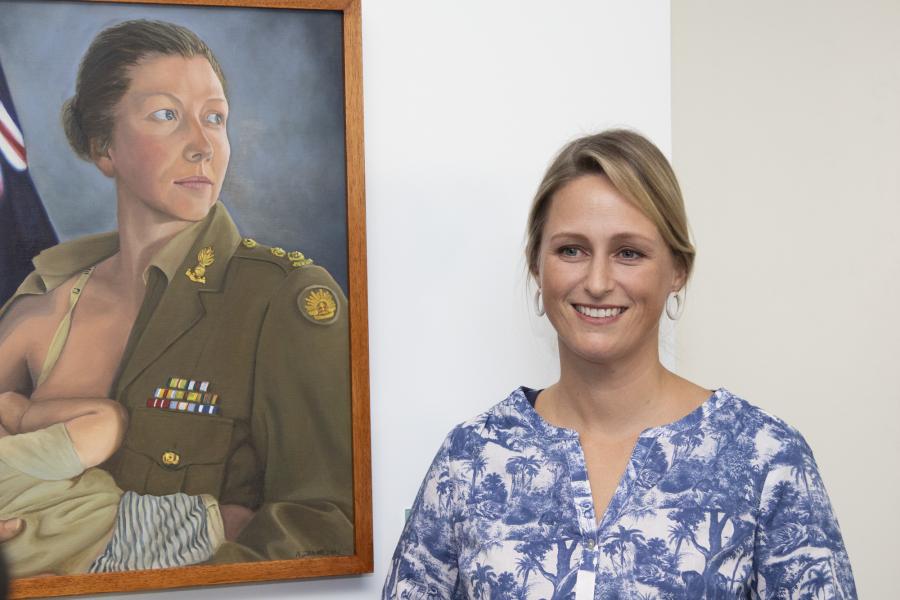 Anneke Jamieson, pictured with her work The promotion.

The work was her first time painting a portrait in acrylic and oils. She would sneak in time to paint while looking after her three young children.

“It was a challenge in itself,” she said. “With every little part, I was still learning to paint. It was my first acrylic or oil painting of a portrait, so every little part that I was doing had its own little challenges – the shoulder, the medals, the hair – and then little moments of victory...

“I was writing the artist’s statement two days before it was due and I said to my husband I think I’m finished and he said … stand in front of her, and read it to me, and I couldn’t, I couldn’t at all. I just cried.

“It wasn’t until that point that I realised how much processing and emotion had gone into making her.

“And that is the power of this prize and the incredibly valuable gift that it offers.

“I served for 20 years and was a mother for nearly ten of those years… until I finally gave up.

“And it turns out I am not alone.

“People have messaged me, and said, ‘Wow, this is me. This my story. I feel seen.’

“I don’t think there is a greater compliment that I can imagine for my art than: ‘I feel you, and I feel heard.’ 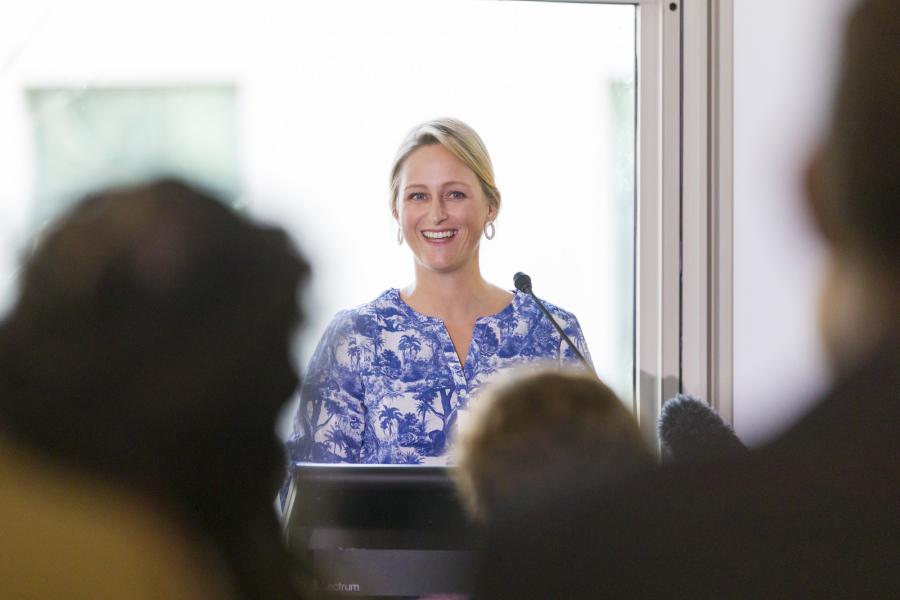 “When I’m drawing or painting, it is the most relaxing thing in the world...

“It’s invigorating and relaxing, all at the same time, and I come away buzzing.

“It’s the same feeling I get when I go to a construction site.

“I’m like a little kid in a candy shop, and I was same when I was painting this picture.”

The artworks is now part of that National Collection at the Memorial.

“Winning the People's Choice award means that she — the woman in my artwork — is doing exactly what I hoped she would,” she said.

“I am honoured beyond words.

“This art prize doesn’t just provide a platform for current and ex-service personnel to tell their vitally important stories, it provides a … means for us to process and validate our story and be seen and heard … in a way that transcends therapy.

“I hope to continue to grow as an artist, in a full-time capacity … so thank you, thank you for selecting my work as the winner, but I’ll be honest and say, thank you just doesn’t feel like enough.

“To paint a piece that people understand and can relate to and can feel, there is no higher compliment.

“I hope seeing these comments and the work will allow service mums to forgive themselves.

“She now belongs to them.”