A few years back I looked at two First World War “Anzac Biscuits” recipes that never made the grade and thought I would look at other early Anzac Biscuit recipes.

The Anzac Biscuit (also called “Anzac Crispies” or sometimes just “Anzacs” - there's also a similar biscuit called "Nutties") is one of the most iconic pieces of Australia’s food heritage, along with the pavlova, and the lamington. While these days what makes an Anzac Biscuit is very well defined, it took many years for the biscuit as we know it to become entrenched in Australian society under that name.

The key features of the traditional Anzac Biscuit are that it contains oats and golden syrup and does not contain egg. However, what is not well known is that there were multiple recipes and biscuit types that were called “Anzac Biscuits”. Some are variations on what is now regarded as a traditional Anzac biscuit and others are just so different you can’t really understand why they are called Anzac Biscuits at all! Interestingly, even within the scope of the traditional Anzac Biscuit, there is a high degree of variation within the recipes with different amounts of flour, sugar or golden syrup and some even had lard instead of butter, used treacle or honey in the place of golden syrup, or most controversially of all, some even included egg!

While some families or communities may have made and sent what we now call Anzac Biscuits to the front in the First World War, it did not have the national cultural import that subsequent stories have given it (although it was sent to Australians serving in subsequent wars). The earliest published recipe we have found so far for traditional Anzac Biscuits is from 1920 (recipe below). Certainly there are a number of similar oat biscuit recipes around during the First World War (I’ll feature them another time) that were possibly sent to the front but the Anzac Biscuit as we know it does not appear to have come into publicly acknowledged existence until around 1919. This is supported by a reference in The Weekly Times, Melbourne, published on 1 March 1919 that says: “… will someone kindly supply me with the recipe of Anzac Crispies, which is evidently a new kind of biscuit.”

I enjoy the occasional bout of historic recipe cooking at home so I decided to look at five different Anzac Biscuits recipes from the 1920s as this appears to be the greatest period of variation. I limited myself to those published in Australian newspapers (available on the National Library’s Trove web page).

I have included images of the original recipes from Trove but have also updated the recipes measurements and added some extra information from my experiences where required.

The earliest recipe I found for the traditional style of Anzac Biscuit was published in The Argus, Melbourne on 15 September 1920. Called “Anzac Biscuit or Crispies”, this recipe was republished a number of times, and is the same as the one published on our website taken from The Capricornian Rockhampton, from August 1926. So it appears that this version remained fairly popular.

Many of the recipes from the 1920s and 1930s I saw had a ratio of 2:1:1 (oats:flour:sugar) but this recipe has a ratio of 2:1:0.5. Other recipes have double the sugar of this one, but 3/4 the amount of flour. There really is quite a bit of variation in quantities of ingredients but essentially this is regarded as the traditional Anzac Biscuit. 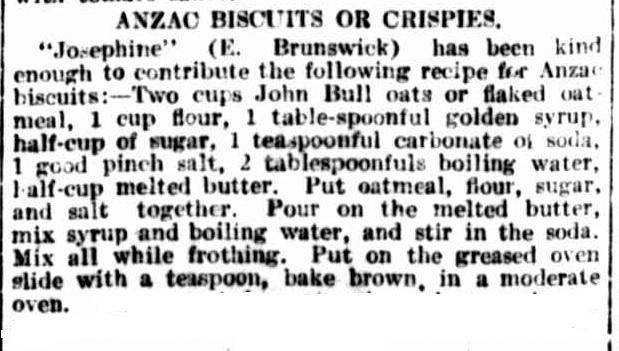 Mix oats, flour, sugar and salt in a bowl.

In a separate bowl mix golden syrup, boiling water then stir in bicarbonate of soda.

Mix into the oats mixture while frothing. 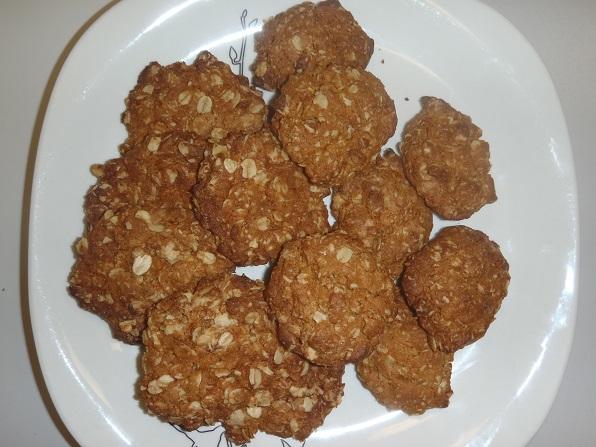 Published in The Mirror, Perth on 26 April 1924 (and reprinted in the The Advocate in Tasmania in May 1925), this biscuit is similar to the 1917 one published in the War Chest Cookery Book I baked in 2013. I used the same jam and icing combination here as I did when making the 1917 recipe. I prefer this recipe as it does not include rice flour, which I found made the 1917 biscuit a bit gritty. Interestingly, when someone wrote into a newspaper in 1927 asking for an Anzac Biscuit recipe, the one that was published was the recipe from 1917, not the oat recipe we think of as being the only type of Anzac Biscuit. 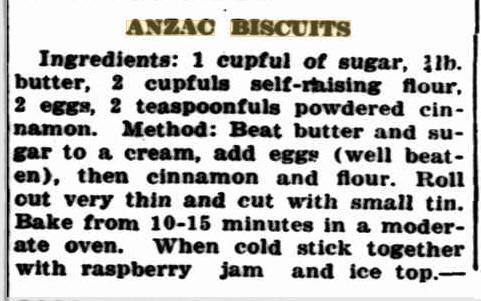 Cream together butter and sugar and add eggs.

Roll the dough out thinly (about 5 mm) and cut out an even number of biscuits using a circular biscuit cutter and place on greased and lined tray.

Allow to cool then sandwich pairs of biscuits together with jam and top with icing (I used raspberry jam and a lemon icing). 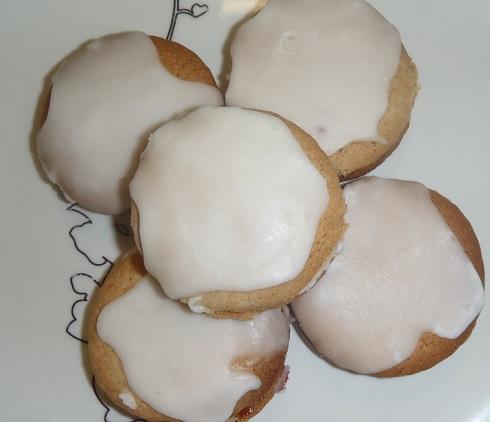 The other main version of the traditional Anzac Biscuit, replaces one cup of oats with a cup of desiccated coconut. The earliest Anzac Biscuit / Crispies recipe I have seen to include coconut was in a 1927 recipe, but it seems to be 1929 when it really took off as a key ingredient (although not enough to completely knock the original recipe off its popularity perch). This recipe was published in the South Eastern Times, South Australia on 25 January 1929. It has more sugar than the 1920 recipe and so combined with the coconut makes for a sweeter, crispier biscuit.

It is similar to the Anzac Biscuit 2 recipe on our website from 1933. 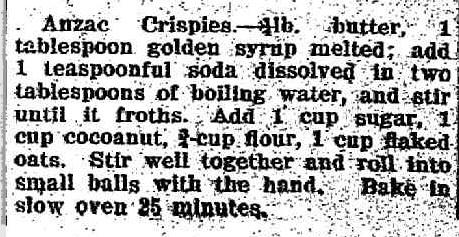 Mix oats, coconut, flour and sugar in a bowl.

In a separate bowl combine melted butter, golden syrup, and boiling water, then stir in bicarbonate of soda.

Mix into the dry ingredients while frothing.

Place teaspoons full of dough on greased and lined tray.

Bake for about 25 minutes at 150 degrees Celsius. 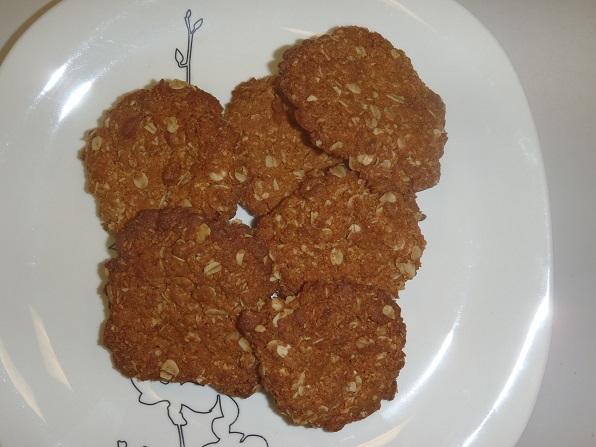 Published in the Brisbane Courier on 4 July 1929, this is one of the more unusual Anzac Biscuit recipes I have come across. Presumably the inclusion of spices and dates made it feel a bit “Middle Eastern” to the author and perhaps commemorated the ANZAC’s service in Egypt, Gallipoli, Sinai/Palestine and Mesopotamia. 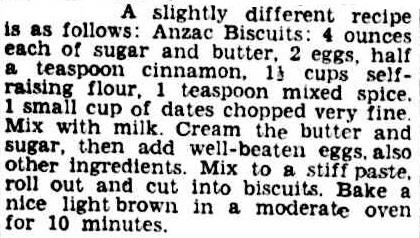 Place dates in a bowl with a dash of milk, then add to the dough and mix until combined.

Roll out and cut out biscuits using a circular biscuit cutter and place on greased and lined tray.

*Note: The original recipe was a very wet one and I found it impossible to roll out properly - I ended up adding about an extra 1/2 - 1 cup of flour, perhaps more (i didn't measure it) so it could be rolled out but I have kept the original measurements here, so you can determine how much extra flour you want to use. For the extra flour I used plain rather than self-raising. 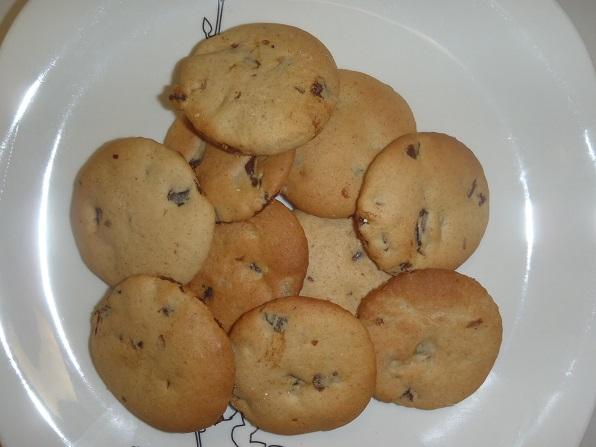 Published on 5 January 1929 in The Australasian, this is a version of the traditional Anzac biscuit but does not contain flour and, when baked, is meant to be similar to a brandy snap. It is also suggested to add a box of almonds and raisins if making it as a dessert.

Combine oats and bicarbonate of soda in a separate bowl and add to butter and sugar mix.

*Note: Lacking flour means this recipe spreads quite a bit, so a teaspoonful is sufficient. Also make sure you place them far apart. I made mine too big (quite large teaspoonfuls!) so they all merged together, but they were still tasty! 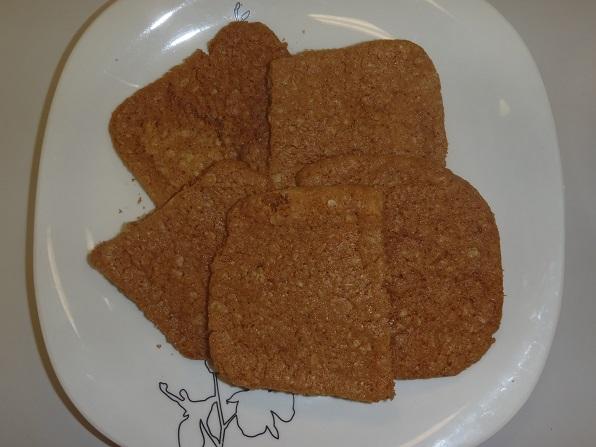 So as for the taste testing, which was most popular? I had a group of willing victims try them out in the tea room over a few days (I made a few hundred biscuits!)

Most of my colleagues who tried the different biscuits loved the 1924 jam filled recipe. Of the traditional recipes, the 1920 tended to be preferred to the 1929 with coconut. The major sugar hit of the 1929 biscuit without flour also went down well and was rather moorish (best to have with a cup of tea or coffee to cut through the sugar) and quite chewy. The least popular was the 1929 recipes with dates. It is a nice enough biscuit, it has a milder flavour and is a softer, more cake like biscuit than the others, so I think was lost a bit among the sweeter, crunchier, more flavoursome biscuits.