This is the first in a series of blogs that covers the basic aspects of Australian uniforms during the First World War. There is a great diversity between nursing uniforms of the First World War. This variety is due to the fact that nursing uniforms were not centrally manufactured or issued in this war. Instead, nurses were given a uniform allowance to equip themselves and were allowed to make their own uniforms if they chose. This, and tailoring variations within Australia and overseas, led to considerable variety in the uniforms as can be seen in contemporary photographs. Styles of collars, blousons, skirts, footwear and headwear show the greatest variety. An example is the bonnet worn by nurses arriving in Egypt in 1914 and 1915, which proved totally impractical and was quickly replaced, without official sanction, with straw hats and grey veils. 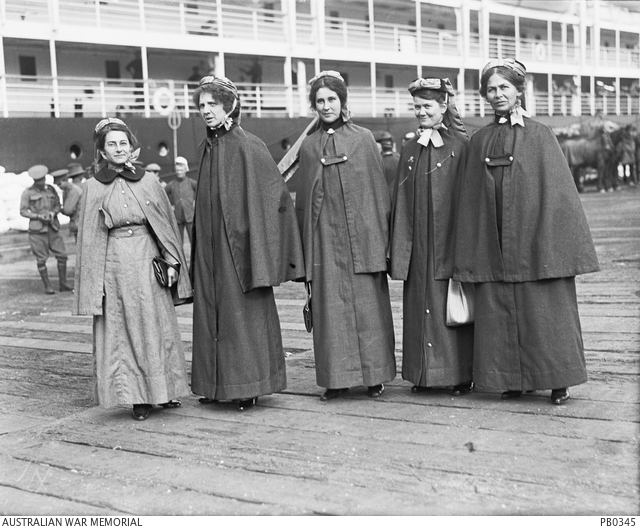 Nurses prior to boarding HMAT Orsova. Note the rather useless bonnet of the 1914 outdoor dress and the variations in collars and fabric colour.

Nurses were often allowed considerable freedom over the wearing of uniforms to help combat local conditions. This is demonstrated by the use of hats instead of bonnets in Egypt in 1915.

More nurses tried to enlist than there were positions so some Australian nurses who were unsuccessful in their attempts to enlist in the AANS went to England to join Queen Alexandra’s Imperial Military Nursing Service Reserve (QAIMNSR), which provided nursing sisters for British Army hospitals, or joined privately funded groups such as the ‘Bluebirds’, who provided nurses to French hospitals. These women wore entirely different uniforms, with their own range of modifications. However such uniforms are not the focus of this blog article. 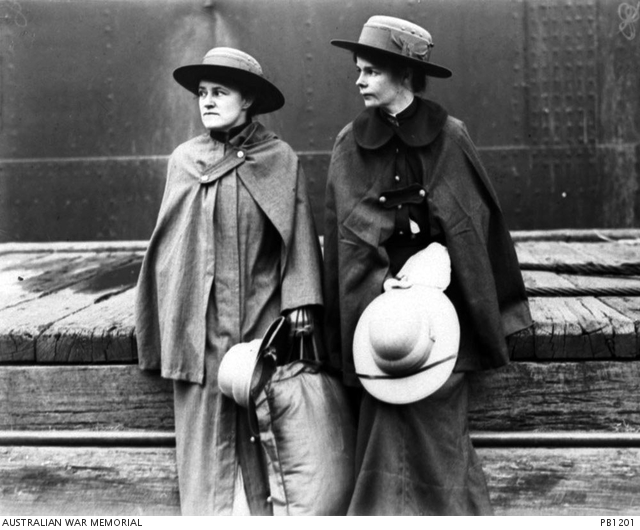 Two unidentified nurses prior to embarkation on the transport HMAT Wiltshire and demonstrating the difference in uniform.

In 1914 the AANS set out for war service wearing a uniform which was little changed from that worn by Australian nurses during the South African War (1989-1902). According to AIF Order 635 of 1915, each nurse received an allowance of ₤19.10.00 with which to provide herself with the following: 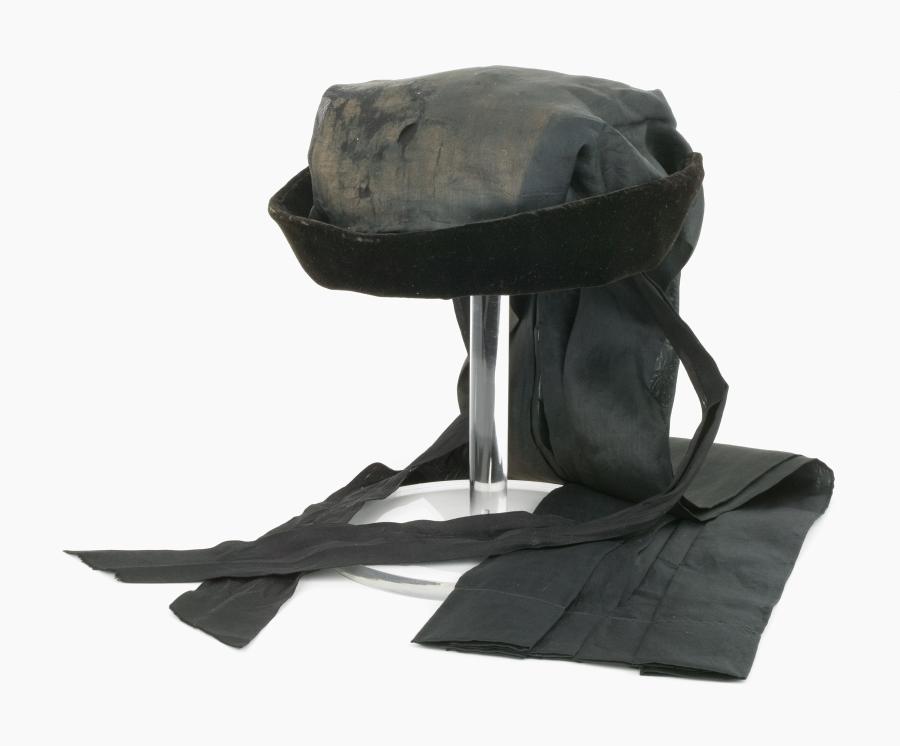 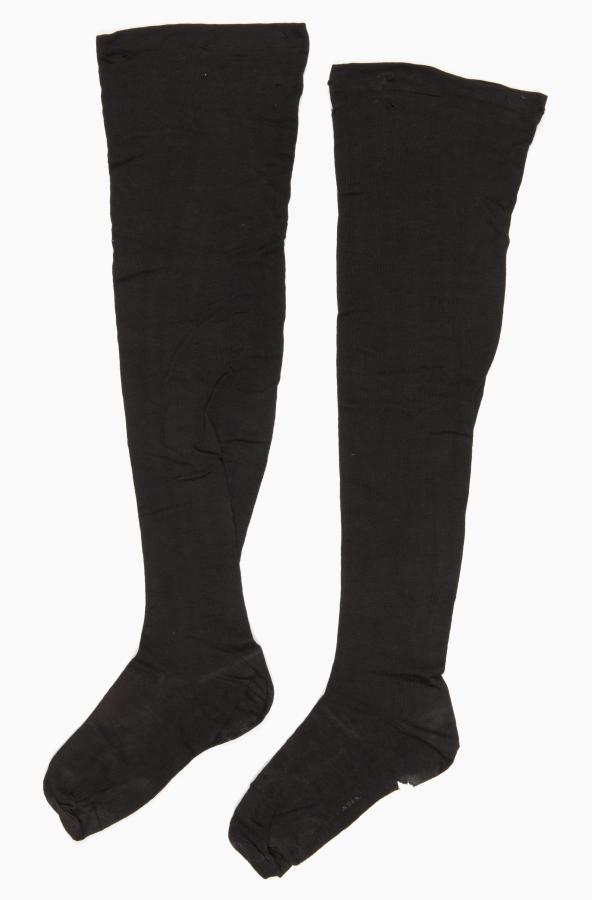 The 1914 -15 pattern outdoor dress could be converted to a mess dress by wearing a scarlet silk shoulder cape fastened with a silver ‘Rising Sun’ badge over the dress, and a white silk raised cap and veil. Mess dress was optional and provided at the wearer’s expense. 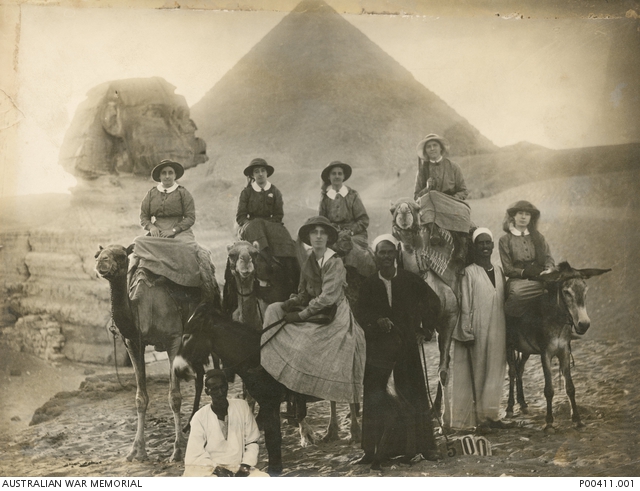 Members of the AANS circa 1915. This photograph demonstrates how the uniform varied according to conditions: the nurses wear hats instead of bonnets.

Nurses did not have military rank in 1914 and nursing proficiency was indicated by dark chocolate coloured stripes on the cuff of the dress. A staff nurse had a plain grey cuff, a sister had two brown stripes, and a matron had a solid brown cuff and stand collar. 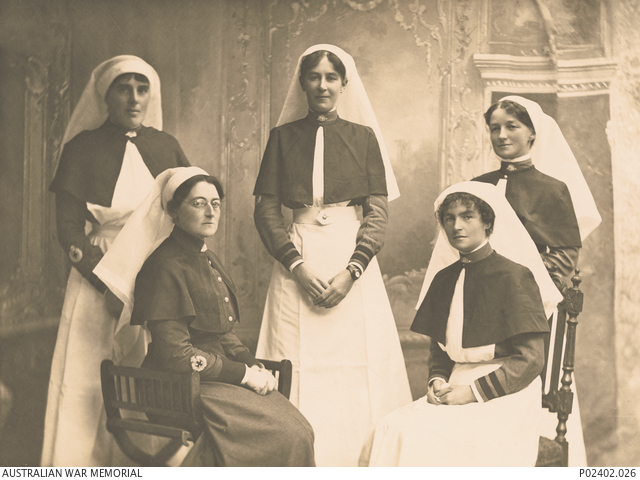 Studio portrait of five sisters of the AANS stationed at No. 1 Australian Auxiliary Hospital and wearing the 1914 working dress. Seated in the front row on the left is Matron Ethel Gray, whose rank is shown by her thick brown cuffs and stand collar.

For further information about nurses during the First Word War, please see Our war nurses: the history of the Royal Australian Army Nursing Corps 1902-1988 by Rupert Goodman and Guns and brooches: Australian Army nursing from the Boer War to the Gulf War by Jan Bassett.