70th Anniversary of the Battle of Kapyong 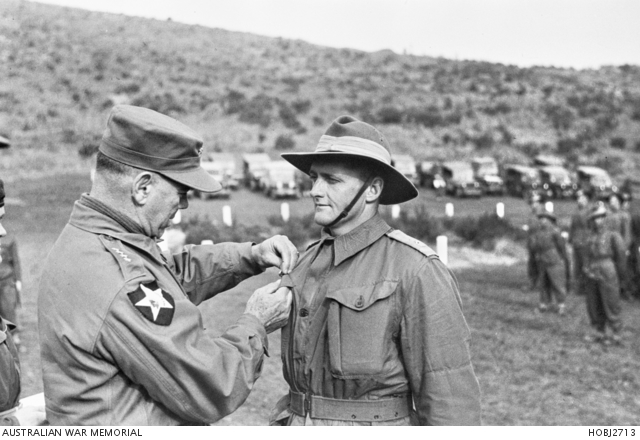 23 April 1951 marks the 70th anniversary of the beginning of the battle of Kapyong.

To commemorate this anniversary, the Memorial has published a selection of archival collections related to the battle including a copy of the United States Presidential Unit Citation awarded to 3 Battalion, the Royal Australian Regiment on 4 December 1951.

The citation, also on display in the Korea gallery, states,

The forward elements were completely surrounded going through the first day and into the second. Again and again the enemy threw waves of troops at the gallant defenders, and many times succeeded in penetrating the outer defences, but each time the courageous, indomitable, and determined soldiers repulsed the fanatical attacks. 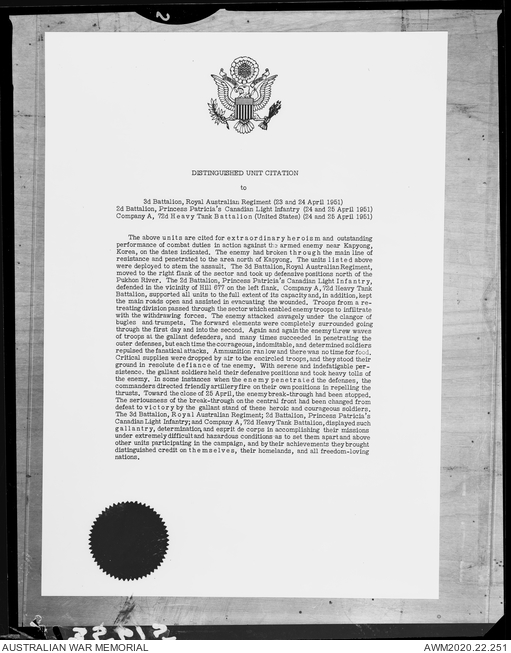 Collection relating to the Korean War service of 3 Battalion, The Royal Australian Regiment, 1951.

3RAR was preparing to enjoy a well-earned rest after fighting off the Chinese People’s Volunteer Army (PVA) and capturing two features near Kapyong, when they received information that the 6th Republic of Korea (ROK) Division was under heavy attack.

The Australians were ordered to pack up and move to a place near Chucktun Ni. Here they received instructions to occupy and defend an area known as Hill 504. 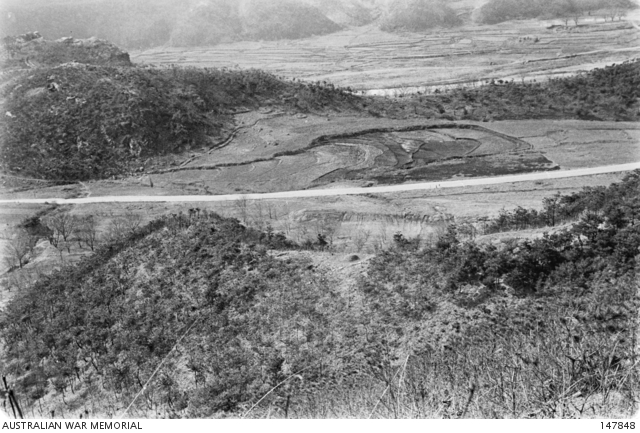 3RAR’s objective was to stem the tide of communist forces, slowing down their advance upon the South Korean capital, Seoul. They had little time to dig weapons pits and erect barbed wire before the arrival of civilians and members of 6 ROK Division fleeing the rapidly advancing PVA. 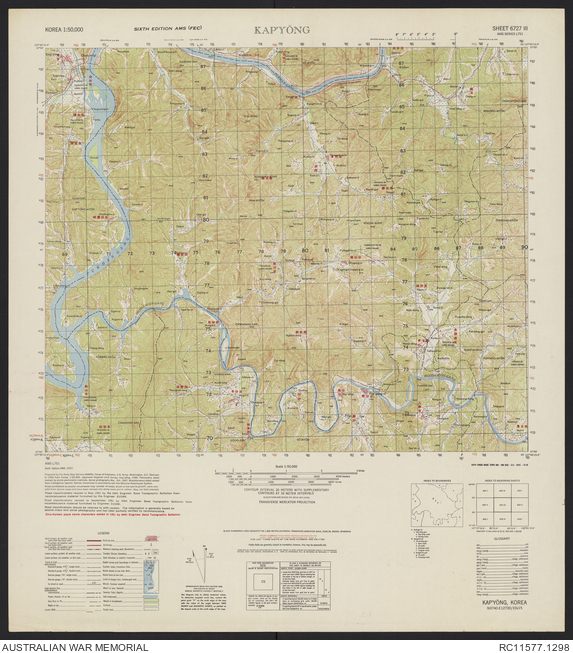 A topographical map titled 'Kap'yong' covering the area around Kapyong, in South Korea.

Captain Ben O’Dowd, in charge of A Company, was concerned that enemy soldiers might hide amongst the civilians and infiltrate the rear of the Australian defences. He contacted the officer commanding B Company to suggest that that they erect a checkpoint. Unfortunately, the company did not take up O’Dowd’s advice.

Shortly after that firing broke out in our rear from the direction of Battalion Headquarters, confirming my fears. We were now isolated and an attack was only a matter of how long it would take the enemy to get organised.

The communists attacked the American tanks. The tank commanders directed fire at ground troops from open turrets, as night visibility was poor. Lacking infantry cover, they were attacked with grenades by the Chinese. 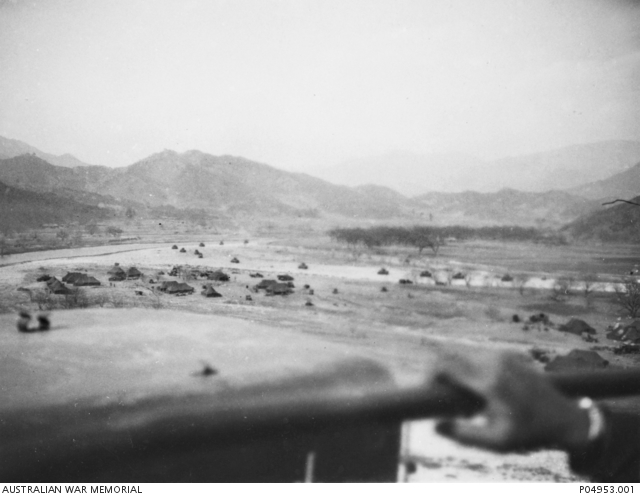 A column of American Sherman tanks moving forward from the south toward the Australian positions into Kapyong Valley.

As the American tanks quickly withdrew, the Chinese attacked B Company, which was occupying a small knoll on the left-hand side of the road. The company managed to repel attack after attack, before the enemy turned its attention to A Company, situated on a long narrow ridge that gradually rose up to Hill 504, where D Company was located. The enemy continued its assault on A Company for several hours, trying to find weak spots without success.

Casualties began to mount, however, and it became evident that O’Dowd’s company did not have the men to occupy a gap that had formed along the ridge. The Chinese machine-gunners found this gap, but were later wiped out.

Attacks upon 3RAR continued throughout the night. In the morning, however, PVA soldiers were hiding behind bushes and in holes. There was a brief pause in the fighting. 3RAR were in urgent need of assistance. 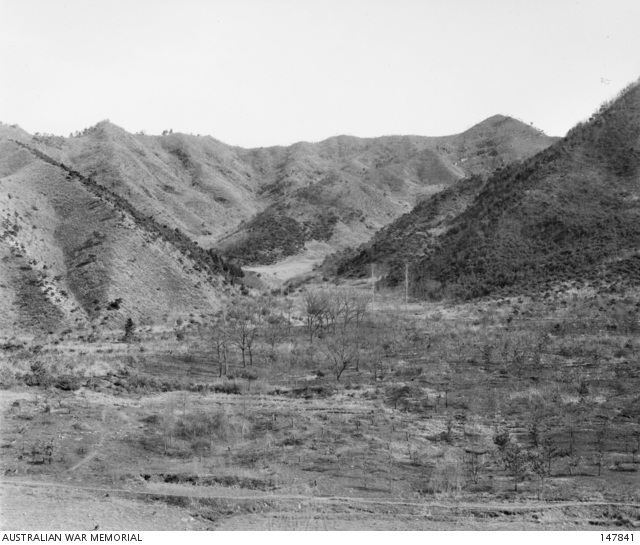 O’Dowd made radio contact with the commanding officer and arrangements were made for the American tanks to drop off food, water, ammunition and evacuate the wounded.

The general in charge of the division came on the phone and told O’Dowd we didn’t exist as we had been wiped out the night before. Major O’Dowd said, “I’ve got news for you, we are still here and we are staying here.”

The PVA, desperate to capture Hill 504, resumed its assault on D Company. Lieutenant Gravener’s company repelled the attack with the support of a New Zealand artillery regiment.

The United States Air Force was called to assist D Company by launching a napalm strike, but missed its target and dropped the toxic substance on the Australians.

Around midday Captain O’Dowd was advised by his commanding officer that he was to organise a withdrawal of the rifle companies. It was obvious to O’Dowd that the Australians must withdraw before nightfall, when they would have the advantage.

O’Dowd requested that the artillery attack the PVA forces who were occupying B Company’s old position across the road, where the enemy was able to observe the Australian withdrawal. 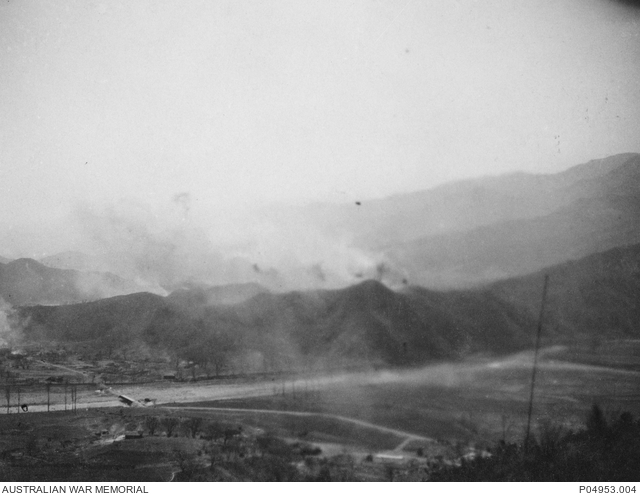 Clouds of smoke issuing from the ground where tanks are in action.

B Company was the first to depart along the escape route, up to Hill 504, down the ridge, and off to the south where the Middlesex Regiment was sited. Meanwhile, the artillery began firing, signaling to the other companies to begin moving.

O’Dowd waited on top Hill 504 for the companies to arrive before instructing them to assume various defensive positions, employing a military tactic known as “leapfrogging”.

O’Dowd’s strategy was a success: 3RAR met its objective to reach a ford at the Kapyong River and meet up with the Middlesex Regiment. 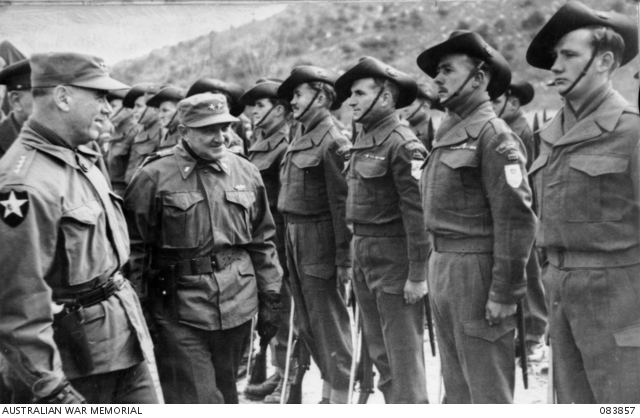 3RAR, the New Zealanders and Canadians were greatly outnumbered by the Chinese People’s Volunteer Army at the battle of Kapyong, but managed to successfully block the enemy’s advance into Seoul for two or three days.

They knew they were cut off with what looked a poor chance of escape. In these circumstances any panic or break in morale would have been disastrous. I don’t believe this possibility existed. They gave as good as they got, fought it out and won.

Further information on recently digitised collections and other resources relating to the battle of Kapyong and the Korean War are available here:

S00019            "Ground Force USA". A weekly radio program produced in the Tokyo studios of the Far East Network of the United States Armed Forces Radio Service. This program pays tribute to the 3rd Battalion, Royal Australian Regiment for its outstanding conduct at the Battle of Kapyong in Korea 24–25 April 1951 for which it was awarded the United States Distinguished Unit Citation

F04842            Reflections on training and leadership: an interview with Lieutenant-Colonel Ben O'Dowd