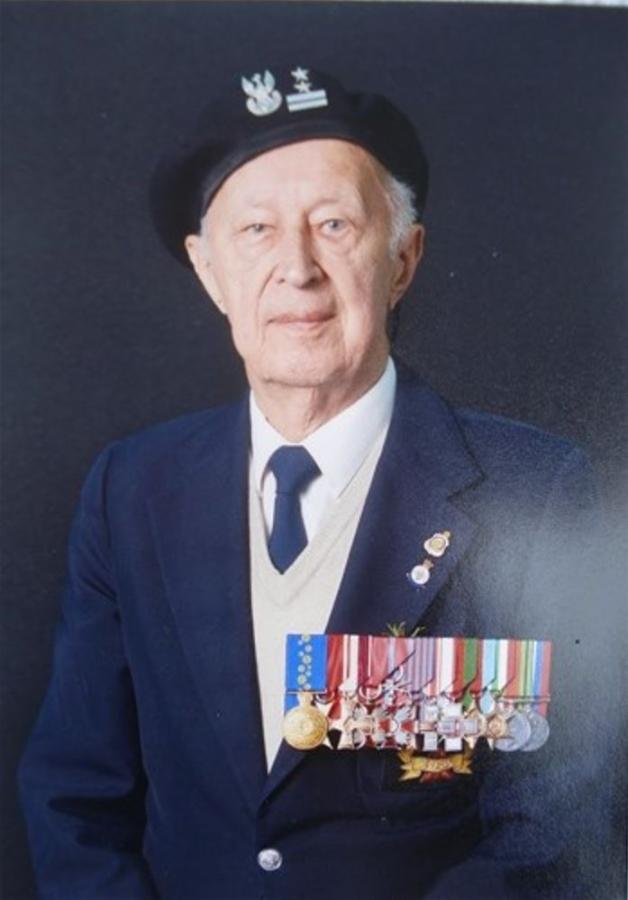 Bernard served with the Polish Armed Forces during the Second World War and was due to take part in today’s Veterans’ March at the Australian War Memorial.

Bernard was born on 1 July 1921 in Zakroczym, Poland. His father, Kazimierz, was of aristocratic ancestry, and had served as a soldier during the First World War and in the war against the Communists in Belruse.

Bernard was 18 years old, and about to start a cadetship at the Air Force Academy in Dęblin, when Nazi Germany invaded Poland from the West on 1 September 1939.

On 17 September, the Soviet Union invaded the Polish Eastern territories, and arrested his father, Kazimierz, who was taken to the USSR. Kazimierz was murdered in Kalinin (now Tver) in April 1940, and buried in one of the mass graves in Miednoje as part of the Katyń massacre. 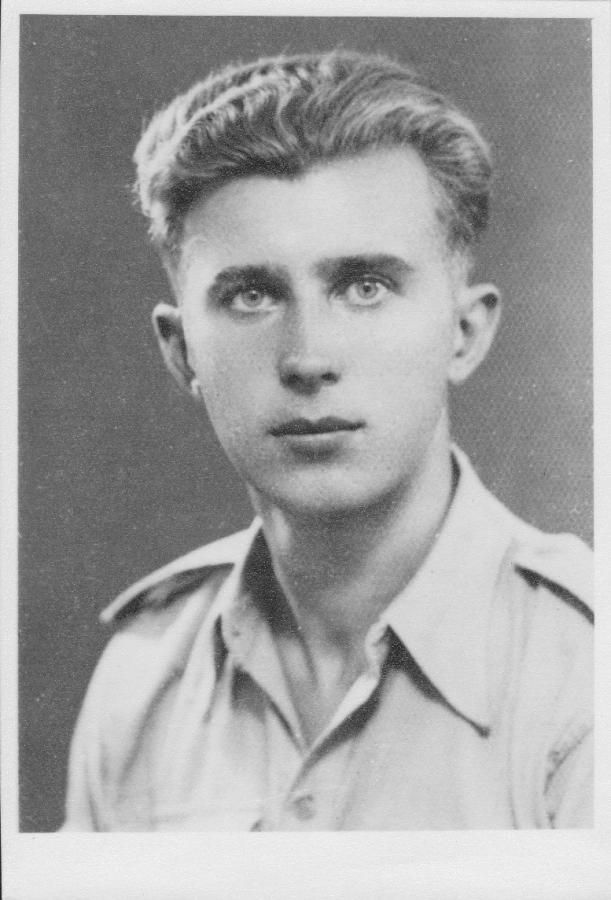 Bernard served with the Polish Armed Forces during the Second World War.

In the months before Bernard was arrested, he helped save the lives of retreating soldiers, women and children, by leading them to freedom and safety across frozen rivers under the cover of darkness.

He was arrested in February 1940, along with his mother, his sister and his brother, and deported to Siberia. He was sentenced without trial to ten years hard labour in a Gulag camp in the Akmolinskaya region.

The Gulags were located in the Siberian forest regions and, as a prisoner, Bernard was required to bury the dead, cut forest timber and help build Soviet buildings. He lived in tents that were dug into the side of the hills and had to survive minus 40-degree temperatures. His daily ration was a kilo of wheat and a litre of horse’s milk, which had to be crushed and turned into bread. Once a week, the prisoners would be given soup broth with the taste of meat.

On 22 June 1941, Nazi Germany attacked the Soviet Union in Operation Barbarossa. In July 1941, the Polish Government-in-Exile in London signed a treaty with the USSR granting an “amnesty” for some of the Polish citizens in the Soviet “Gulags”.

As a result, the Polish Army was formed to assist the allies in the fight against Hitler’s war machine, and Bernard joined it in early 1942.

He left the USSR, first travelling by train from Lugovaya to Krasnovodsk (now Turkmenbasi) on the northern edge of the Caspian Sea. From there, he travelled by boat across the Caspian Sea to Persia (Iran) crammed with hundreds of other would-be soldiers, standing for 48 hours in freezing temperatures. 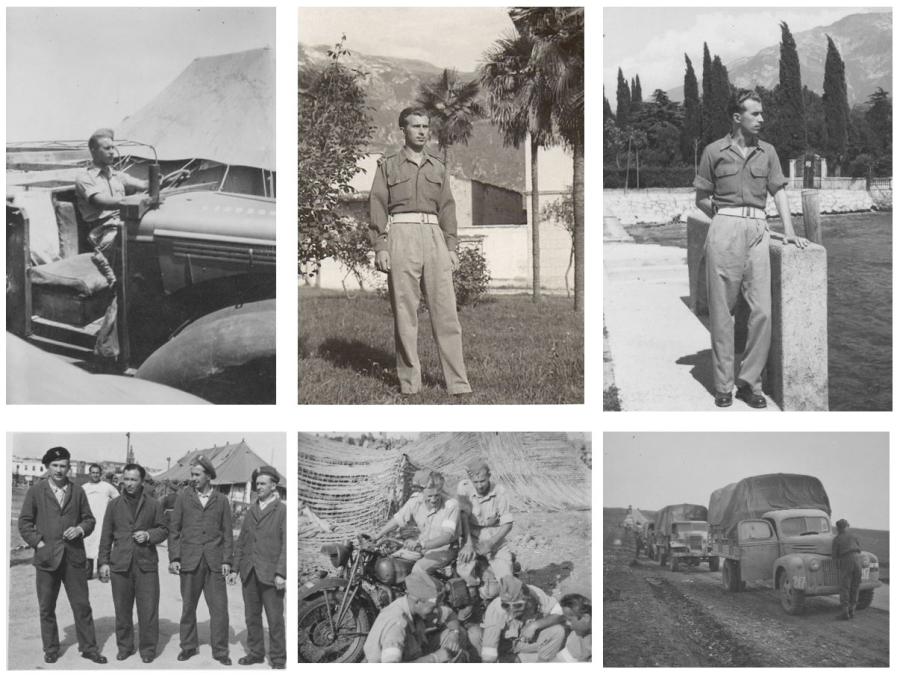 With the Polish Armed Forces under British command, Bernard was transported to Qastina and Gedera in Palestine in May 1942 to train in various aspects of soldiering and, specifically, as a communications specialist.

Bernard spoke six languages and was highly educated in maths, telephony and radio. In that capacity, he was recruited into the 3rd Division of the Carpathian Riflemen of the 2nd Polish Corps.

Prior to the invasion of Italy and the subsequent battles on the Apennine Peninsula, Bernard’s unit was sent to establish, under the cover of darkness, communication cables for the advancing allied frontline commanders and troops. This task was very difficult and dangerous due to German and Italian snipers and heavy artillery.

Bernard bravely participated in the battles of Sangro, Monte Cassino in mid-May 1944), Ancona and Bologna. During this time, he would ride his Indian motorbike across enemy lines to pick up injured and dying soldiers under the hail of mortars and artillery. Those that he saved remember him as the “Indian”, which was the emblem emblazoned on his motorcycle petrol tank.

He was wounded in the chest, arms and legs by fragments of a German bomb during a Luftwaffe bombardment of Loreto, from this point he underwent a number of operations and recovered in various hospitals in Italy and later in Scotland.

Bernard was discharged from the army in November 1948. 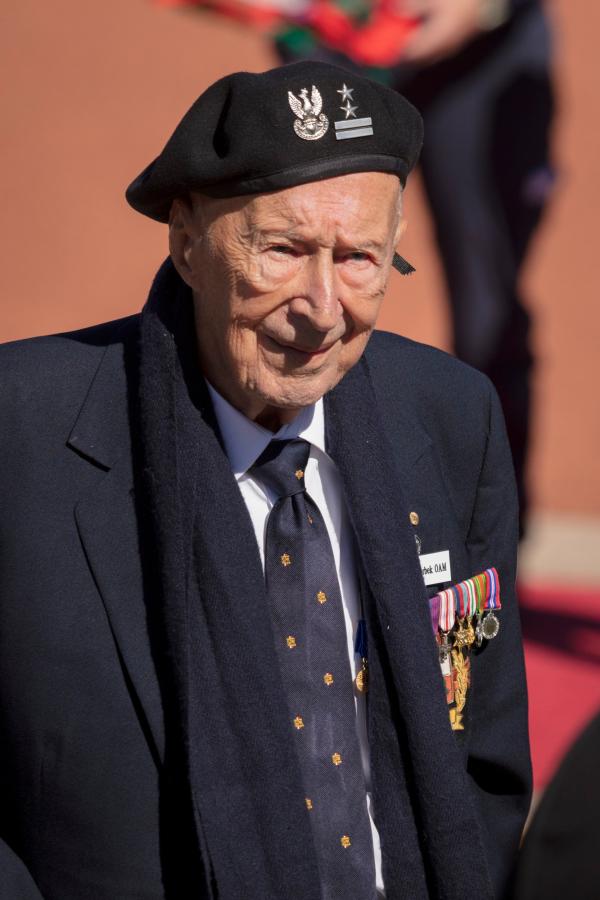 Colonel Bernard Zdzisław Skarbek, OAM, at the Memorial for the 2021 Anzac Day ceremony.

In 1949, he married Maria Oszczypała, who had served as a nurse in the Polish Armed Forces. They lived and worked in London until they immigrated to Australia in 1956 with their daughter Anna.

Bernard was employed at the Canberra Brickworks as a machinery mechanic until 1966 when he joined the Department of Trade, Industry and Commerce in the Australian Public Service.

He served several terms as President of the Polish Ex-Servicemen’s Association (SPK) in the Australian Capital Territory and was also a member of the SPK’s National Board.

He was a volunteer and a substantial fundraiser for causes of the Polish community. His two daughters, Anna Skurowski and Susan Longbottom, also live in Canberra.

He received numerous British and Polish Honours, including the Polish Cross of Valour, the Cross of Monte Cassino and the Cross of Merit with Swords, during his lifetime and was awarded the Order of Australia Medal in January 1990.