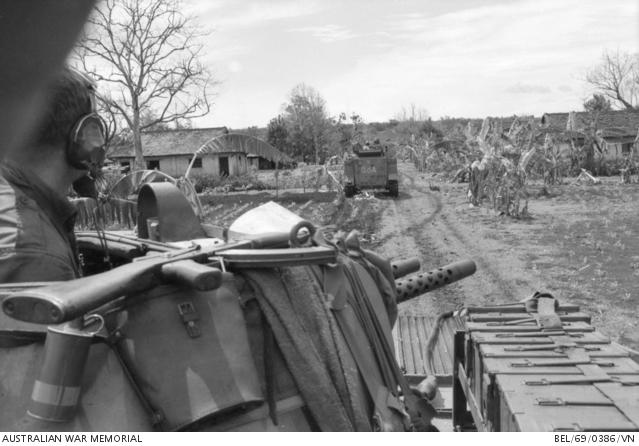 Commander of an Armoured Personnel Carrier (APC) of B Squadron, 3rd Cavalry Regiment, keeps a sharp look out into a banana plantation on the roadside near Binh Ba.

6 June marks the 50th anniversary of the battle of Binh Ba, one of Australia’s most significant engagements in the Vietnam War.

On the 6th of June 1969, two Australian armoured vehicles travelling north from the 1st Australian Task Force base at Nui Dat [pron. Newie – Dat] were fired on from the village of Binh Ba. Rocket-propelled grenades damaged one vehicle. After an exchange of fire, the vehicles departed and reported the attack.

Two South Vietnamese Regional Force platoons were sent to investigate, but were forced to withdraw after coming under heavy fire. After the District Chief requested support, the Australian Task Force ready reaction force was dispatched: an under-strength infantry company from D Company, 5th Battalion, The Royal Australian Regiment; a troop of armoured personnel carriers of B Squadron, 3rd Cavalry Regiment; and a troop of Centurion tanks from 1st Armoured Regiment.

The infantry of D Company and the supporting Centurion tanks and armoured personnel carriers, together with overhead support from Royal Australian Air Force helicopter gunships, entered Binh Ba just after 11 am. They expected to be facing no more than two Viet Cong platoons.

When the Australians came under heavy fire, the soldiers discovered they were facing a formidable force of regular North Vietnamese Army troops from 1 Battalion, 33 NVA Regiment. The Australians reached the centre of the village, clearing houses as they went, but the tanks sustained damage and casualties under the weight of enemy fire. The assault stalled, and the Australians withdrew to take stock.

A second assault began that afternoon. Private Wayne Teeling of 5RAR was killed during the initial move into the village ¬– we will hear his story shortly. As evening fell, the Australians withdrew and set up defensive positions outside the village. B Company, 5RAR, which had arrived that afternoon, spent the night harboured at the edge of a nearby rubber plantation.

Early the next morning B Company, 5RAR encountered a company of North Vietnamese Army soldiers heading towards Binh Ba; a sharp exchange of fire resulted in their rapid withdrawal. D Company entered the village and after encountering no enemy, left the rest of the clearing to local Popular Force soldiers.

Fighting flared up at the nearby hamlet of Duc Trung and B Company, 5RAR, with APC, tank and gunship support moved into the hamlet from the south. The Australians did not encounter the enemy and, seeking to avoid civilian casualties, they handed over to the Vietnamese Popular Force troops to clear the remainder of the hamlet.

A further sweep of Binh Ba was conducted on the morning of the 8th of June, and members of the Australian Civil Affairs unit entered the badly damaged village to assist in rehousing locals and organise reconstruction. The bulk of the reconstruction work was completed about a month later.

During the battle one Australian was killed and 10 wounded. Four Centurion tanks had been damaged by enemy RPG fire, and the majority of the Australian wounded were tank commanders and crewmen. The tanks suffered losses but undoubtedly saved many infantry lives.

Over 100 enemy soldiers were killed and an unknown number wounded.

Despite the South Vietnamese District Chief’s best efforts clear civilians from Binh Ba before the battle, some remained in the village, either unable or unwilling to leave, and a small number were killed. Images of dead enemy soldiers in the village square were later used to support unfounded accusations of war crimes.

The battle was a decisive victory for the Australians and the regiments involved were later awarded battle honours. The decisive engagement resulted in 33 NVA Regiment being forced out of Phuoc Tuy [pron. Fook – Twee] province into their sanctuary refuges in neighbouring provinces. 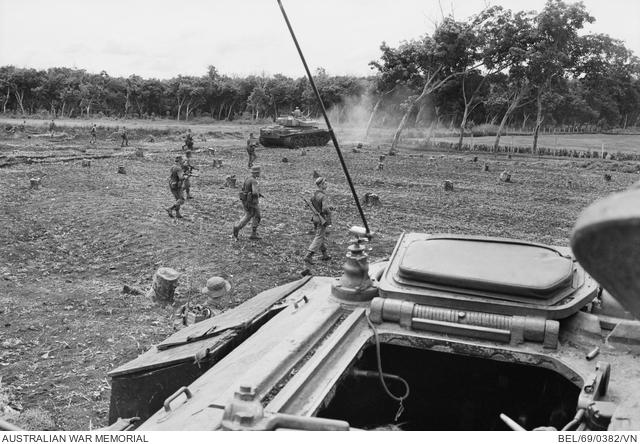 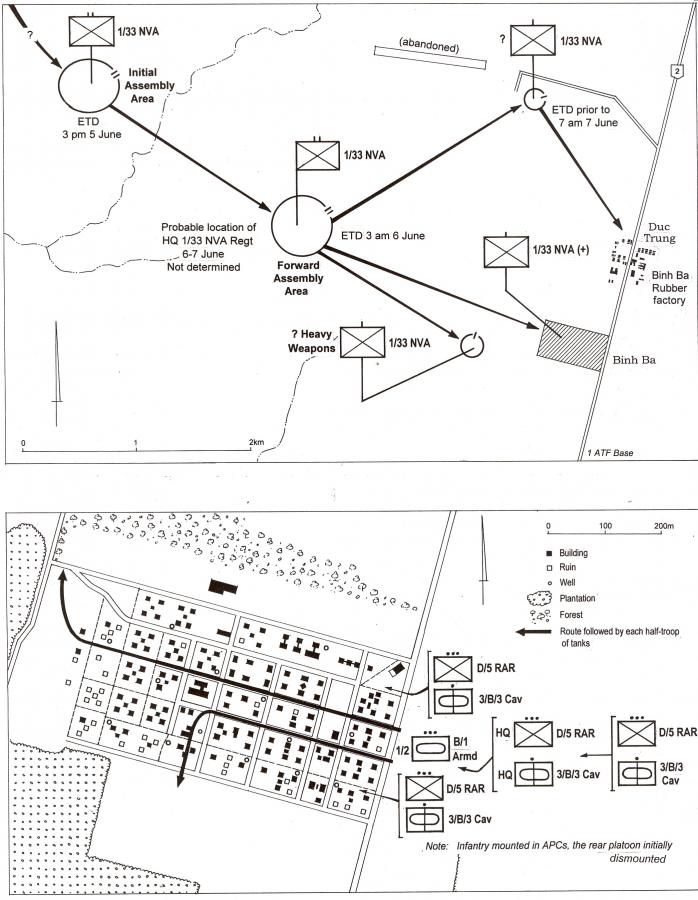 Maps of the fighting.