The Pacific war campaign fought by the Australians on Bougainville in 1944–45 has long suffered from a poor reputation: during its first few months, the operation was disparaged by politicians and the media as “mopping-up”; for decades afterwards, it was criticised as “unnecessary”.

But in his new book The Hard Slog, Australian War Memorial historian Dr Karl James argues that the arduous fight that involved more than 30,000 Australians – 500 of whom were killed – against the Japanese on the South Pacific island was both important and successful.

“Bougainville was one of the largest campaigns the Australians fought during the Second World War, and it’s certainly the most controversial in terms of the debate over its necessity,” says James. “But they did the job they were meant to do, and they did it with minimal casualties.” 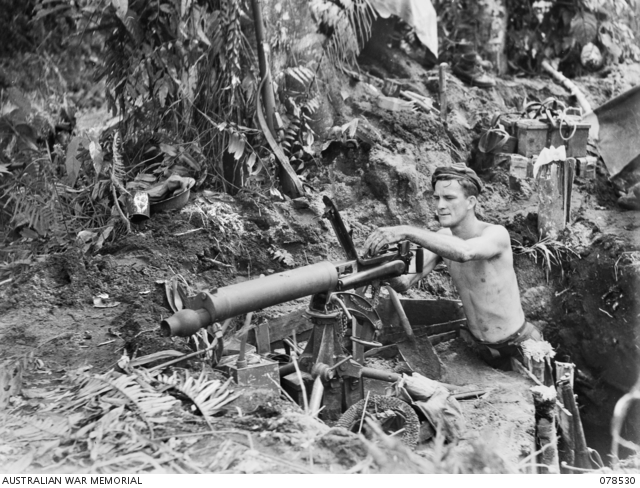 Private Gordon Atwell of the 42nd Battaltion checks over the mechanism of his Vickers gun, at Mawaraka, 20 January 1945.

The Japanese invaded the Australian Mandated Territory of Bougainville in 1942 as part of their sweep across the South Pacific. They remained there unchallenged until November 1943, when the Americans landed on Bougainville as part of the Allied counter-offensive to regain domination of the South West Pacific Area.

The Australians were brought in to relieve the Americans a year later. The war was expected to continue until at least 1946, and so aggressive operations were planned for Bougainville and New Guinea with the aim of freeing up Australian manpower for future operations against Japan, or for employment on the home front. However, critics claimed that Australian forces were being “whittled away” on a more or less “face-saving” task in New Guinea and Bougainville.

“By 1945 the Americans in the central Pacific were pushing toward Japan, having landed in Iwo Jima and Okinawa, whereas the Australians were still in the jungle in New Guinea, Bougainville and Borneo, and seem to have been sidelined from the main game rather than being at the forefront of Allied operations,” James says. “There was a lot of resentment and frustration within Australia during 1944-45, with critics wondering why we weren’t in a more prominent role.”

It was a slow and gruelling effort, fought with limited resources and in difficult tropical conditions. Over nine months Lieutenant General Stanley Savige’s Australian II Corps made tedious advances; actions were fierce, but on a small-scale, and the patrolling was constant.

“The war the infantry knew was one of patrolling along stinking, humid jungle tracks and putrid swamps in an intimate, personal war of section patrols and the occasional company-size attack,” James writes. “The strain of constant clashes with the Japanese and harassing artillery fire eroded the men’s morale.”

But it was even worse for the Japanese. “The Japanese experience of the campaign was one of deprivation, desperation and defeat. In the most extreme instances, a few even resorted to cannibalism.” 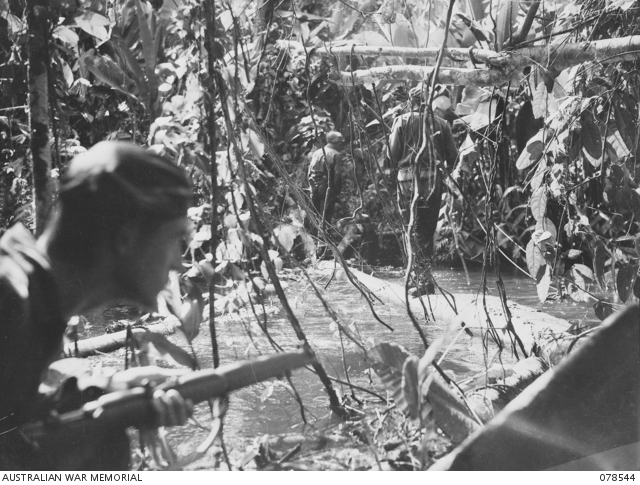 A patrol from the 42nd Battalion crosses a log bridge as it works its way through the oppressive jungle.

The Australians suffered just one defeat during the Bougainville campaign, at the Porton Plantation in the island’s northern sector. An amphibious landing on the night of 8–9 June 1945 went awry: the landing was in the wrong place, an essential supply barge was grounded on the rough coral that surrounded the beach, and the Japanese were able to get in reinforcements that gave them control over the area. Dozens of Australian troops were stranded on the beach, and when rescue craft were sent in to get the men, they also became stuck on reefs. Men tried to swim through the shark-infested water to safe ground. When the ordeal was over, 27 men had been killed or were missing, and 69 were wounded.

The Bougainville campaign came to an end when the Japanese surrendered on 15 August 1945. The objective set by senior Australian commanders for “destruction” of the Japanese had not been fulfilled, but II Corps could claim to have controlled about two-thirds of Bougainville. About 65,000 Japanese occupied the island when the Americans arrived in 1943; at surrender, there were just over 23,800. The Australians had killed 8,789 Japanese during the nine-month campaign, and the Americans estimated they had killed about 9,890. Many thousands of Japanese had died from sickness and disease. Australian deaths on Bougainville numbered 516, and another 1,572 were wounded.

While the Bougainville campaign did not change the outcome of the war, nor help it end any sooner, James says its importance lay in fulfilling the Australian government’s political and strategic agenda “of having Australian forces actively involved in the liberation of Australian territory”. It also ensured a favourable postwar position for Australia among its allies, and in the distribution of the spoils of war.

“The war ends, fortunately, just before the Australians make that last attack on the big Japanese base at Buin. I think that had that happened, we would have seen the outcome of the campaign as being quite different. We would have had heavy casualties for little gains. Because the war ended when it did, I think you can judge it to be a successful campaign.”

The Hard Slog: Australians in the Bougainville Campaign, 1944–45, by Karl James, is published by Cambridge and available at the Australian War Memorial bookshop or online at /shop/ 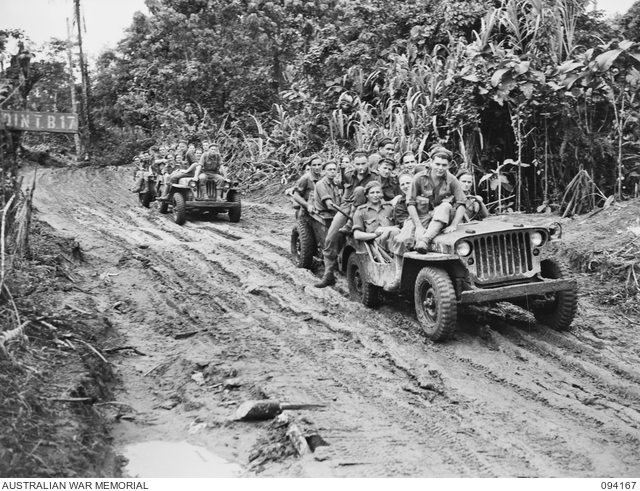 Jeeps and trailers loaded with members of the 58th/59th Battalion make their way along the muddy, corduroyed Buin Road near the Ogorata River, 18 July 1945.