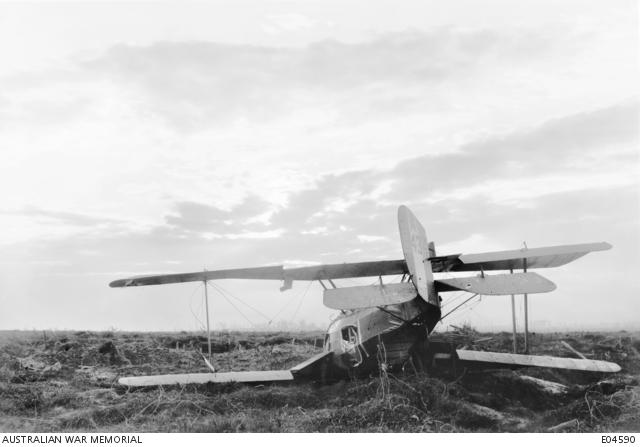 A wrecked D.H.5 Serial A9434 near Railway Dugout in the Ypres Sector.

Dogfights and daring feats define the way we remember the airmen of the First World War. Popular imagination has been captured by the aces that ducked and dived in aerial duels with the enemy, notching up “kills” and narrowly avoiding crashes to return to their squadron as instant heroes.

But for many airmen, the reality of the air war was not so glamorous and there were many casualties. Planes were fragile and highly flammable, and parachutes were not provided. In the Australian Flying Corps (AFC), one in five pilots and observers were killed in training, air crashes or air combat.

A small group of airmen defied the odds after being shot down or crash landing, and became prisoners of the Germans or the Turks. At a history conference in Victoria last week, Australian War Memorial historian Aaron Pegram presented his research on the 35 AFC airmen who saw out the war in captivity.

“Those airmen whose machines were chalked up as ‘kills’ by enemy pilots have received less attention than what they deserve, and among them were prisoners of war,” he said. “Captivity plays such an important part in the Allied airman’s story of the Second World War, but it barely registers in the memory of what air combat was like a generation earlier.”

The first Australian airmen to participate in the war went into action in Mesopotamia in April 1915, and the first complete flying unit of the AFC, No. 1 Squadron, were sent to the Middle East in March 1916. Among their ranks were some of Australia’s aviation pioneers.

By late 1917 three more squadrons – Nos 2, 3, and 4 – had been formed to fight in France. A further four training squadrons were based in England to provide pilots for the Western Front.

The first aircraft flown by Australians were inferior to German aircraft, but by late 1917 the allies were equipped with stronger and faster planes. Aircraft were used in a variety of roles: for reconnaissance or artillery spotting, as fighters or for bombing operations inside enemy territory.

Aircraft were either twin-seater or single-seater, the latter being the “scouts” or fighters that went head to head in dogfights over enemy territory. Twin-seater aircraft contained a pilot and observer, who might also perform a bombing role.

A total of 410 pilots and 153 observers flew operations with the AFC, of which 110 died from combat-related causes.  Of the 35 Australian pilots and observers of the AFC taken prisoner during the First World War, 14 were captured by Ottoman forces in the Middle East, and 21 on the Western Front in the war against Germany.

“These considerably small numbers reflected the extremely hazardous nature of aviation at a time when death was more a likely outcome for air casualties than capture by the enemy,” Pegram said. “But if an airman managed to survive a landing in hostile territory, and was captured, the chances of him surviving the war as a prisoner were remarkably high.”

Airmen were treated relatively well by the Germans or Turks upon capture, more so if they were wounded. “The Germans probably had less sympathy for an Allied airman who wasn’t wounded, because ground troops were often strafed and bombed by them. There are instances where airmen were kicked, slapped, beaten and verbally abused.”

In Palestine, there was one instance where a captured Australian airman was given a tour of Jerusalem by the Albatross pilot who had brought him down. The German pilot, Gerhard Felmy, later flew over No. 1 Squadron’s airfield and dropped a photograph of himself with the Australian pilot Claude Vautin to let them know he was alive and well. 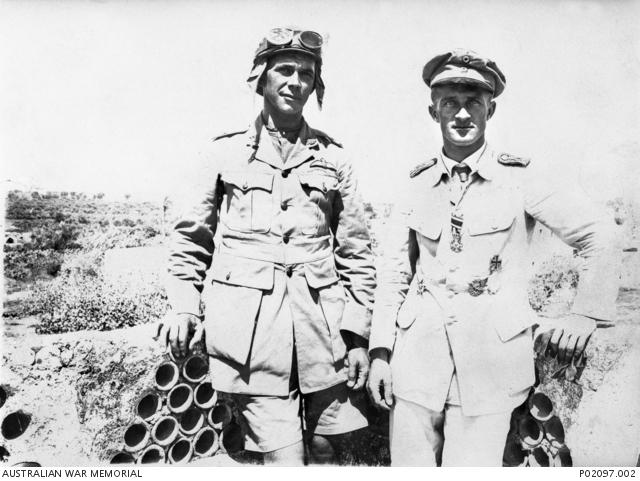 But the treatment of airmen who fell into the hands of the Arab tribesmen in the desert could be a lot worse: one of the four Australian pilots with the Mesopotamian Half Flight was killed by Arab tribesmen after landing in Ottoman territory; two others were assaulted with clubs, rifles, axes, and hammers before the Turks arrived and took the Australians prisoner.

The German Air Service conducted all interrogations. Allied airmen were considered a great source of intelligence to the enemy “because they were flying some of the most advanced technology of the period, they had a good sense of geography, great technical capabilities, and they knew the nature of operations,” Pegram said. “By comparison, the standard infantryman would have known next to nothing.”

Pilots were well informed of the techniques enemy intelligence staff used to extract information from prisoners, and “to prevent their machines from being captured, studied, salvaged or pressed into service by enemy forces, Australian pilots flew with a flare pistol in their cockpits so that a disabled aircraft and any maps, letters or operations documents could be set alight after a forced landing”.

The captured airmen were detained in a prison camp in the homeland of their captors. Conditions for prisoners in Turkey were primitive: their quarters were cramped, rations were basic and Red Cross food parcels would go missing or be delayed for several months. One Australian pilot, Thomas White, managed to escape. In June 1918, White stowed away on a Russian merchant ship in Constantinople harbour bound for Odessa in the Ukraine. He eventually made his way back to London.

Airmen captured in Germany were treated much better, and some were even given parole on the understanding that they would not attempt to escape. But, overall, the imprisonment of AFC pilots and observers – all officers – was tolerable, and when the war ended on 11 November 1918, all 35 Australian airmen captured in Mesopotamia, Palestine and on the Western Front were alive.

“Their humble experiences behind barbed wire were not as glorious or as well -known as the deeds of the leading air aces of the war, many of whom were killed in their pursuit of triumph,” Pegram said. “But the experiences of the AFC’s captured airmen reminds us of the harsh realities of aerial combat when aviation was in its infancy, and of the certainty that not all who took to the skies became the stuff of legends.”

The papers from the Military History and Heritage Victoria conference, By the seat of their pants: Australian airmen and their aircraft 1915–1918, will be published by the Office of Air Force History.