'This is something exceptional' 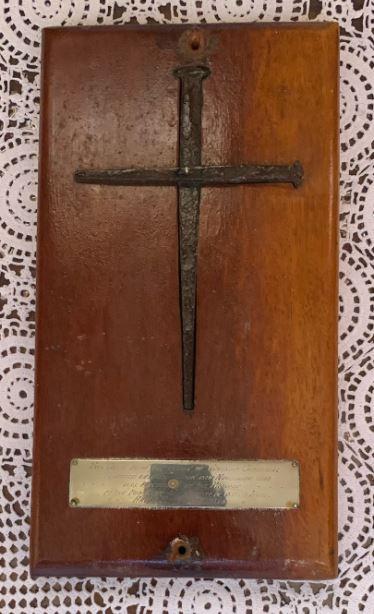 It’s a simple cross of nails mounted on a small wooden plaque.

But the story behind the cross and how it came to be a powerful symbol of peace and reconciliation after the Second World War is a poignant one.

The cross is believed to be a Coventry Cross of Nails, made from nails salvaged from Coventry Cathedral in England after it was destroyed by German bombing in November 1940.

It was discovered at St Paul’s Anglican Church in Hay, NSW, and gifted to the Australian War Memorial recently by the Anglican Diocese of Riverina at a service at St Alban’s Cathedral in Griffith.

Emily Hyles, an assistant curator at the Memorial, said it was extremely rare to find a Coventry Cross of Nails in Australia, and the only other known example is at St David’s Cathedral in Hobart.

“This is something exceptional, a truly significant object,” Hyles said.

“Until last year only one Cross of Nails was known to exist in Australia. I went to Griffith in July last year to see another war relic in the church. This was part of the portico from St Paul’s Cathedral, London, which was damaged during the Blitz – when very unexpectedly, Reverend Dean Rob Harris brought out a Coventry Cross of Nails that had originally come from St Paul’s, Hay, and asked me if I knew what it was.”

At 7.20 on the evening of 14 November 1940, the first wave of more than 400 German bombers appeared over the industrial city of Coventry as part of Operation Moonlight Sonata.

Over the next 11 hours, more than 500 people were killed; three-quarters of the buildings in the city centre were obliterated; a third of the factories flattened; and more than half of all homes were destroyed. In the medieval heart of the city, the 500-year-old cathedral was left in ruins; only the outer shell of the walls and the tower remained standing.

“The raid on Coventry was the most concentrated attack on any British city till then,” Hyles said.

“The first wave of German bombers dropped thousands of magnesium and petroleum incendiary bombs, setting the city alight. Hundreds of fires burnt across the city, and at around eight o’clock, Coventry Cathedral began to burn. Volunteer fire fighters managed to put out the flames, but direct hits followed and the fire quickly spread out of control.

“Then at 9.30 pm, 500 tonnes of high explosive bombs were dropped, flattening buildings and cratering roads. Gas and water mains, the electricity supply, houses, buildings and factories were destroyed.

“The scale of destruction was awesome.”

The raid continued into the morning of 15 November, and the Luftwaffe was so pleased with the huge scale of destruction that it coined a new verb, ‘to Coventrate’: meaning to reduce a city to rubble, almost obliterating it by air through concentrated bombing.

“It was a perfectly planned and executed attack designed to cause maximum devastation,” Hyles said.

“The operation went so well the Luftwaffe had time to film the attack; and not a single German bomber was shot down.” 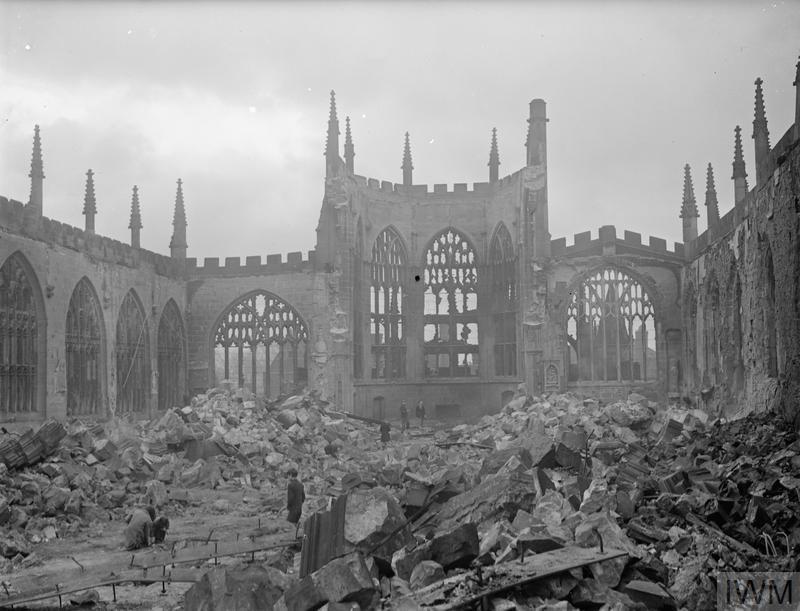 The ruins of Coventry cathedral two days after the German Luftwaffe air raid on the city on the night of 14 November 1940. Photo: Courtesy Imperial War Museum © IWM H 5603

In the days that followed, two powerful symbols emerged from the ruined cathedral. Two charred roof beams had fallen in the shape of a cross, and the cathedral’s stone mason bound them together and placed them where the altar had been. A local priest then took three of the long medieval nails that had held the roof together and fashioned them into what was to become the original Cross of Nails.

After the war, crosses made from the iron nails, known as roof spikes, were gifted to churches and organisations around the world as a symbol of destruction and forgiveness. These became known as the Coventry Crosses of Nails, a potent sign of friendship and hope in the postwar years.

How a Coventry Cross came to be in the small NSW town of Hay is unknown, but it is believed to relate to the service of the Reverend James Hardingham.

Hardingham enlisted in the AIF in December 1914 and landed on Gallipoli with the 7th Battalion on 25 April 1915. He was shot through the lower leg two weeks later and treated at Malta before returning to the peninsula two months later. In the heat of the August offensive, he suffered deafness and enteric fever, and was sent to hospital in Alexandria.

Invalided to Australia in late 1915, Hardingham recovered at St John’s Theological College in Melbourne and was ordained as an Anglican priest two years later. He took appointments at Beaudesert, Port Pirie, Adelaide, and became the Archdeacon at Hay in 1940. The following year he enlisted for service again and was appointed as an Army chaplain. He remained at Hay for the duration of the war, ministering to both the town population and the internees at the Hay prisoner-of-war camp.

“I feel certain Hardingham had an affinity with those prisoners,” Hyles said.

“His own son Malcolm had enlisted in the army in July 1940 and was appointed as a driver in the 8th Division Ammunition Sub Park, responsible for the transport of ammunition to each division.

“Malcolm Hardingham was captured by the Japanese at the fall of Singapore, taken prisoner, and died a wretched death slaving on the infamous Thai–Burma railway. He was 22.”

At Hay, Reverend Hardingham commissioned local Italian prisoners to make six ornate wooden candlesticks for his church. Hyles  believes it is likely that Hardingham acquired the Coventry Cross after the war as a symbol of destruction and absolution.

“Reverend James Hardingham believed in God and in Empire, and clearly in forgiveness,” she said.

Hardingham died in February 1962, and is buried in the crypt in the Warrior Chapel of St Margaret’s, Mildura. The words on his tomb read ‘Here Lies an Anzac’ with a rising sun, his name, rank and battalion.

The Cross of Nails was rediscovered when St Paul’s, Hay, was deconsecrated in 2020, and its furnishings were rehoused at churches and museums in NSW. The cross was sent to St Alban’s Cathedral, Griffith, the mother church of the diocese, and is now part of the National Collection at the Australian War Memorial.

“This is a truly significant object,” Hyles said.

“It tells a powerful story in both a global and a very local context. It spans two world wars and is a small but powerful example of the depths of human behaviour and what man is capable of.

“It not only speaks to the intensity of destruction on that night in November 1940, but it also tells the story of post-war reconciliation by civilians deeply affected by war.

“It will assist our visitors to remember, interpret and understand our experience of war and its enduring impact on Australian society.”