'You just tried your best to keep yourself alive' 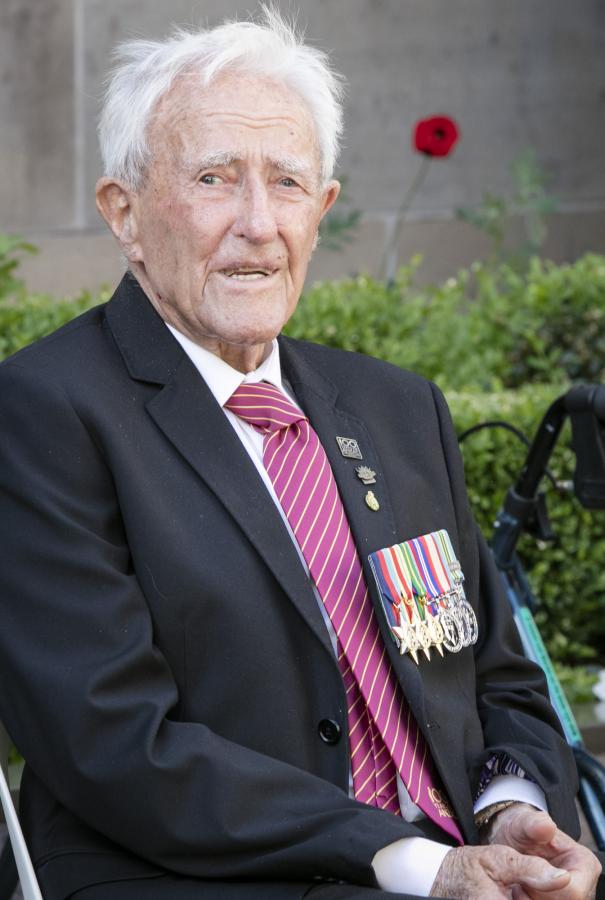 He was cut off from his platoon for 14 days with only a couple of biscuits to eat, and was shot by the Japanese at Kokoda. But Cyril Allender, now 98, still considers himself to be lucky.

“There were 13 of us and we got cut off. We had to fight our way through the bush to try and get in front [of the Japanese]… We got to the Japs when they started to say that they’d had enough and they turned around, so we were lucky that day…  It was just one of those things…

“You just tried your best to keep yourself alive."

For Allender, the memories of the Second World War remain vivid and he will never forget hiding from the Japanese in 1942 as he and his mates fought their way through the jungle to get back to their platoon.

“We were given two biscuits each that was to last us whatever,” he said in an interview with the Australians at War Film Archive.

“And so my mate Johnny Adams, we were very good friends, he said to me, ‘Well, you can have the biscuits because if I take them I will eat them today.’ So that was okay, so I used to break a piece off and say, ‘Johnny, there’s your breakfast.’ ‘There’s your dinner.’

Today, Allender laughs as he remembers being shot during the fighting in the Owen Stanley Ranges.

“We were pinned off and we were getting shot at. We had to go around [the Japanese], so we got in there, and we were not very far apart, about three or four yards away ... We were pinned down there and my mate Johnny Adams … was laying down and I didn’t realise what was happening to me. The bullets were all hitting under [the trees near him] and they were … just going past the top of my head …

“All these bullets were hitting [just near his chin] and putting all the dirt all over his face, and I said to him, ‘Move from there you silly B, you are going to catch one of them in a minute.’ And while I was saying that, this bullet came from the other way, and it got me in the toe.

“I was jumping around, and he was saying, ‘Get your bum down, you silly bugger.’

Allender, who was visiting the Memorial as part of commemorations marking the 75th anniversary of the campaign, enlisted in June 1941 because he “thought it might be a bit of fun”.

“Put it this way,” he said with a laugh. “My friends were joining and I thought, well I’d go with them. It was as easy as that.” 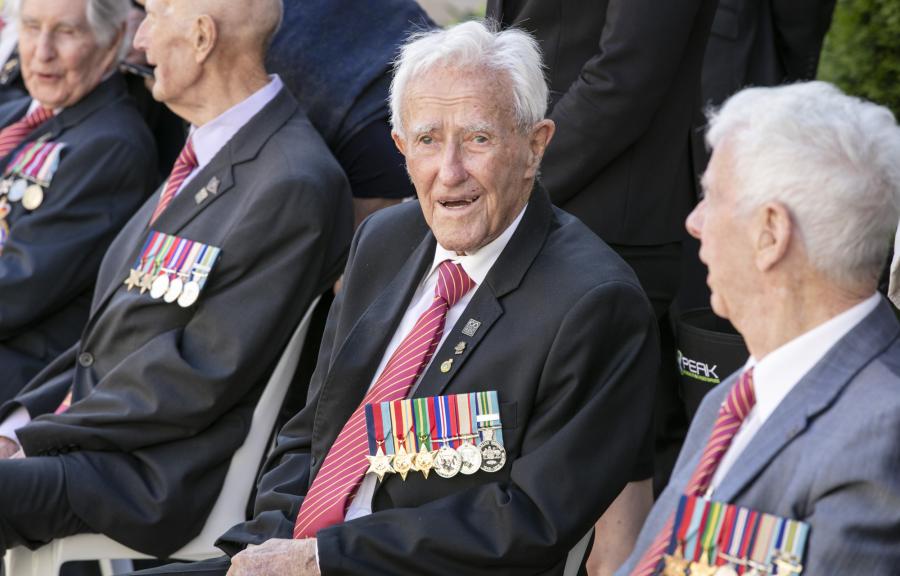 He joined the 2/16th Battalion and celebrated his 22nd birthday while sailing to the Middle East. There, he was posted to the 2/14th Battalion in November 1941. The battalion was sent to Port Moresby in August 1942 and marched along the Kokoda Trail to confront the advancing Japanese.

The battalion's first clash with its new enemy took place at Isurava on 26 August, but after holding there for three days it was forced to withdraw. The retreat back along the Trail was characterised by bitter, desperate fighting, none more so than that which occurred at Mission Ridge between 6 and 8 September. The 2/14th’s ordeal on the trail ended with its relief at Imita Ridge on 16 September.

“It wasn’t very nice,” Allender said with a laugh. “First of all, we slept at the bottom of the mountains at the start of the Kokoda Track … and they said it had 1000 steps, and the steps were like this, and this, and this.”

He uses his hands to show how the steps all differed in size and shape.

“We got to the stage we had to go around them because with all the stuff we had on our backs, we couldn’t get up to the next step,” he said. “You’d try and get around them, and there were a thousand of them, and it was 5,000 feet to the top, and by the time I got up there, I was a bit tired.”

Allender laughs at the thought, his sense of humour as strong as ever. He likes to laugh, and he laughs often, but he goes quiet as he talks about the battle of Isurava. More than seven decades later, the memories remain vivid.

“They don’t go away,” Allender said. “There was a photo just a moment ago, and he was a bloke who fought alongside me. He got a VC.”

The photo is of Private Bruce Kingsbury, who was killed on 29 August 1942, and was posthumously awarded the Victoria Cross for his actions at Isurava.

Allender returned to Australia in December 1942, but was back in New Guinea for the Ramu Valley and Finisterre Ranges campaign of 1943–44. He fought on Shaggy Ridge as a Bren gunner, but was evacuated with malaria, and later served during the 2/14th Battalion’s last campaign of the war, landing at Balikpapan on 1 July 1945.

“So what you had to do,” Allender said. “You had to try to help your mates as well, and get them out of trouble.”

He can still see his friend Wally Clarke leaning on his elbow on the ground, and having a talk to him while he rested. “Wally Clarke had two babies,” Allender said. “And Wally Clarke asked me, would I look after his rosary beads? I said, ‘Oh, yeah, okay.’ And, what for, I don’t know. And he was killed the next morning right in front of me.”

Allender met with Clarke’s sons last year, but still has no idea why Clarke gave him his rosary beads. He has wondered ever since whether they helped keep him safe during the war.

“Seeing some of your friends getting killed alongside of you, and all that sort of thing, was not very nice,” Allender said quietly.  “And I’m one of the ones who are still here. I can’t [explain] that. I don’t know [why]. I had seven killed in five minutes alongside me... They were in a row… and five or six of them [were] killed straight away. But I’m still here, so I was a lucky one.”