Warning: the following story discusses suicide and post-traumatic stress disorder. If you or someone you know needs help, support is available at Lifeline on 13 11 14 or Beyond Blue on 1300 22 4636. If you are an Australian veteran or family of a veteran, you can also call Open Arms, Veterans & Veterans Families Counselling Service, on 1800 011 046. 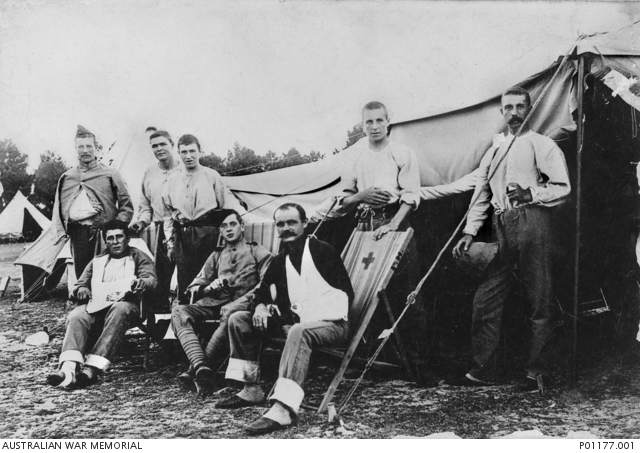 South Africa, 1900. A group of soldiers wounded in the Boer War.

An Australian soldier tries to take his own life on the way home from South Africa.

It’s 1902, and the young man has been deeply affected by his experiences during the Boer War.

He is committed to an asylum in Australia and eventually released … his suicidal behaviour having been attributed to a bad case of the measles.

Historian and author Dr Effie Karageorgos is a lecturer at the University of Newcastle’s School of Humanities, Creative Industries and Social Sciences. She learnt of the man’s story as part of her research into the social history of war, and war-related trauma.

“There's a large file about him in the National Archives,” Dr Karageorgos said.

“It’s an incredibly sad file. He was put in an asylum, and after his release the military in a way wanted to demonstrate that [his mental state] was actually hereditary … because this was the idea at the time.

“They interviewed people on the ship he came back on; and they were saying, ‘No, no, he seemed fine on the ship, it had nothing to do with the war.’

“He gets out of the asylum … But this poor guy didn't even get to talk to them … and then eventually their final observation of him concluded that the ‘madness’ didn't come from the war, but from the fact that he got measles while in Africa.

“And that was it. That was the last word on this poor guy. I couldn't find anything else about him … He didn't go back to the asylum, and he certainly didn't get a pension.

“He was one of the forgotten soldiers, of which there are many from the South African war.” 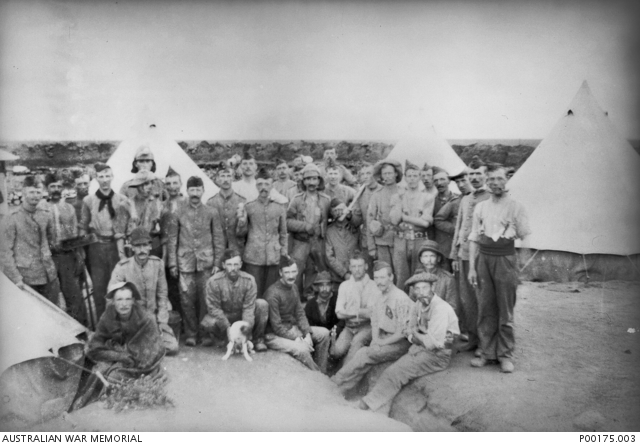 A group of unidentified soldiers in South Africa during the Boer War.

Dr Karageorgos uncovered his story while examining asylum records across Australia as part of her research into the Boer War and its impact on the men and women who served there.

Her PhD dissertation, Australian Soldiers in South Africa and Vietnam: Words from the Battlefield, was published by Bloomsbury Academic in 2016.

She has also studied war-related trauma during and after the First World War, and is currently researching the period from the Second World War to the 1991 Gulf War.

Her grandfather, Kosta, had lived through the Second World War in Greece and was studying at university in Thessaloniki in northern Greece during the Greek Civil War in the 1940s. His brother George was killed fighting for the Communists, while Kosta’s support for the Communist forces ended his universities studies, stifled his job prospects, and led him to seek refuge and work as a factory worker, and later as a civil servant, in Australia.

It was her family’s experiences that inspired her to complete her PhD in history. She spent years examining pension records, repatriation files, and asylum documents to build up a picture of how Australian soldiers were affected by their service during the Boer War. 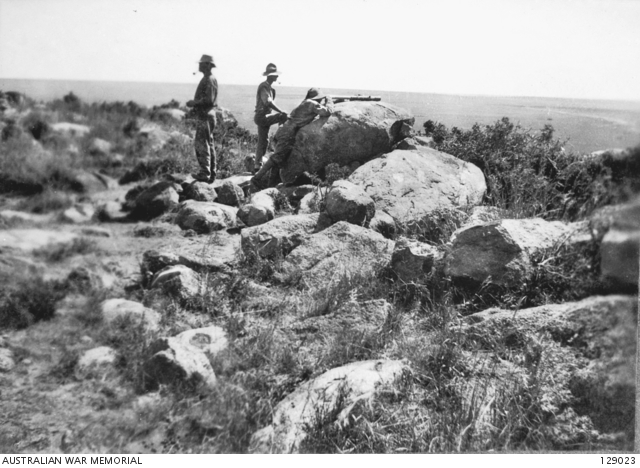 South Africa 1899-1902: An outpost on duty near Klerksdorp during the South African War.

“At that time, there was no real connection being made between war and mental health issues – or madness, insanity, lunacy, as it was called then,” she said.

“In Britain, they had established special hospitals for men who were suffering from mental health conditions postwar … after the Crimean War … and this came up in the US after the American Civil War as well.

“During the American Civil War [in the 1860s], it was called ‘nostalgia’… and different names have been given to it at different times.

“There are even records from ancient Greek times of men suffering mental health issues that at the time would just have be seen as ‘madness’.

“But in Australia, late in the 19th century, in the colonies, there wasn't this connection being made.

“Federation is in 1901, and the Boer War ends in 1902, so there’s this view that we're a strong ‘new’ nation and that this [mental breakdown in Australian soldiers] is not possible for us.” 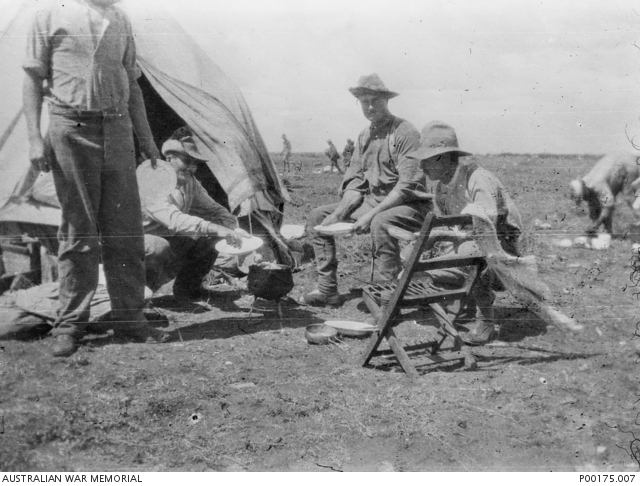 South Africa, c1900: A group of soldiers cooking a meal outside their tent in South Africa during the Boer War. 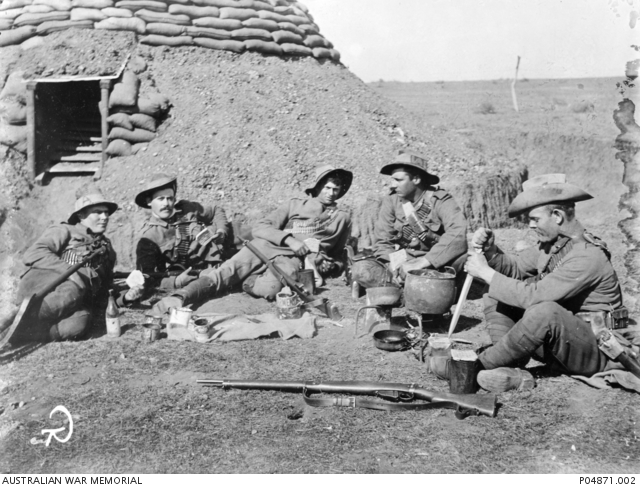 South Africa, c1902: Soldiers having a break and a meal in South Africa during the Boer War.

Psychological and neurological reactions to the trauma of war are as old as the history of human conflict itself, but in the early 1900s in Australia, psychological trauma was rarely linked with military service, and even if it was, specific treatment was rarely made available to those who were suffering.

“It was seen as akin to weakness … as a feminine condition,” Dr Karageorgos said.

“So if men were demonstrating signs of ‘madness’, it was frequently attributed to other things.”

She tells the story of a soldier whose ‘madness’ was attributed to ‘poor drinking water’ in South Africa. Another soldier sought help from a military doctor because he was unable to work as a result of his suffering after the war.

“Eventually, in 1907, they say he's suffering from neurasthenia.

“Neurasthenia was a condition that had come up in the late 19th century and had been observed in the US and other places.

“It was traditionally seen as a working man’s illness … something that was caused by modern civilisation … but it causes nervousness, so it's a mental health condition.

“It was considered more respectable than other conditions like hysteria.

“Of course, by then, there's no way this man was going to get a pension … five years after the war.

“It was hard enough for soldiers to get a pension after the South African war, so this man really suffered … and that was the last that I heard of him.” 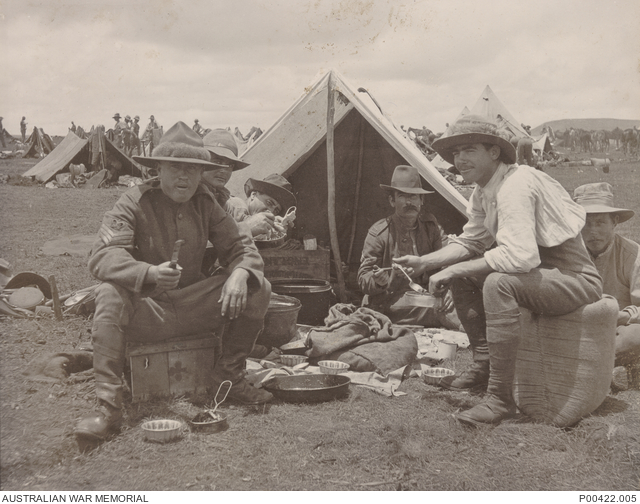 Australian civilian medical authorities in the late nineteenth century saw ‘insanity’ as hereditary or as a sign of moral weakness.

Soldiers at the time were seen as the epitome of national virility and masculinity, combined with the late 19th century ideal of rural “bush” manhood.

“For a long time, throughout the early 20th century, doctors were very sceptical of the science of psychology, which was very new, and of psychologists.

“Not many Australian doctors even concerned themselves with it. There was this view that… it was caused by a physical condition … that they’ve had some kind of physical disease that caused them to act in this way.

“For example, at that time, tropical neurasthenia was a diagnosis given to white colonists who had gone into the tropics in a traditionally non-white country and couldn't deal with the heat [and started demonstrating symptoms of mental illness].

“Even during the South African war sunstroke was a [diagnosis] that was sometimes used by Australian doctors if men went down with ‘nervous’ symptoms.‘

“If they're a man, and they're an Australian man and an Australian soldier, who's supposed to be the pinnacle of rough masculinity, there's no way they could be ‘mad’. 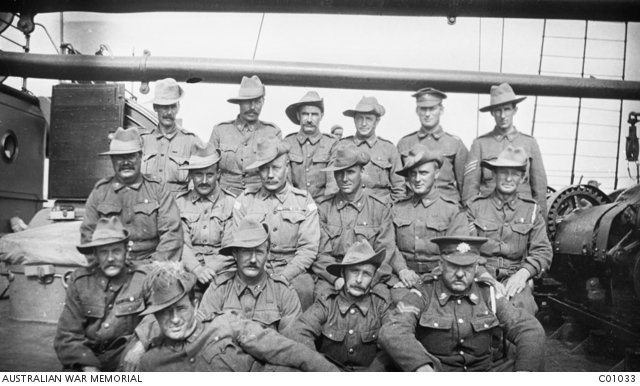 Informal group portrait of unidentified Australian soldiers most of whom served in the Boer War and were returning home after serving in France during the First World War.

“But when you really look into what happened on the battlefield, and how doctors were going back and forth with diagnoses, seeing men who were traumatised, and then trying to figure out what they had in relation to what they saw in Australia, and what they knew in their training, it was a mess.

“Doctors were coming into the war with preconceived ideas of what mental illness was, so it's not a clean cut story …

“The first conclusion made on shell shock was actually that it was caused by miniature pieces of shell making their way into soldiers' brains somehow. It's incredible, and it’s just really, really far-fetched to us now, but they were clinging on to this idea that there must be some physical backing to a mental health condition. It's like no, it's very microscopic parts of shells, lodging themselves in soldiers’ brains.

“When you look at some of the pension records from the First World War… [men with] mental health conditions … [are seen as] trying to get out of the war or trying to cheat the government.

“You have these men who are really, really suffering … [and] they're essentially being branded malingerers, or shirkers, or lazy men who are just trying to get money from the government, when in fact their experiences have caused them a lot of stress. 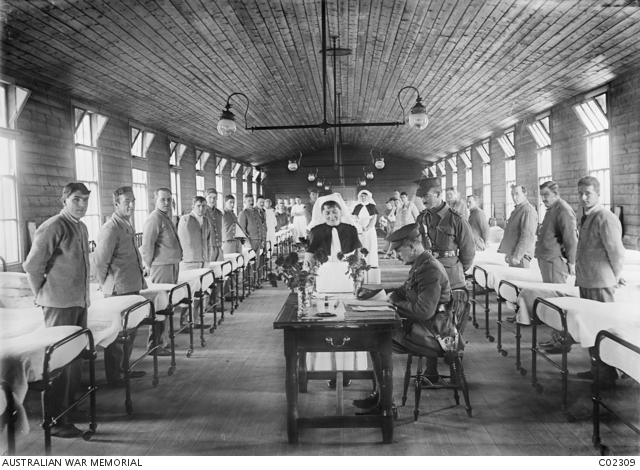 Patients, officers and nursing staff in a ward at No. 3 Australian Auxiliary Hospital in Kent. Note the 'parade like' stance of the shell-shock patients standing beside their beds.

“It's a very complex, and to be honest, a really, really sad story.

“But it wasn't until 1980 that officially PTSD was seen as a condition that wasn't hereditary, that it's something that can actually be caused by war.

“So you see a lot of ‘invisible’ suffering.

“You have these men struggling for their entire [post-war] lives and you see how their families are affected by this as well.”

The Australian War Memorial has commissioned a Sufferings of War and Service sculpture to recognise and commemorate the suffering caused by war and military service.

The sculptural installation, a field of sculpted Australian pearl marble droplets, For Every Drop Shed in Anguish, by artist Alex Seton, will be created over the next two years and will provide a place in the Memorial’s Sculpture Garden for visitors to grieve, to reflect on service experiences, and to remember the long-term cost of war and service. 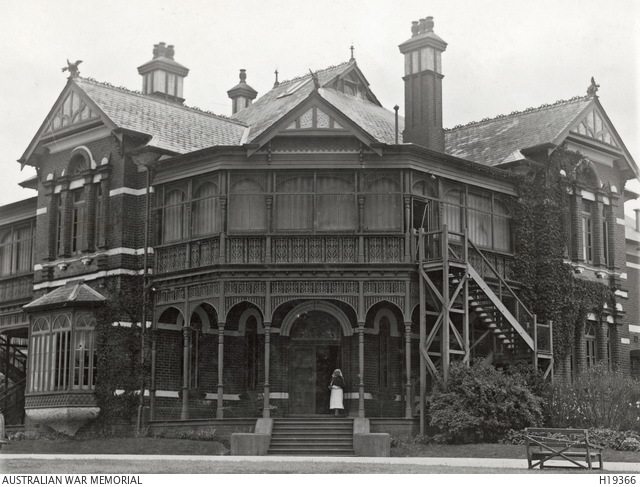 “It's a heartbreaking story, and this is the reason why I studied trauma,” she said.

“There are so many men and women who have suffered in this way and their stories have never really been told.

“They've been pushed to the side. But it's necessary…

“The Memorial is for all of us. There are people walking around now in Australia who have been affected by war … and it's important that they see themselves in this, that they don't just see this unrealistic picture of someone who withstands everything – because no human can withstand everything.

“And knowing about what happened in the past, and being as open about it as possible, is the only way to save soldiers’ and veterans’ lives now.

“For me, it's such an intensely sad story… and it’s just so important… 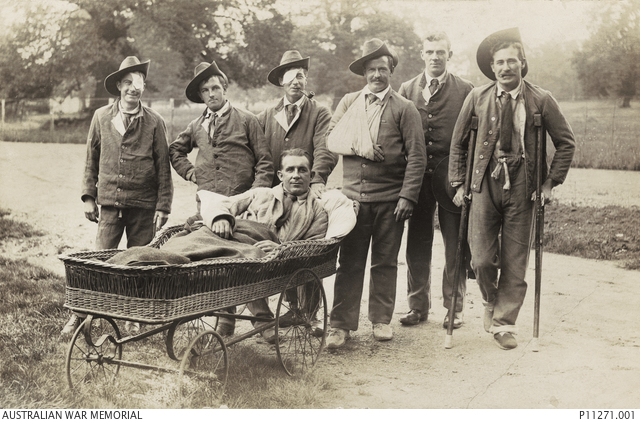 The Australian War Memorial has commissioned a work of art to recognise and commemorate the suffering caused by war and military service. The sculptural installation, For Every Drop Shed in Anguish, by artist Alex Seton, will provide a place in the Memorial’s Sculpture Garden for visitors to grieve, to reflect on service experiences, and to remember the long-term cost of war and service. A field of sculpted Australian pearl marble droplets, it will be made by the artist over the next two years and will be installed in the Sculpture Garden in 2023. For more information about the Sufferings of War and Service sculpture, visit here.

If you, or someone you know requires support, please contact:

Defence All-hours support line – The All-hours Support Line (ASL) is a confidential telephone service for ADF members and their families that is available 24 hours a day, seven days a week by calling 1800 628 036.

Open Arms – Veterans & Families Counselling Service provides free and confidential counselling and support for current and former ADF members and their families. They can be reached 24/7 on 1800 011 046 or visit the Open Arms website for more information.

DVA provides immediate help and treatment for any mental health condition, whether it relates to service or not. If you or someone you know is finding it hard to cope with life, call Open Arms on 1800 011 046 or DVA on 1800 555 254. Further information can be accessed on the DVA website.