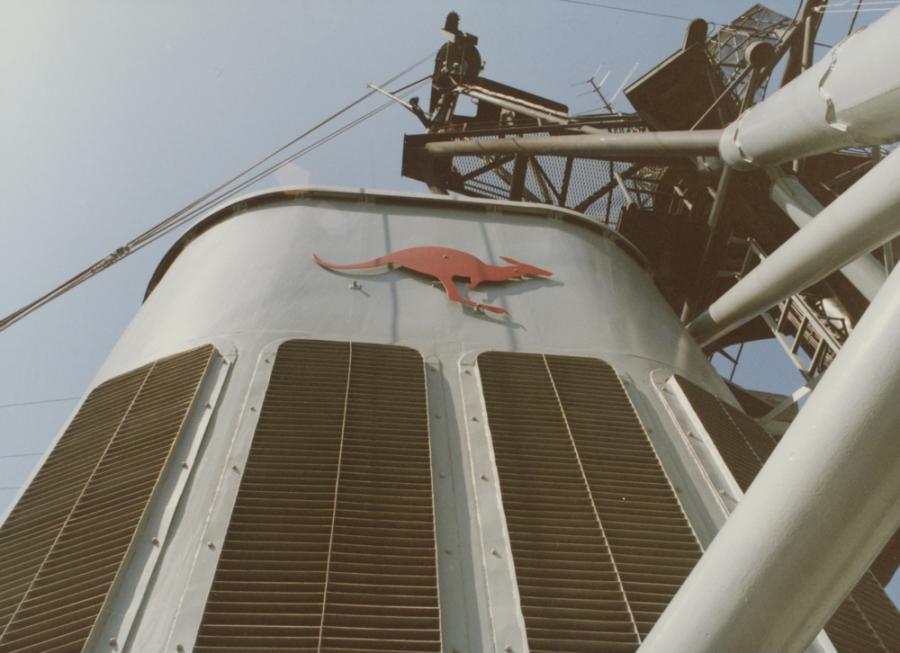 HMAS Hobart, circa 1986, wearing the plain red kangaroo on her forward funnel.

The Origin of RAN Squadron and National Insignia

The first Australian warship to carry a kangaroo emblem occurred during the First World War. As part of the original Australian Fleet Unit, HMAS Parramatta’s jackstaff was adorned with a brass kangaroo finial. Since then, there have been sporadic instances of kangaroo images and finials being used on Australian warships. Perhaps the most frequent use of these occurred during the Second World War when smaller patrol vessels, such as the Fairmile Motor Launches, displayed finials similar to that of HMAS Parramatta. During the Korean War, HMAS Anzac II mounted a brass kangaroo finial atop the mainmast as a reminder to ships in company that she was Australian. 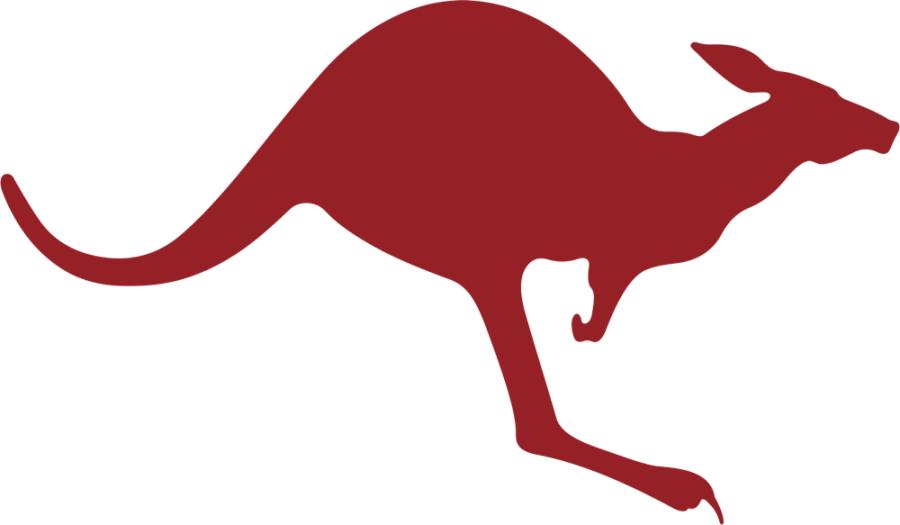 The plain red kangaroo adopted by all major fleet units in 1985.

The Origin of RAN Squadron and National Insignia

The first known instance of a red kangaroo being affixed to a ship’s funnel occurred in the mid-1950s. The RAN had converted some of their Q Class destroyers to fast anti-submarine frigates. After completing her conversion in 1955 HMAS Queenborough sailed on a global circumnavigation. While in British waters Queenborough operated with the Royal Navy’s 6th Frigate Squadron out of Londonderry, Northern Ireland. The squadron used the Red Hand of Ulster as a funnel emblem. To retain her distinctly Australian status, Queenborough displayed a red kangaroo on her funnel above the squadron emblem.

The use of the red kangaroo funnel insignia evolved through the 1960s and 1970s. By the 1980s it had been adopted across all the RAN’s major surface fleet units. It remains in use today.

Australian submarines and minor war vessels also adopted funnel insignia. When in harbor, Oberon class submarines displayed the Oberang – a white letter O with an entwined red boomerang – on either side of their fin. Collins class submarines later substituted the O for a C with the same red boomerang. Thie C-merang is worn in harbour at the top of the fin and on a cover placed over a forward array on the casing.

RAN patrol boats display a funnel insignia which indicates the geographic region to which they are home-ported. Today patrol boats are based in Cairns and Darwin. Cairns ships wear a motif of a blue marlin within a surrounding golden sun, while those home-ported in Darwin display a black image of the head of a water buffalo.

From the 1960s patrol boats were home-ported in a variety of regions. Those in Sydney adopted a red kangaroo superimposed over an image of the Sydney Harbour Bridge while HMAS Stirling, based in Western Australia features a black swan; boats in Adelaide feature an Australian piping shrike; in Hobart a Tasmanian Devil; and those based at HMAS Cerberus in Victoria feature Cerberus, the three-headed hound of Greek mythology.

The mine countermeasures squadron first adopted their distinctive funnel insignia in the mid-1970s. It consists of a black buoyant sea mine with a red kangaroo overlaid; the design remains in use today.